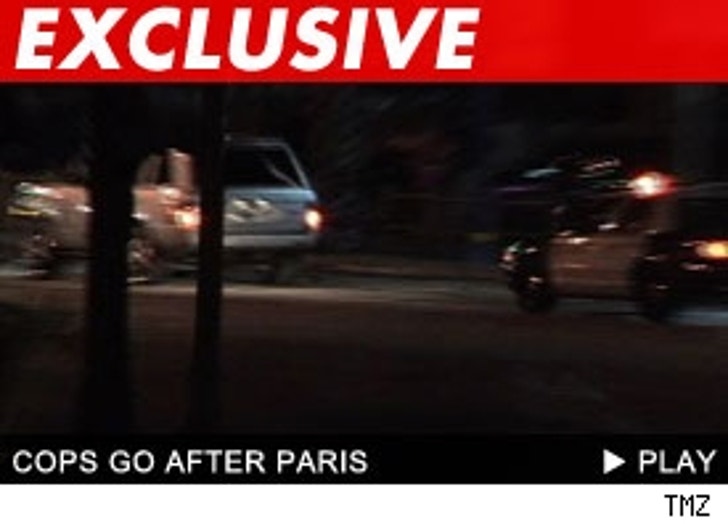 Paris Hilton had a run in early Wednesday morning with the Los Angeles County Sheriff's Department but, in the end, Hilton got nothing more than a warning.

TMZ cameraman Josh Levine spotted Paris' Range Rover at 1:50 a.m. Wednesday on Sunset Blvd. in West Hollywood. Levine noticed that a patrol car was following her vehicle -- which was moving quite slow -- for a block with it's emergency lights off. Then the flashing red lights lit up the street and, according to Levine, "Paris booked it."

Levine ran for three blocks, then turned up a side street where he saw the patrol officer and Paris' vehicle. The officer did not ticket Hilton and allowed her to leave.

TMZ spoke with the officer who stopped Hilton, Deputy Rudy Acevedo. He said Hilton was driving by Privilege, a nightclub, and began slowing down, stopping, slowing down and stopping again in traffic. Acevedo says Hilton did speed up when he turned on his emergency lights, but a block later he directed her on his loudspeaker to turn right, and she did.

Acevedo says when Hilton stopped, he walked to her vehicle, recognized her and did not observe any signs of intoxication. He told her what she did and said she could have caused an accident. Acevedo says Hilton was "remorseful" and he let her go with a warning, something he says he does 80% of the time.

Incidentally, Deputy Acevedo will appear on an upcoming reality show about cops on the Sunset Strip.