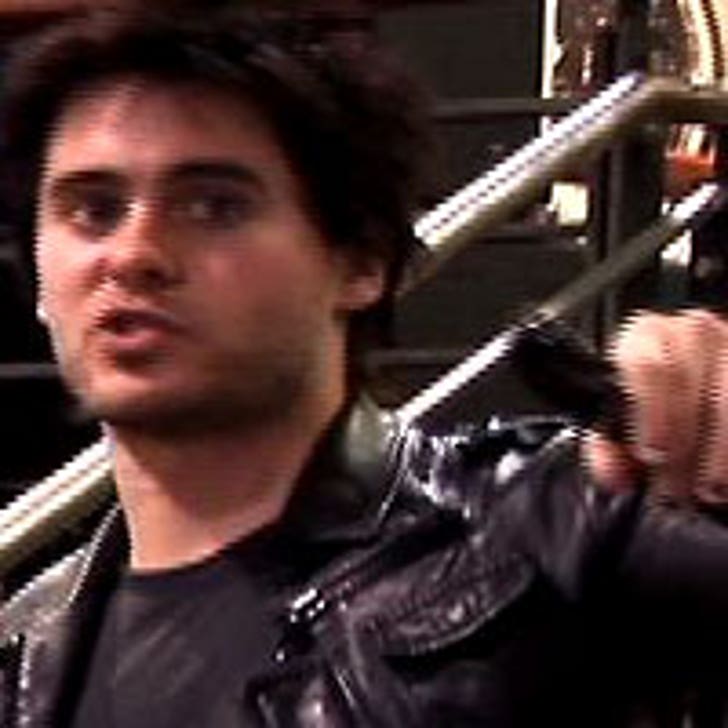 Jared Leto and his band Thirty Seconds to Mars are riding high these days. The band is nominated for two awards at this year's MTV Video Music Awards and are now wrapping up their spots on the always fun Warped Tour. The last time we checked in with Leto and crew they were shilling for votes to try and win a gig at this year's Fashion Rocks concert. The voting ends tomorrow so it is still unclear if Jared will get to hit the stage with music heavyweights like Kanye and Elton John. They face some tough competition, particularly from Angels & Airwaves and the Pink Spiders. Nevertheless, win or lose that competition, one place you will see Leto is on the "mockumentary" series "the PA" on Fuse. The show follows the life of two Fuse production assistants, Josh and Dave. In an upcoming episode, the two bumblers attempt to interview Leto while he's visiting another Fuse set. Leto gives the guys some interviewing tips:

"You guys want to get a good interview with someone, you have to get up close and personal, not be afraid to get into their personal space," Leto tells Josh and Dave. But when Josh takes his advice and sits on the arm of Leto's chair to ask his questions, the peeved Leto states, "But, you don't have to rub your leg against me so much."

The exchange takes place as Jared explains that doing interviews are his least favorite part of celebrity. Well we know some of his favorite parts of celebrity like hanging at Hyde, and something tells me that the Leto's past publicity stunts I'm betting he really doesn't mind the attention that interviews can bring. You can check out Leto on the PA's premiere episode tomorrow night, Tuesday, August 15 at 10:30pm ET / 7:30pm PT.