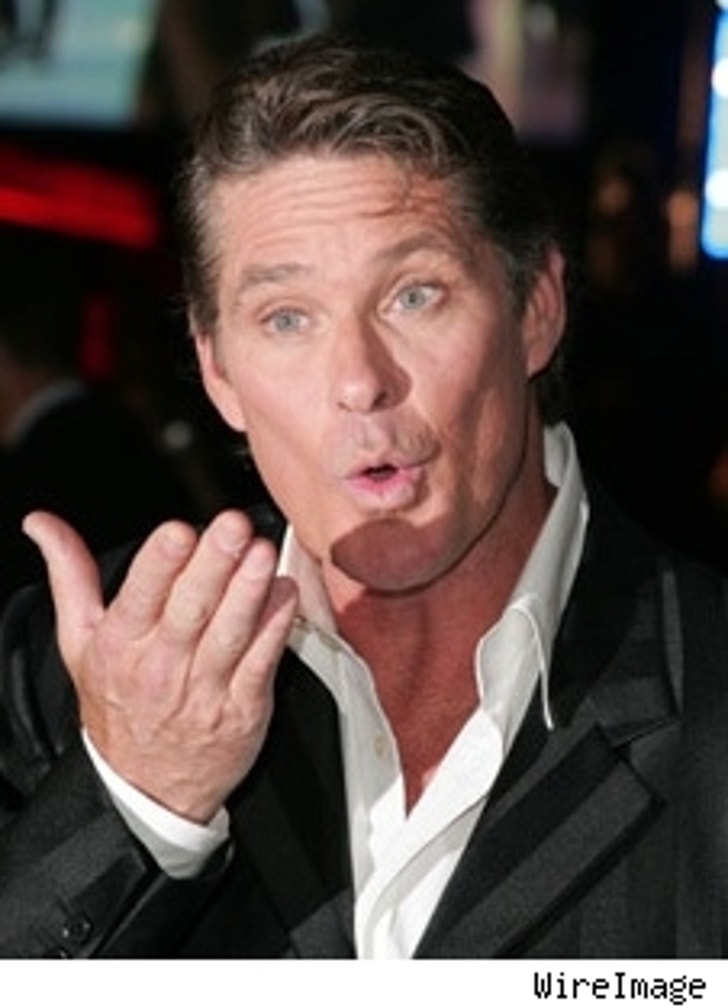 David Hasselhoff may have thought that the late Princess Diana once had the hots for him – but her butler says that's just not so. In fact, like many of us, Diana actually found The Hoff hysterically funny – to look at, that is.

A couple weeks ago, Hasselhoff said in London that Diana "was smitten with me since I was so tall ... I probably would have gone after her if circumstances had been different." But according to Paul Burrell, Di's former butler, Hasselhoff's talking complete and utter rubbish, reports Ben Widdicombe this morning. "There was never ever any hint of any date or romance between the two of them," says Burrell. "Such a suggestion is as far-fetched as a talking car called K.I.T.T."

Burrell explains that the young princes William and Harry were fans of "Baywatch," and that the Hoff sent them some autographed stuff from the show – including a picture of him in all his hairy-chested glory. When Diana saw the photo, says Burrell, "I remember the princess laughing hysterically at the photo and turning her nose up."

Kate Beckinsale has just about had it with Hollywood superficiality – and she might end up back on a street corner selling left-wing literature to prove her displeasure. She tells London's Sunday Express magazine, "There is a point where if you have one more person saying, 'Wow I love your belt,' you start to go, 'I'm going to have to start selling 'Living Marxism' on the corner again.'"

Beckinsale, who studied French and Russian literature at Oxford, also says that she wants to write a novel – but not using her own name. "I wouldn't want to be a celebrity author," sniffs Kate. "That sounds highly vulgar to me. I wouldn't want anyone buying it because I've been in a couple of silly movies."

Peet Gets Married, Passes Around Her Ring

"Studio 60" star Amanda Peet got married yesterday to screenwriter David Benioff in New York, and evidently she loved her and her new husband's rings so much she wanted all her guests to see them. "They passed the rings around so every single person could touch them," says a friend of Peet's to Us Weekly, "which was unusual, but nice."

The pair got hitched at Friends Seminary, the Manhattan prep school that Peet attended, and the black-tie soiree following took place at the Chelsea Art Museum. The pair's pal Mark Ruffalo tells Us, "They were both glowing."

Jessica Simpson's got a new assistant, Adrienne Sands, who went to the University of Wisconsin. But according to Page Six, the young Badger has been squawking around somewhat indiscreetly that she's not too happy. "Adrienne has been telling everyone she's too smart for this job and doesn't like it," says an "acquaintaince." ... Mischa Barton really admires Cate Blanchett, even though, as she tells a Hong Kong magazine, she doesn't aspire to have her career – nor anyone else's. Plus, she's fond, as we've all seen recently, of a kind of hippie chic that's all the rage currently. "What suits me is a little more rough around the edges," explains the former "O.C." star.