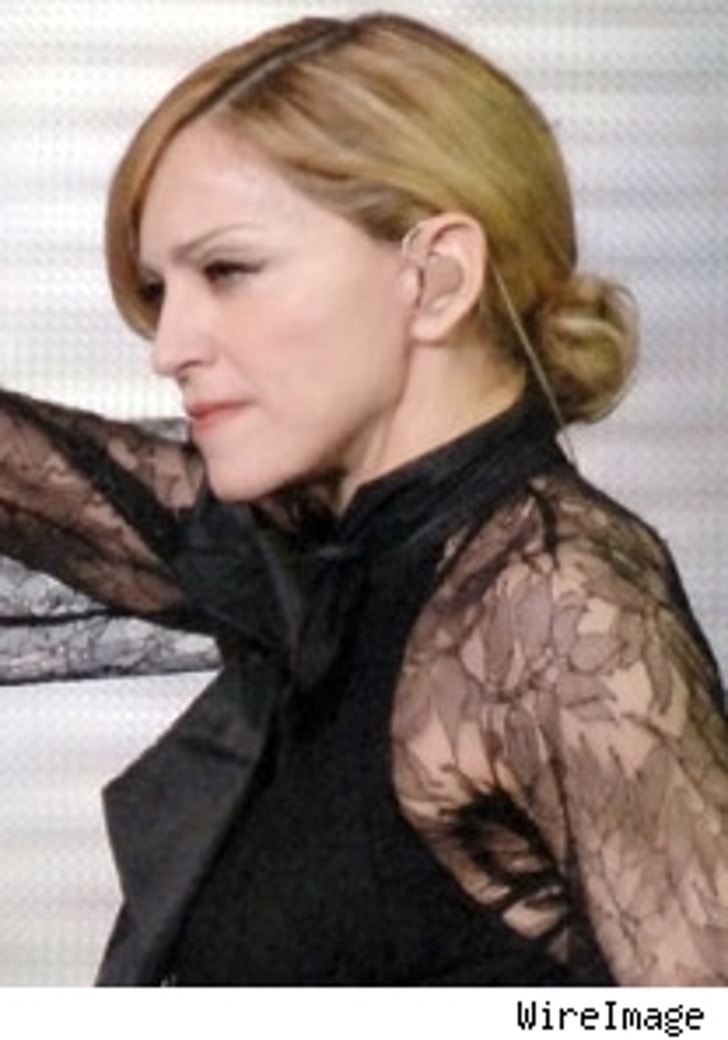 It looks like Madonna won't be crucified after all. After months of maintaining that she wasn't going to budge on the issue, Madonna yesterday had her controversial crucifixion scene cut by NBC (under pressure from its advertisers) from her concert special set to air next month.

During the song "Live to Tell," Madonna is shown on a mirrored cross wearing a crown of thorns, a visual statement meant, she's maintained, to illustrate a theme of confession. But religious leaders from Missoula to Moscow have objected to the scene, and several church-related groups had threatened to organize a boycott of one of the advertisers on the show. And NBC, with its ratings low and layoffs just announced, decided it didn't need to deal with even more trouble, so it has "revised" the plan for the Nov. 22 broadcast.

Jessica Too Good for Nick -- Just Ask Her

Seems Jessica Simpson has a new "Operation Smile." She explains the demise of her marriage by talking innocently (NOT) about how she does God's work and then trashing ex-husband Nick Lachey. In Jane magazine (via Page Six), Simpson says that on their third wedding anniversary, she went to go save the children while Nick just "stayed at home." And in that one fateful moment, the scales fell from Simpson's formerly deluded eyes. "Everything became so clear," says Jess (cue the violins). "I was in hospitals with all these sick kids ... I just knew I needed to find something more in my life, on my own." Not long after her humanitarian mission, on which she was accompanied by her dad and hair stylist, she and Nick split. No word on why Lachey didn't go with her.

Brody and Lauren Conrad Heat Up

Brody Jenner sure does like some "Laguna Beach" lovin'. The ex-boyfriend of Kristin Cavallari and (for a minute) of Nicole Richie is now hooking up with Cavallari's former nemesis Lauren Conrad, whose life is now documented on MTV's "The Hills." "I don't know what you consider dating, but we're seeing each other, we're having a great time with it," says Jenner to People. "There's nothing bad to say about her." (Way to be enthusiastic about your squeeze, dude!) Conrad, for her part, was more coy: "He's a nice guy."

Elisabeth's On The Clock

Almost very day on "The View," there tends to be at least one moment when you think Elisabeth Hasselbeck is going to completely lose it and just storm off the set – and now a website is trying to figure out when she's going to do that for the very last time. Allyourtv.com is running a contest, says Page Six, to see when Hasselbeck will be bolting from the show, as has been rumored in some places. "While [Rosie] O'Donnell might be doing wonders for the ratings," says Rick Ellis of Allyourtv.com, "she's not doing much for young Hasselbeck's blood pressure." One of the prizes given for guessing the right day of Elisabeth's departure is the football trading card of Seattle Seahawks quarterback Matt Hasselbeck – except that her husband is actually Tim Hasselbeck of the New York Giants. There's been no public suggestion from the network or Hasselbeck that she intends to quit.

Amidst all the other woes it faces, NBC has decided to take its critically-lauded but low-rated drama "Studio 60 on the Sunset Strip" off of next Monday night's schedule and will let similarly critically-lauded but low-rated drama "Friday Night Lights" have its timeslot. A repeat of "Studio 60" had been scheduled already, but the move, as the New York Post points out, isn't exactly a vote of confidence ... Beloved '80s TV show "Fraggle Rock" is finally in development as a feature film, the Jim Henson Company confirmed yesterday. Gobo, Wembley, Mokey, Bobber, and Red will venture outside of Fraggle Rock to interact with strange beings in outer space ... Janet Jackson's boyfriend Jermaine Dupri, according to Rush & Molloy, has in fact left his executive job at Virgin Records; Dupri has been critical of the label's handling of Janet's records.