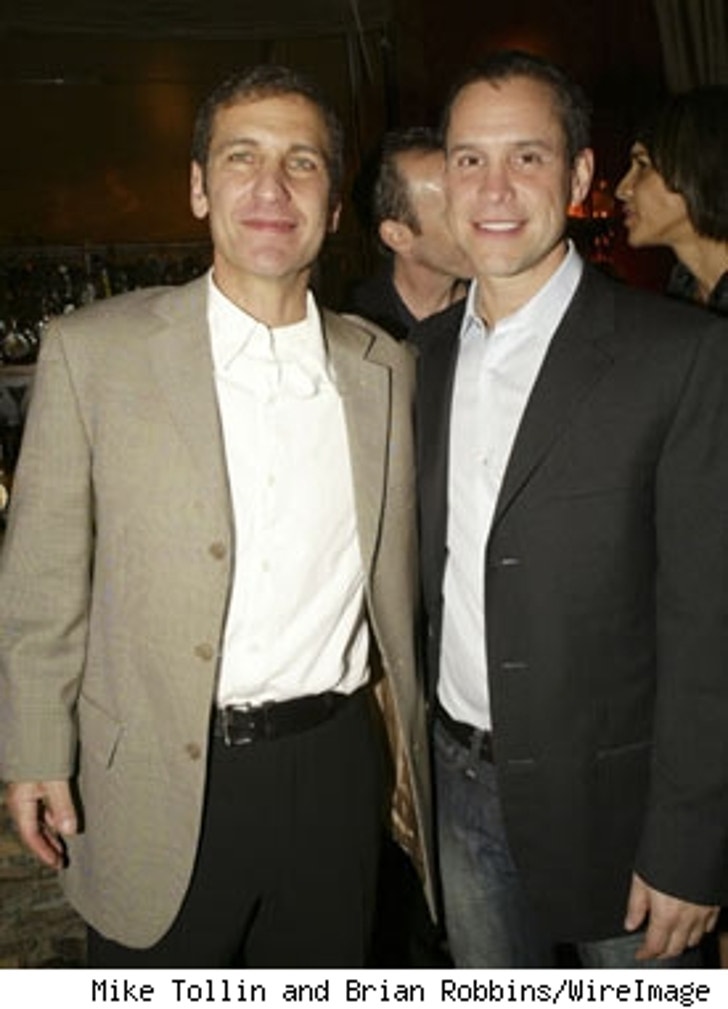 BREAKING NEWS: In an exclusive interview with City of Industry, producer-directors Mike Tollin and Brian Robbins tell TMZ that after 15 years together, they are "reconfiguring" their production company "to more easily pursue invidual projects."

The love affair, they stress, is not up-ending their company, as the Hollywood rumor mill has been buzzing for weeks. That said, Robbins is setting up a new first-look production shingle at DreamWorks -- without Tollin.

If any producing partnership is akin to a marriage, it's fair to say even though they are sleeping in separate bedrooms, but they're staying together for the sake of the children: The "kids" they've produced include the CW hits "Smallville," and "One Tree Hill." Tollin Robbins are also producers of comedies like the Eddie Murphy fat-suiter "Norbit" and the ensemble comedy "Wild Hogs," the latter of which is spawning a sequel at Disney as it edges closer to $80 million in box office receipts.

Both have also directed films: Tollin's been at the helm of movies like "Radio" and "Summer Catch," Robbins, the aforementioned "Norbit," and a remake of "The Shaggy Dog."

Explains Tollin: "The worst part of being succesful is that you become more a manager and less a filmmaker," adding that his more indie sensibility has him getting behind the camera again as a director with "Counting Down," a comedic family drama that's being put together even as you read this post, at GreeneStreet Films. Simultaneously, Robbins is next directing "Starship Dave," an Eddie Murphy comedy about tiny aliens that are struggling to save their planet from destruction. That the duo would have been spending time apart anyway made Robbins decision to answer DreamWorks' flirtations all the more rational.

Says Robbins, "Different tastes have made the company successful." Joining Robbins at DreamWorks is Sharla Sumpter Bridgett, previously an exec at Tollin-Robbins.

Indeed, the duo are those unusual producers who work in both TV and film, and who are as comfortable behind the camera as in a pitch meeting, and they plan to continue to work together on upcoming TV projects, like the forthcoming ESPN miniseries "The Bronx is Burning."