While Hayden Panettiere and the hilarious cast of "The Office" brought a little A-listness to an MTV Movie Awards Luxury Lounge yesterday, the rest of the guest list read like the casting call for the next episode of "Surreal Life Does Supermarket Sweep." 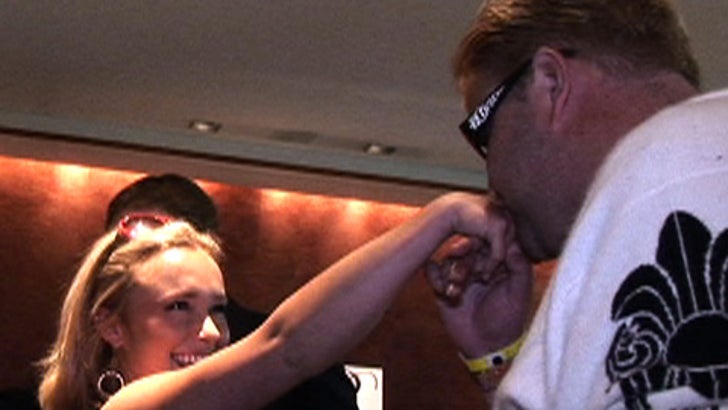 Poor little Hayden was forced to surrender her hand to Jason "Gummi Bear" Davis for a kiss, as buddy David Weintraub looked on -- with David later boasting about his big feet. Elsewhere in the suite, a busty Traci Bingham waxed poetic on Lindsay and Paris, while Bree's gay son from "Desperate Housewives," Shawn Pyfrom, showed off his Dance Dance Revolution skills.

"Road Rules" star Derrick was caught getting a manicure, "Real World: New York's" The Miz was happy to be spotted sober (for once) by TMZ, and "RW: Key West's" Johnny Bananas talked s**t about Paris until he heard she may be stopping by the suite for a visit.

"Idol" wannabeen Justin Guarini, Borat sidekick Ken Davitian and Shannon Elizabeth were also in attendance, and Shar Jackson had a tip to keep Lindsay out of trouble -- "Get an Xbox!"

All this and more in today's "Gummi Meets the Cheerleader" edition of Swag Catcher.