Nicole Richie went shopping for diaper bags, but her dad isn't ready to be a grandfather. 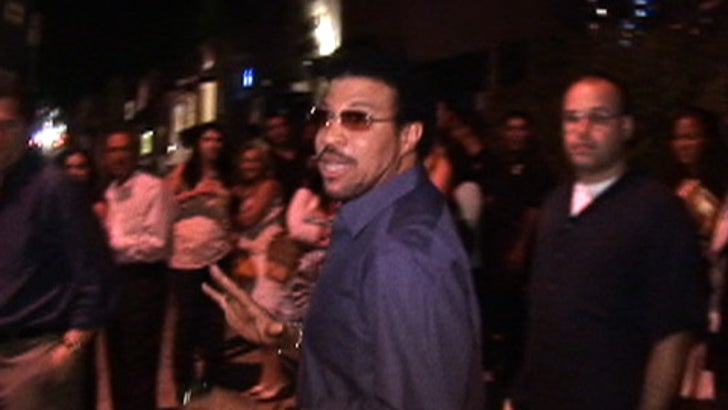 TMZ spotted Lionel jetting from Koi last night, where the "Dancing on the Ceiling" singer said, "Don't scare me!" after a photog asked if he'll be soon be called Gramps.

Courteney Cox and David Arquette were spotted going to an OmniPeace event at Kitson last night, looking happier to see the cameras than the last time they were spotted together. Also at Kitson: David Spade, who was reminded of his stellar work in "PCU" with Jeremy Piven, and Kim Kardashian, who rolled up in her pinkly customized Range Rover.

"The Hills" babes Lauren Conrad and Whitney Port were out at Teddy's last night, where Lauren gave a loving shout-out to engaged co-stars/enemies Heidi & Spencer. Whitney and her buddies were excited to share their run-in with Kate Hudson earlier in the evening, telling TMZ cameras they saw her "drunk" at the Roosevelt.

Also out were "Heroes" stars Hayden Panettiere and Masi Oka, who were playing a little Harry Potter on the Nintendo Wii, Shar Jackson, putting her breastesses on display in a hot black dress, a muscular Cheri Oteri, a bob-happy Rihanna and jean designers extraordinaire, Chip & Pepper.

All this and more in today's pinkly customized Star Catcher.