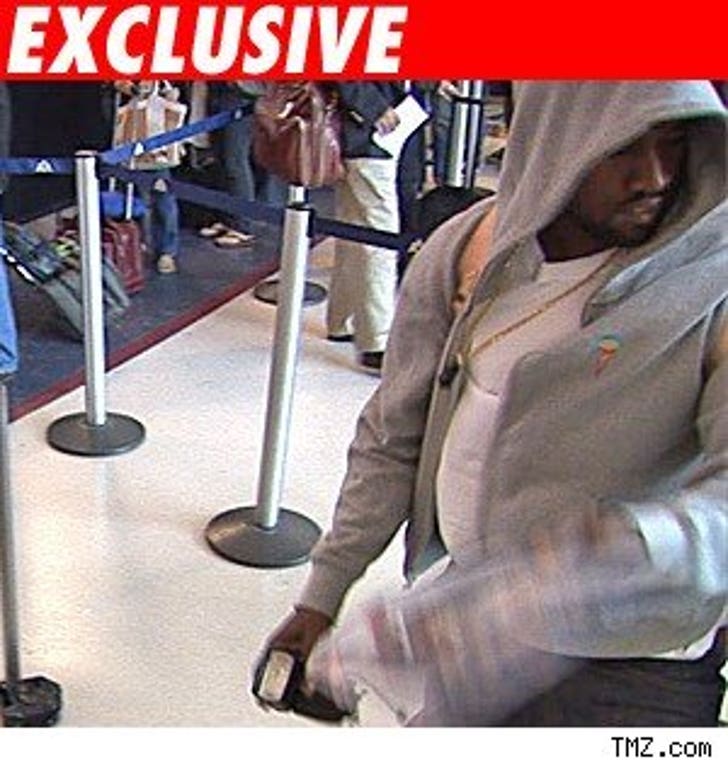 Erik, our cameraman, is on his way back to our offices now, after being interviewed by LAX Police. Here's what happened that led to Kanye West's vandalism arrest at LAX.

Erik says he was at Terminal 4 (American Airlines) when he noticed a still photog taking several pictures of Kanye West. Erik says West rushed the photog and grabbed his camera. A struggle ensued and the still guy was screaming, "Police, help!" Erik says Kanye then took the still camera and threw it on the ground, breaking it into pieces. (Click here to see the video)

Erik then went over to Kanye, his camera rolling, when Kanye's bodyguard walked up to him, realized Erik was taping, and said, "Give me the camera, give me the camera." Erik responded that he had a press pass and had a right to shoot. The assistant then grabbed the camera, ripped off the mic and viewfinder and smashed it to the ground.

Erik says Kanye then tried to leave to board his plane, but cops stopped him before he got to security. The cops then interviewed Erik, the still photog, Kanye and his assistant.

This is where it gets crazy. The cops asked Erik if he videotaped the incident and Erik said he had. That's when Kanye lunged toward him and said, "Give me the fu***ng videotape." Cops had to restrain Kanye as he tried coming at Erik.

The videotape is on its way back to our offices. We will post shortly.