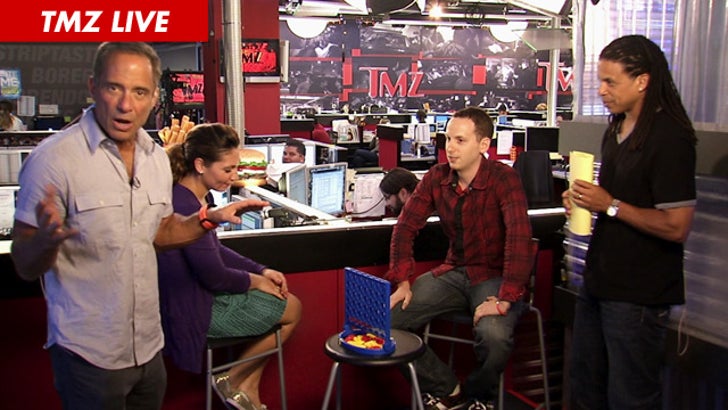 Jenny McCarthy put Jim Carrey on blast for not staying in touch with her 10-year-old son -- but there's a lot more to this story. We have new details from insiders, and we gotta say ... it's looking like Jim got the shaft.
Plus, our super-heated debate over ... John Mayer and Taylor Swift?? John's pissed 'cause he thinks her "Dear John" song was a double-cross, and for some strange reason ... everyone's fired up about it.

And "Glee" star Josh Sussman shaved down his fabled jewfro -- did he lose his Connect 4 powers too? The new low-pro Josh returns to TMZ for a rematch against Shevonne!

(0:30) Turns out Kris Humphries is actually knocking boots with that chick he was hanging out with at the beach -- and it looks like she's got a little obsession with his ex's family. You know, the Kardashians.
(5:05) Jenny McCarthy slams Jim Carrey for not keeping in touch with her autistic son after they broke up ... Harvey and Charles have a big problem with this.
(10:00) Harvey RIPS Taylor Swift for writing a break-up song about John Mayer ... and Charles RIPS John for bitching about it.
(16:00) A Miss USA contestant claims the pageant was fixed -- and now Donald Trump is going after her .... guns blazing.
(18:32) A 14-year-old radio host launches a full-scale attack on gays -- you have to hear him explain why President Obama is supposedly causing people to be gay ... and you have to hear Harvey blast the kid for having bad grammar.
(24:15) Miley Cyrus gets engaged at 19 -- Harvey and Charles think it's a recipe for disaster.
(27:45) An "America's Got Talent" contestant claims he was injured as a U.S. soldier in Afghanistan -- and it caused him to stutter ... except when he sings. Sounds like a great story ... if the guy's not full of crap ... and he just might be.
(32:10) Melissa Etheridge's ex is getting HALF the royalties of a bunch of songs M.E. wrote ... but not the one everyone knows.
(34:30) It's the rematch of the century -- "Glee" star Josh Sussman returns to retain his "Connect 4" crown against Shevonne ... but this time he doesn't have his trademark fro. Will his drastic haircut kill his mojo? Only one way to find out...
(41:15) We take your calls!