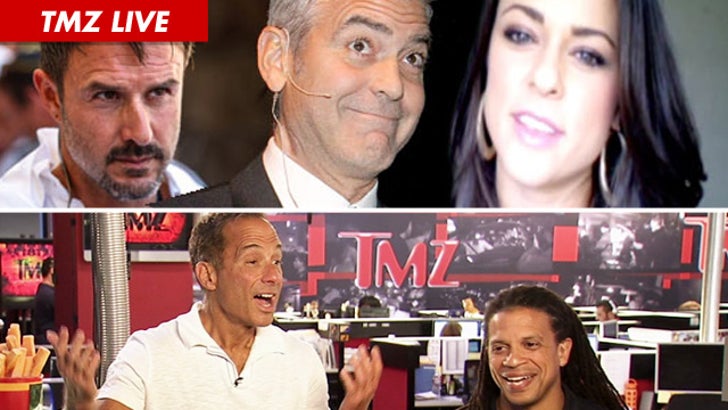 TMZ Live
David Arquette finally pulled the trigger on his divorce from Courteney Cox -- but not until trying to work things out for 3 months. So why now? The answer might have something to do with her "Friends" millions.
Plus, the big George Clooney debate -- would a 30-year-old woman have sex with the Cloons if he was flat broke? We go live to the TMZ Tour to get answers.
And, the ex-Miss Pennsylvania claimed Miss South Carolina was not "beautiful" enough to make Miss USA's top 16. Umm ... we got Miss SC on Skype, and can now confirm -- ex-Miss Penn must be totally blind!

(0:00) We broke the story ... David Arquette files for divorce from his estranged wife Courtney Cox -- so how did he beat her to the punch? We can think of a few million reasons.
(5:30) Kris Humphries ex-girlfriend is taking his extortion allegations laying down -- she just hired powerhouse attorney Joe Tacopina to fight back ... and we have him on the phone.
(10:32) Another twist in the Lindsay Lohan crash -- booze was found at the scene ... but she won't be pinned for it. The fact that she lied to cops about driving is a different story.
(15:35) 50 Cent and Oprah squash their beef -- but not before she confront him about naming his dog after her.
(19:15) George Clooney takes Stacy Keibler to his mansion in Italy! Which somehow sparked this debate ... would a 30 year old woman have sex with a 50-ish Clooney if he was just a mechanic?
(25:20) Ex-Miss Pennsylvania rips into Miss South Carolina for not being pretty enough to make the top 16 in the Miss USA pageant ... guess who get talk to via Skype? Miss SC ... and boy was Ex-Miss Penn wrong about her looks.
(28:20) Kim Kardashian may have shot herself in the foot over her QuickTrim Scandal -- because we found video of her swearing that she not only used it ... because she made sure it was legit first. Evan couldn't be happier.
(32:01) Kobe Bryant and his wife call off the divorce ... good thing he gave her three houses.
(35:01) The latest in the Jerry Sandusky trial ... will make you sick to your stomach.
(40:25) We take your calls!