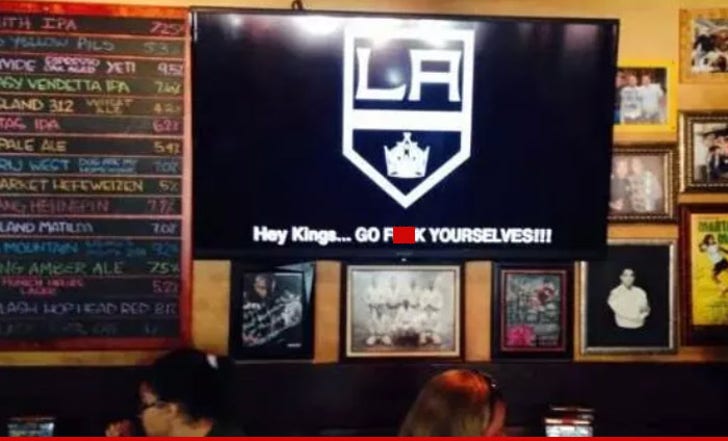 A Chicago Blackhawks fan concocted a diabolical scheme to stick it to L.A. after the Kings beat them in Game 7 last week -- and his nefarious plot worked ... duping an L.A. restaurant into running a video on its TV screens that contained the message, "Hey Kings, Go F**k Yourselves."

The photo of the TV monitor at Silvio's Brazilian BBQ in Hermosa Beach went viral ... showing the King's logo with the F-bomb message spelled out across the bottom of the screen.

Now, TMZ Sports has learned the owner of the place -- which happens to be popular with Blackhawks fans -- is offering an explanation ... pointing the finger at a Chicago supporter.

"Unfortunately, we had a negative incident here at Silvio's after Game 7 of the Blackhawks/Kings game that has offended pretty much everyone in our community," managing partner Doug Howarth said in message to bar patrons.

"A regular of the restaurant, and Blackhawks fan, created a 20 minute highlight video to show after the game. It showed clips from the past season, and general Chicago stuff. At the end of the video, there was a 10-15 second screen shot of the LA Kings banner with the term: "Hey Kings, Go F*** Yourselves". This screen shot is the image that has gone viral."

Howarth added, "I sincerely apologize that something this stupid, un-sportsman like, and vulgar appeared on the tv's at my restaurant. We were not aware that this message was attached to the end of the video."

Howarth insists he's a Kings fan -- and closed the letter by adding, "GKG."

Still, pretty damn funny if you ask us.