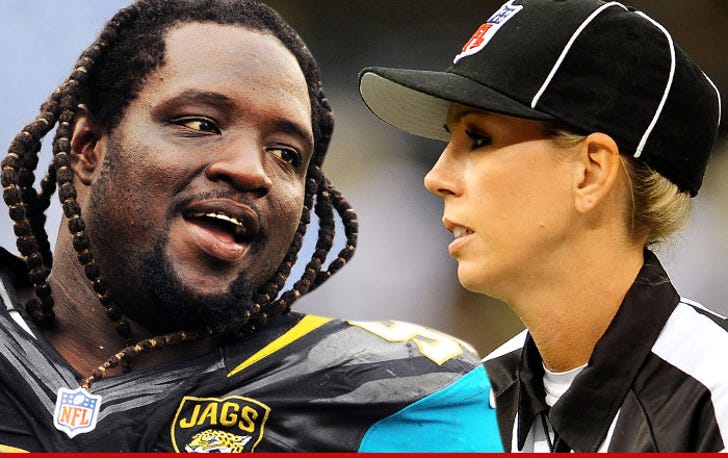 Jacksonville Jaguars lineman Sen'Derrick Marks strongly believes ... the NFL's move to hire the league's 1st female ref is more about publicity than talent ... and compares her to Michael Sam.

According to multiple reports, the NFL has hired Sarah Thomas -- a pioneer in women's officiating -- to be the first female line judge in league history.

The move has drawn widespread praise from most ... but Marks says Thomas' hiring is less about progress and more about a league desperate for positive stories.

"For women, it's great," Marks says ... "Ain't nothing wrong with it, especially as long as she knows what she's doing."

However, Marks adds ... "It's just like the Michael Sam situation -- if he wasn't gay, he would've gone undrafted. Instead the league drafts him because I think they are trying to monopolize on every aspect of the world ... the same thing with hiring a female ref."

"For the league it's great publicity. The NFL is all about monopolizing every opportunity."

No matter what the reason, it seems Thomas has finally cracked the boy's club -- and Marks says now that she's in, he's rooting for her to succeed.

"I hope it works out for her."