A rogue vigilante started firing arrows at protesters in Utah this weekend -- and it cost him (and his car) dearly almost instantly.

The scene was filmed Saturday in Salt Lake City, where protests and riots are in full swing right now ... as they are in many other parts of the country. Apparently, a group of protesters had blocked off the road somewhere there in town, and one man had had enough.

A civilian brought a hunting bow to the #slcprotest and began shooting it at protesters. pic.twitter.com/UYZFtISb9I

He emerged from his vehicle with a hunting bow he had on him and supposedly starting brandishing it toward the crowd ... seemingly threatening to shoot arrows at people. One woman had a brief convo with the guy, asking if he's serious ... and if he considers himself American. He says he does, and then appears to start actually firing at some folks.

It looks like one person might've been hit as they fell to the ground, and when the man turned and tried shooting at some more people ... he got bum-rushed with a BUNCH of bodies, who proceeded to beat his ass and take him to the ground.

The SLC police retreated and allowed rioters to light the man’s car on fire. pic.twitter.com/aXhBhXQODO

That's not where the story ends though for this sap -- according to the woman who shot this, SLC PD retreated and allowed protesters to light the guy's car on fire -- which was captured on video as well. According to her, the guy was taken into custody in the end.

That's just the latest and craziest thing happening right now around these United States -- just as harrowing of a scene was unfolding in NYC too ... where it looks like a police car drove into a crowd of protesters who were behind a barricade.

Doesn't seem things ended too well for that vehicle either ... as people immediately started piling on and attempted to destroy the thing. 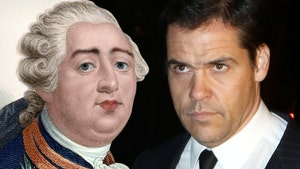