A Milwaukee Councilman is slamming Republicans for what he believes is a trick to lure black voters in Wisconsin to cast their ballots for Kanye West and steal votes from Joe Biden ... but he predicts it will backfire.

Cavalier Johnson has been the Alderman for Milwaukee's 2nd district, and he's sounding the alarm for what he calls a "shameful, pitiful" ploy attempting to take advantage of a man struggling with mental illness.

There have been reports Republican operatives are behind Kanye's efforts to get on the Wisconsin ballot. As you know, Wisconsin was a swing state in 2016 and if it's close again, a spoiler like Kanye could make all the difference.

Johnson says ... "It’s hard to imagine how this president and the GOP could top the racism, xenophobia, white supremacy, COVID failures, apologies for Russia, pocketing millions in taxpayer dollars with visits to Trump-branded golf courses, etc.," but he accuses them of doing exactly that in Wisconsin.

Despite his outrage and disgust, the councilman doesn't think the plan will work, saying when the word gets out it will further unite the black community in support of Biden.

As we reported ... Kanye has enlisted the help of a third-party organization in order to acquire enough signatures needed to get him on the presidential ballot, especially in major swing states like Wisconsin and Ohio.

Trump denied talking to any Republican operatives to get Kanye on the ballot, although he did say he liked him a lot. 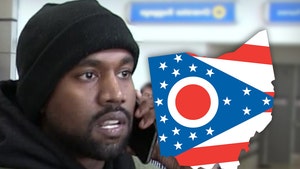 Kanye Makes Play to Get on Presidential Ballot in Ohio