The first man to respond to the Tiger Woods crash scene was a local man who told law enforcement the golfer was unconscious in the driver's seat ... this according to new court documents obtained by TMZ Sports.

L.A. County Sheriff's Deputy Johann Schloegl submitted an affidavit which described an interview with a man who lives in the area where Tiger crashed his SUV on Feb. 23.

The man told law enforcement ... he heard the crash near the Rolling Hills Estates and decided to walk to the accident scene to check it out, where he saw Woods.

According to the affidavit, the witness tried talking with Tiger but the golfer was unresponsive.

L.A. County Sheriff's Deputy Carlos Gonzalez arrived at the scene shortly after -- and has publicly stated Woods was conscious and talking when he got there.

Deputy Gonzalez has also said Tiger did not appear to be under the influence of alcohol or any other substance.

As we previously reported, officials are now pulling data from the "black box" in Tiger's 2021 GV80 vehicle which could reveal details about Tiger's speed and driving pattern in the moments before the crash.

In the affidavit, Deputy Schloegl spells out, "I believe the data will explain how/why the collision occurred."

L.A. County Sheriff Alex Villanueva has been adamant Tiger will not be charged with a crime ... describing the situation as a pure accident, nothing more. 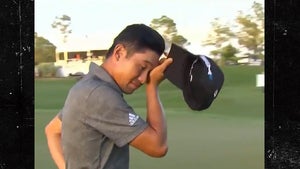