Miss Colombia may have lost her crown, but companies pitching burgers and beers want to re-crown her and make her super famous and wealthy.

Sources connected with the scorned Miss Universe contestant tell TMZ, a high-powered manager -- who reps Sofia Vergara -- is working on her behalf and is in talks with Burger King for a fantastic commercial. Miss Colombia would star in a kids' meal spot where everyone keeps their crown.

And we're told the manager -- Luis Balaguer -- is also talking to Corona about a commercial featuring Ariadna Gutierrez on the beach with a cold one. The hook -- "corona" is "crown" in Spanish.

And there's more ... we're told Ariadna's dream is to become a Victoria's Secret angel, and our sources say Balaguer was in touch with the company on Tuesday.

BTW ... we're told Ariadna was enraged at both the Miss Universe pageant and Steve Harvey after the screw-up and hasn't returned a single call to either. Fact is, it's the best thing that could have happened to her. 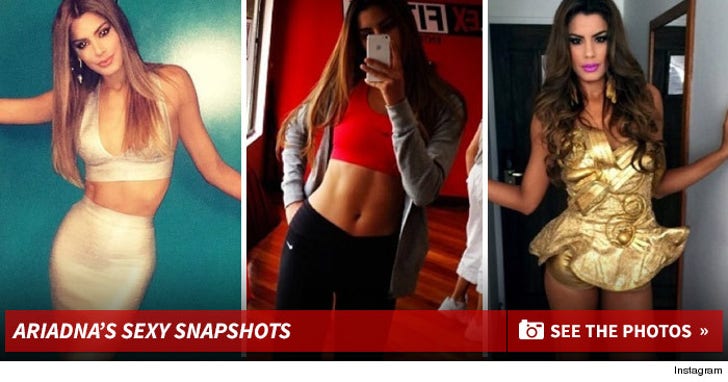 to Ariadna Gutierrez Tuesday offering up $1 million. He made his case with another famous pageant queen, writing, "The only name that most people remember is Vanessa Williams," adding the reason for her rise to fame was nude pics in Penthouse.

Hirsch goes on with his pitch ... "Celebrity sex tapes we have distributed have enhanced the careers of stars such as Kim Kardashian, Kendra Wilkinson, Pamela Anderson and many others."

And Hirsch is willing to give Ariadna wide berth, saying, "You will pick your partners, the type of sex you want to have and how many movies you ultimately appear in."

And Hirsch put a cherry on top by saying he would "commission the making of the first Vivid Girl Crown for you and we believe it will be grander than anything Miss Philippines will ever wear." 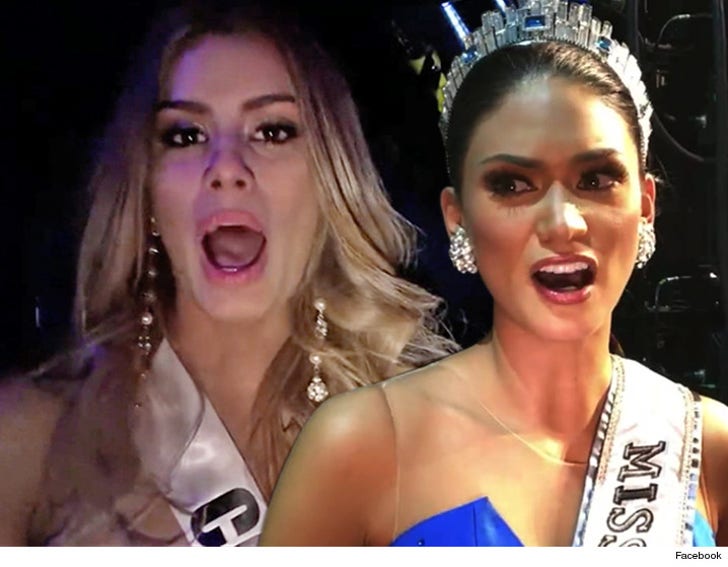 Miss Universe now has a raging war on its hands ... between Latina contestants and Miss Philippines.

The women were NOT blaming Steve Harvey, whom they said was gracious. They were squarely and tearfully blaming Miss Philippines for the embarrassment, although no one could coherently explain why the snafu was her fault.

Some of the Latina contestants were grousing backstage ... Miss Philippines did not deserve the crown. We're told most of them snubbed the winner, not congratulating her on the victory.

We're told there has been a fierce competition between Colombia and the Philippines in the pageant's history, and it certainly reared its head Sunday night.

Shanna Moakler, a former Miss USA and pageant honcho, told us on "TMZ Live" Monday the competition between Colombia and the Philippines is extremely fierce. 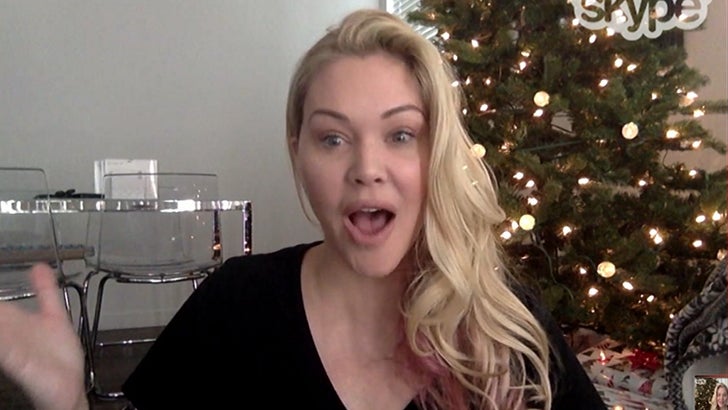 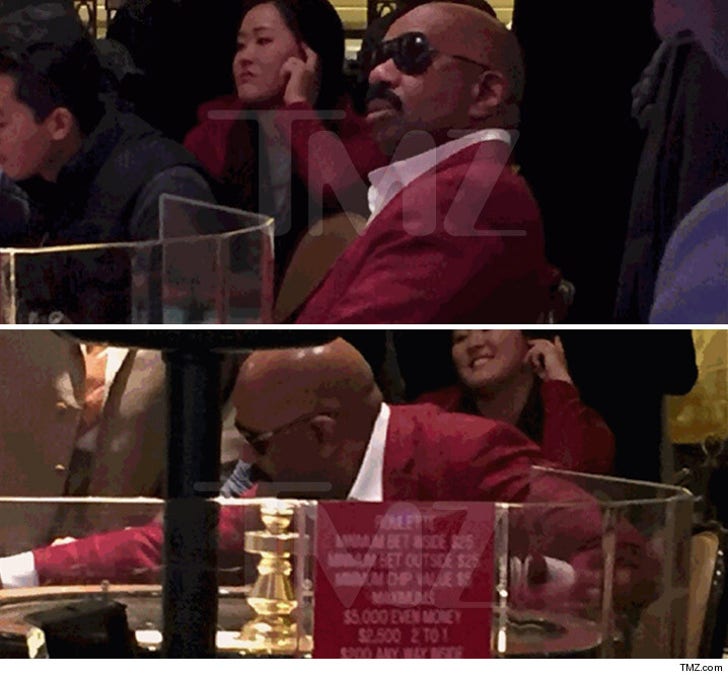 Steve Harvey hit the high-end roulette table in Vegas to kick off the Miss Universe weekend.

TMZ obtained these pics, taken Friday night at Caesars. It was the big boy's table ... $25 minimum.

Our sources say Harvey was back at the table Sunday just hours before the pageant began. We're told he had a few drinks and didn't win or lose big. 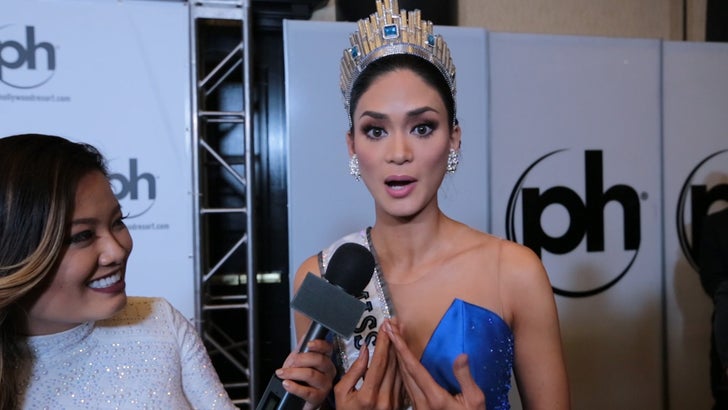 Miss Universe has an international incident on her hands that could drive a wedge between 2 countries ... at least that's the way Miss Philippines sees it.

She may be Miss Universe, but she has the best interests of the Philippines on the brain. 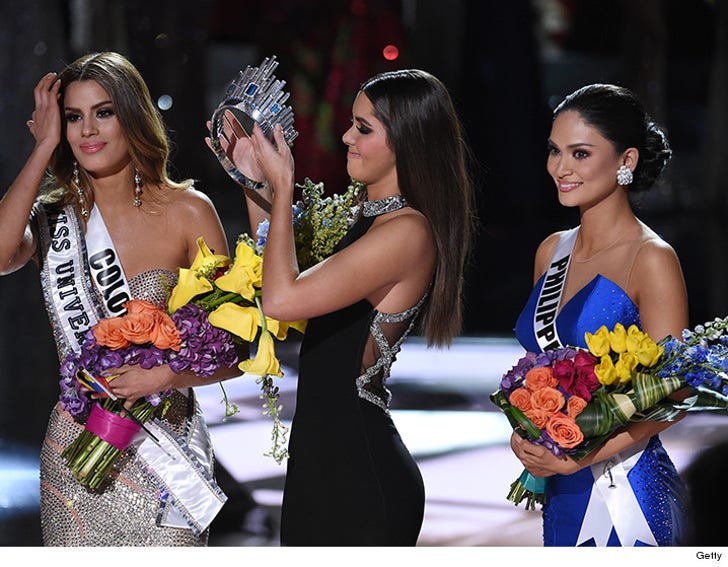 Miss Colombia will suffer not only disappontment as a result of Steve Harvey's blunder, but it is "something that can harm her" ... so says the country's Counsul General to New York.

Maria Isabel Nieto tells TMZ the snafu was extremely painful for Miss Colombia and could cause long-term issues. Nieto notes that physically taking the the crown from her will likely cause psychological trauma. 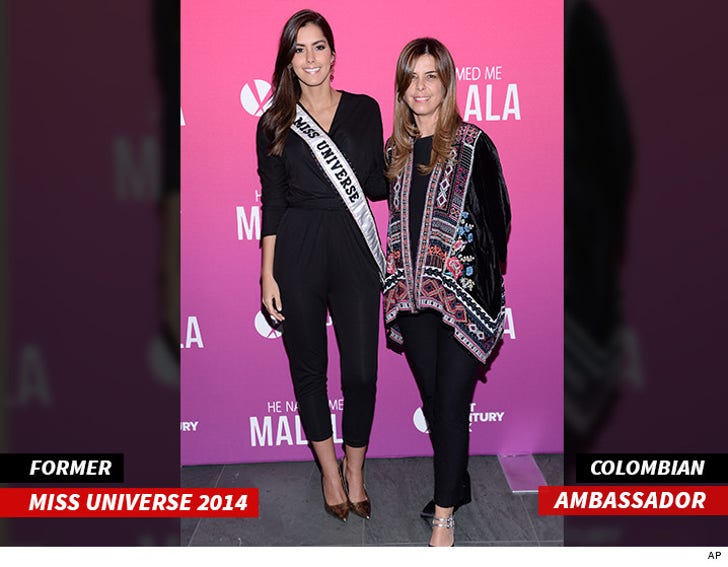 The Counsul General thinks Donald Trump is right on the money ... Miss Philippines and Miss Colombia should share the crown.

Failing that, Nieto thinks pageant officials should give Miss Colombia a more expanded role in the coming year. As she put it, all the first runner up does is wait, and that's not fair. 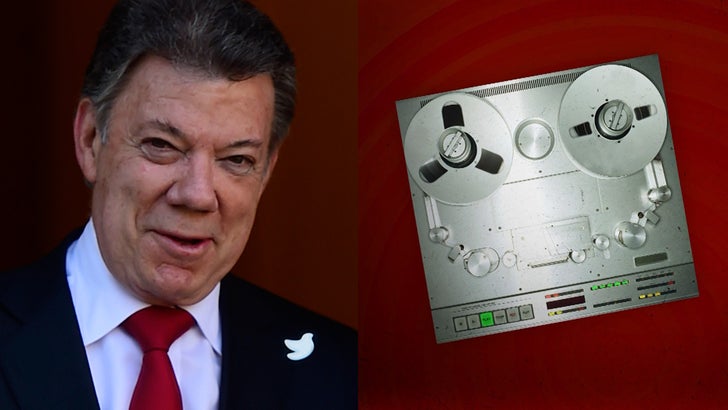 Steve Harvey You Might Want to Rethink Miss Universe Exclusive 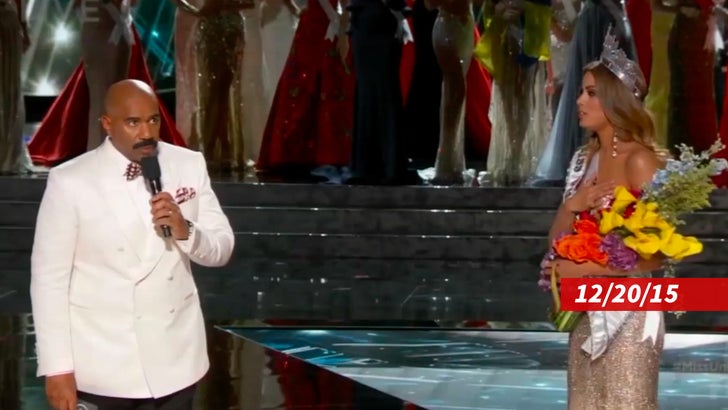 Steve Harvey might be the most hated man in Colombia EVER -- after accidentally declaring Miss Colombia the winner of Miss Universe ... and then taking it back!!!

It might be the greatest/saddest moment in the history of beauty pageants ... pay close attention to the look on Miss Colombia's face when Harvey announced his COLOSSAL mistake.

Harvey knows he screwed up -- and immediately began apologizing on Twitter.

"I'd like to apologize wholeheartedly to Miss Colombia & Miss Philippines for my huge mistake. I feel terrible."

"Secondly, I'd like to apologize to the viewers at that I disappointed as well. Again it was an honest mistake."

"I don't want to take away from this amazing night and pageant. As well as the wonderful contestants. They were all amazing." 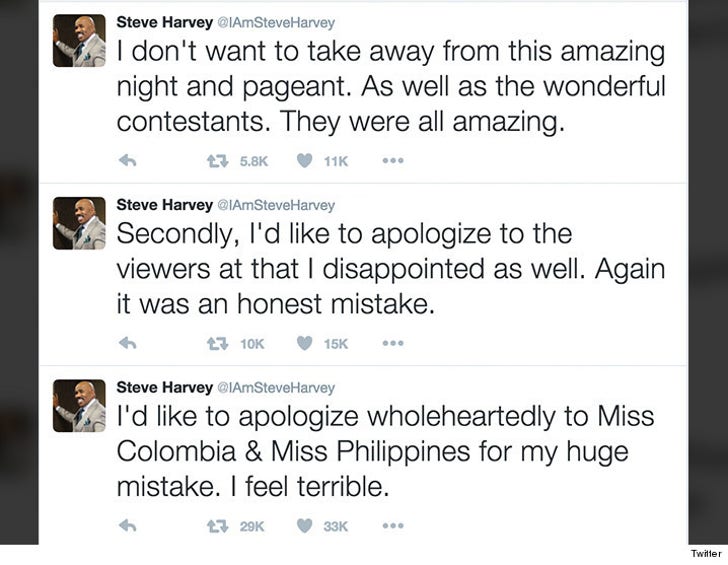 9:12 AM PT: Tyrese came to Harvey's defense on social media saying, "If I was hosting and seen this card...?? With this little ass writing?? I literally would of MADE the SAME MISTAKE!!!!! Steve Harvey, I stand with you." 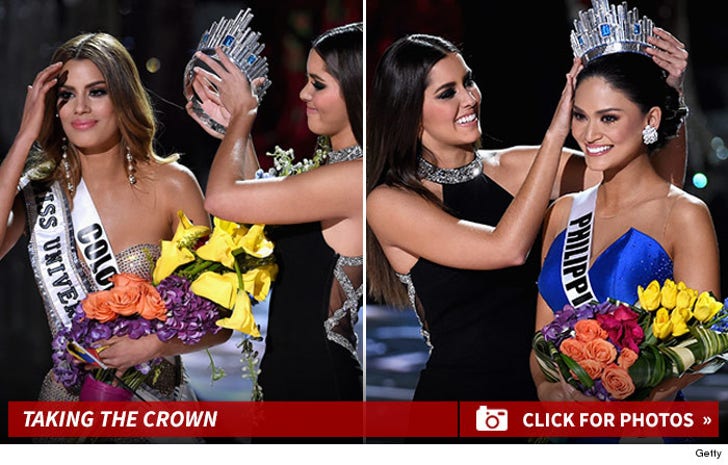 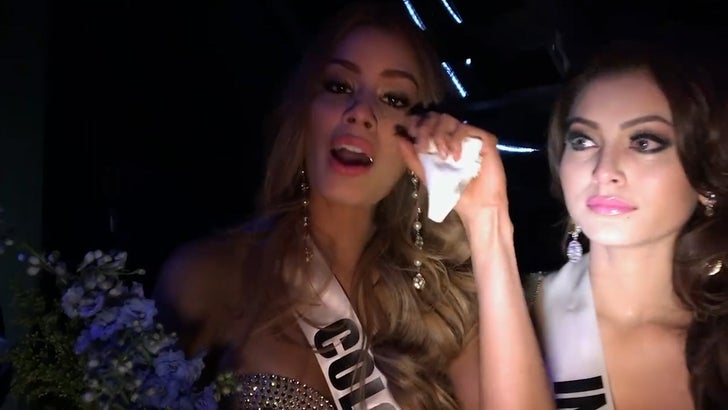 An emotional Miss Colombia was desperately trying to hold herself together backstage -- and did a pretty good job, too -- moments after she was uncrowned as Miss Universe ... telling her fans, "Everything happens for a reason."

Clutching a mascara drenched Kleenex, the beauty queen insisted she was still "happy" -- despite Steve Harvey incorrectly naming her the winner on live TV. Oops.

As for the real winner, Miss Philippines -- she was trying to wrap her head around the whole thing backstage ... saying the way it went down was "very 2015." 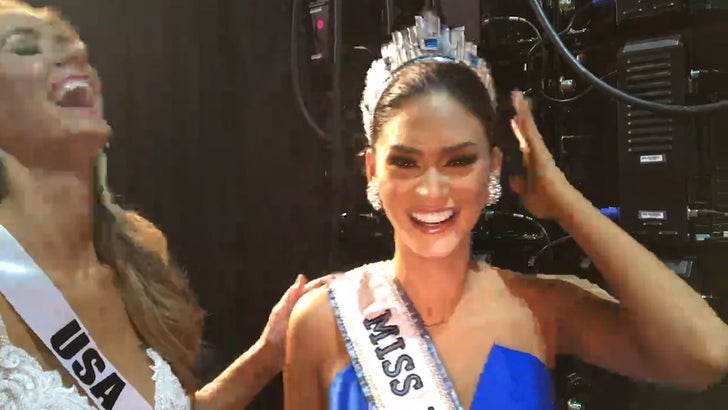 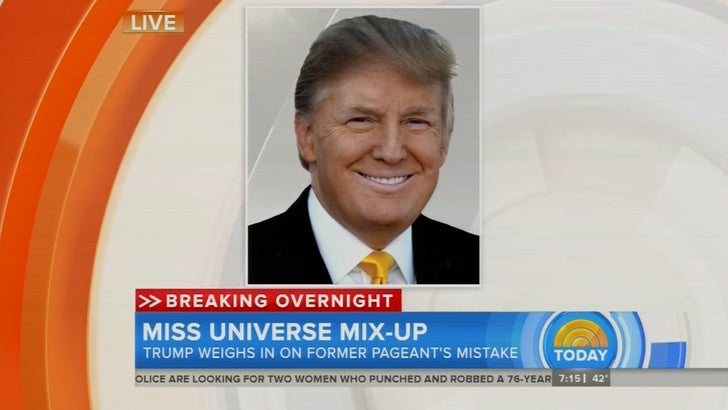 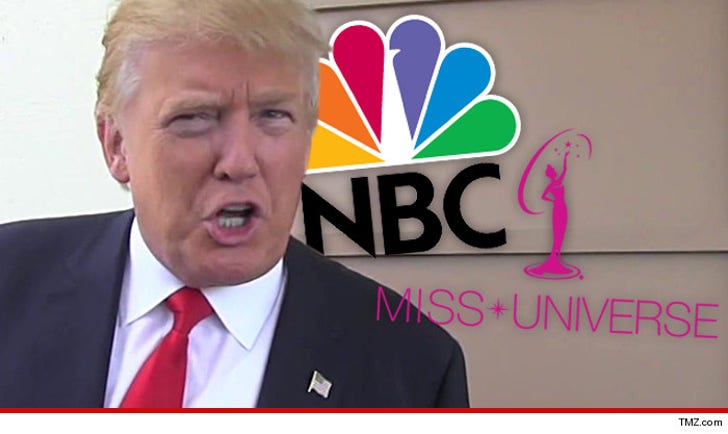 Donald Trump has settled his legal disputes with NBCUniversal and Univision by using his best resource ... money, money, money.

The Donald just announced he bought out NBC's half share of the Miss Universe Organization ... making him 100% owner.

Trump threatened NBC with a lawsuit after they yanked the Miss USA pageant off the air, following his remarks about Mexicans. Miss USA is a part of the Miss Universe Org. He sued Univision for $500 million, which also pulled the plug on the pageant. 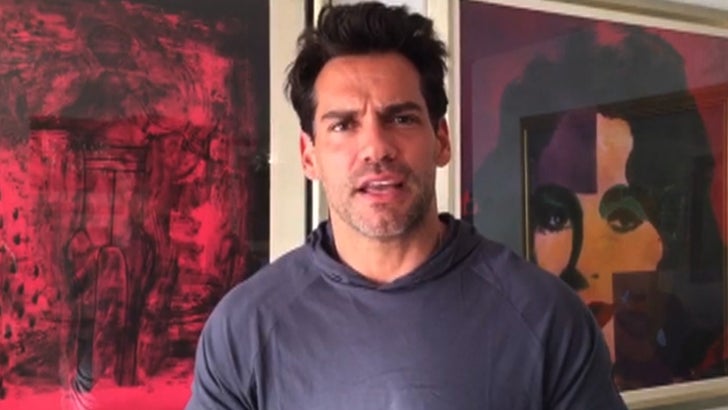 The Chilean actor who was slated to host the Miss USA pageant pulled out even before Univision pulled the plug, saying Donald Trump was "ignorant" and a "clown."

Cristian is not alone in his disdain. Roselyn Sanchez, his "Devious Maids" co-star, also pulled out and Univision officially pulled the plug Thursday morning.

For his part, Trump is sticking to his guns, saying "I love Mexico but not the unfair trade deals that the US so stupidly makes with them. Really bad for US jobs, only good for Mexico." 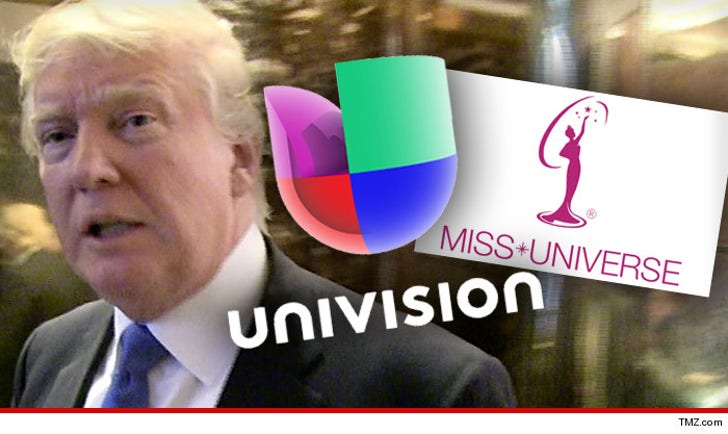 Donald Trump's smack in the middle of a full scale Mexican backlash -- his Miss Universe Organization just lost a major TV deal over his rant about Mexican immigrants being rapists and drug dealers.

Univision announced Thursday morning that it will not air the hugely popular Miss USA (owned by Miss Universe) competition ... which is coming up next month. Colombian singer J Balvin also pulled out in protest -- and as did co-hosts Roselyn Sanchez and Cristián de la Fuente.

Trump made the now infamous rant -- saying Mexico's not "sending their best" -- when he announced he was running for the Republican nomination for president.

Trump responded ... "Univision wants to back out of signed contract because I exposed the terrible trade deals that the U.S. makes with Mexico." He added that he loves Mexico, but not the bad deals.

Univision planned to air the first ever Spanish language simulcast of the pageant, but ... no dados.

The Miss Universe Organization is rife with sexual predators and deviants who prey on unsuspecting young women ... so says a pageant hopeful who claims a recruiter tried to dupe her into sex in a parking lot.

Ashleigh Blake filed a suit today against MUO over her run-in with a guy she claims promised to land her modeling jobs and magazine covers. In the lawsuit ... Blake says she met him in his car in a Starbucks parking lot ... where he explained the terms of an "oral" contract (her double entendre, not ours).

Specifically ... Blake claims he wanted oral sex in exchange for fast-tracking her to the top of the modeling world.

In the docs, Blake says she burst into tears and ran from the car. She says she went to the cops ... and was told she couldn't file criminal charges because the recruiter didn't force her to perform the sex act.

Blake's looking for at least $200K in damages.

We've reached out to the Miss Universe people ... but haven't heard back. 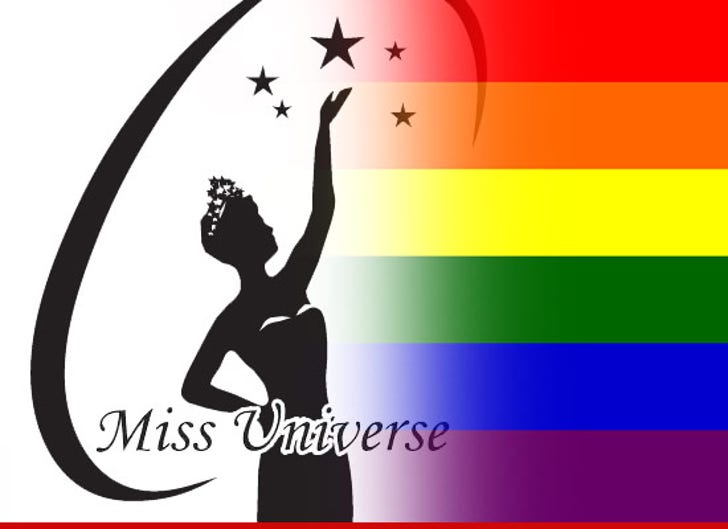 The Miss Universe Organization believes the show must go on in Moscow ... and it doesn't matter that the Russian government is gay-hostile.

A rep from the MUO tells us the new, anti-gay law violates the core values of the organization ... nevertheless, they want to stay put in Moscow. They say they're hoping to change Russian minds. Good luck with that.

Here's the rub. If some of the women competing are lesbians, they better keep it to themselves, because they could end up in the pokey if they play their hand publicly.

The decision to stay in Moscow isn't sitting well with everyone. A petition on Change.org is trying to pressure the MUO to move out of Moscow.

Here she is ... 2012's hottest woman in the KNOWN UNIVERSE -- at least according to the Miss Universe beauty pageant -- and unless there are some really hot aliens out there, we have to agree.

Representing the Third Rock from the Sun in a sexy mixed-pattern bikini, 21-year-old Olivia Culpo stripped down on a beach in Corona del Mar over the weekend. 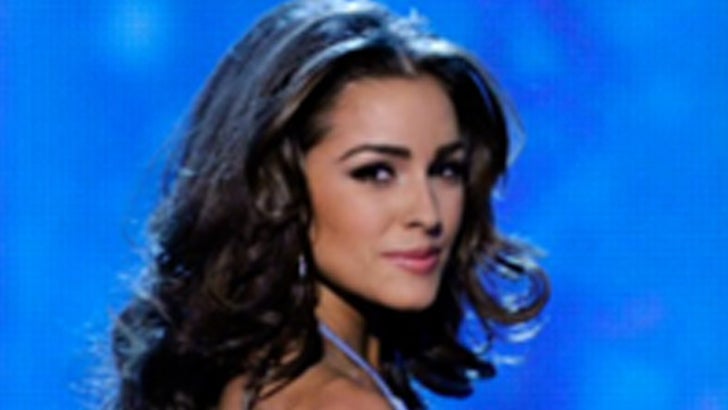 Miss Universe 2012 Olivia Culpo is a spoiled rotten Boston University drunkard who can't handle a little cold weather ... well, at least according to a bitter angry woman from a rival Boston school. 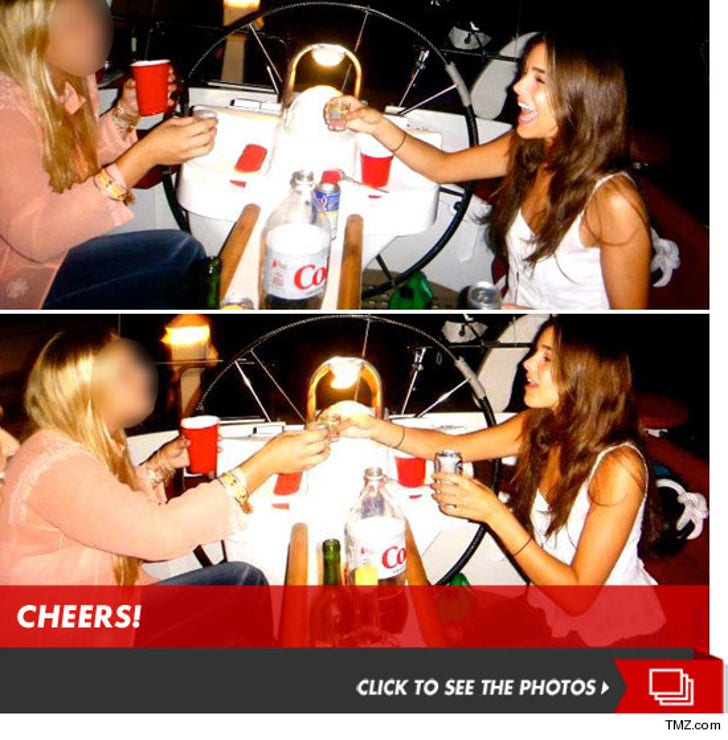 Miss Universe 2012 Olivia Culpo tells TMZ ... she did engage in underage drinking during her freshman year in college (like EVERY college student) ... but the 20-year-old insists her days of illegal boozing are long behind her.

Just days after Culpo emerged victorious at the Miss Universe competition last month, photos of the beauty queen taking shots of hard liquor surfaced on the web -- a problem since she's not exactly 21.

We reached out to Culpo -- who told us, "Like many college students I was curious and did experiment with alcohol in college."

She adds, "I would be lying if I told you I did not experience what many students do during their college years. I take responsibility for my actions."

Culpo says the pics were taken during her freshman year at Boston University -- but notes she hasn't had one drink since she won the title of Miss USA back in June.

It's too bad Culpo's parents weren't with her during the boozing sessions -- 'cause Massachusetts is one of the states where it's OK for someone under 21 to booze in a bar as long as that person is with a parent who consents.