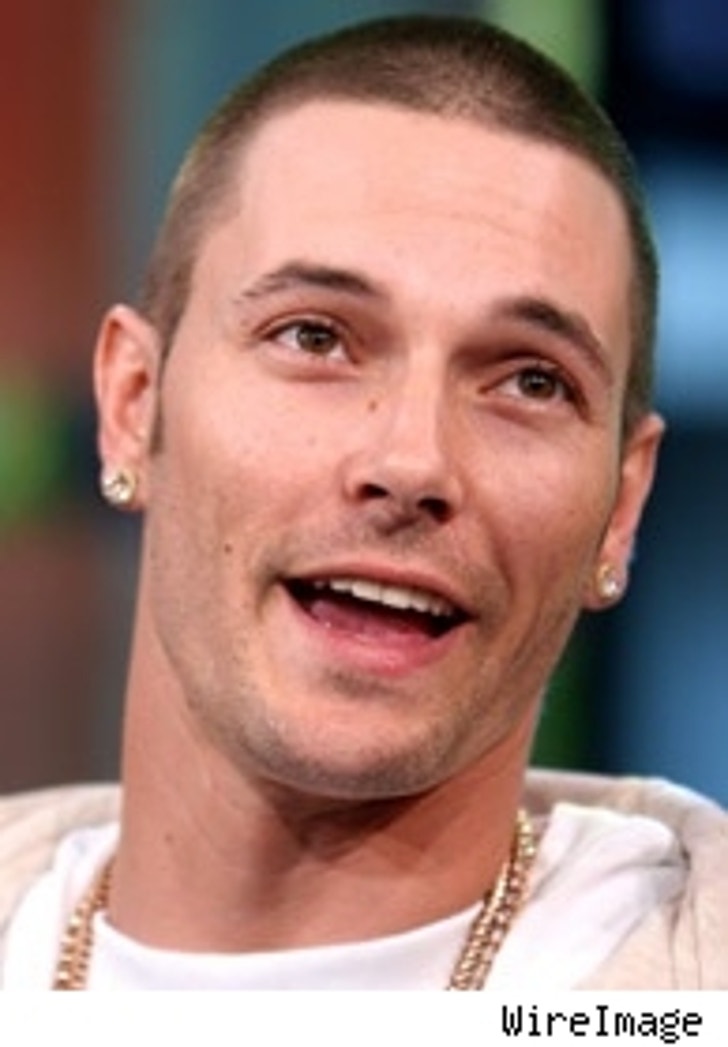 Don't tell us that K-Fed isn't a scrapper – now that's he about to enter the poorhouse, Kevin Federline will take just about whatever leftovers he can get, solid or liquid, even if he has to sneak them out in his coat.

The Fed-Ex and his boys were at a Manhattan burlesque spot for dinner right around the time the news of his divorce became public, and K-Fed already knew his credit cards had been snipped and phone shut off by Britney. He had his $1,200 meal comped by the restaurant, and then, according to Us Weekly (via Page Six), asked the staff to pack up the leftovers so he could munch on them in the clubs later.

What's more, according to one witness, he "started putting napkins in the tops of the tequila and vodka bottles" and tried sneaking them out under his coat.

The BFF-ization of Brooke Shields and the Cruise family continues. Not months after Tom Cruise publicly slammed Shields for her use of antidepressant drugs during post-partum depression, now, says Page Six, Shields will be a guest at the upcoming TomKat nuptials. Recently, of course, Shields and Katie Holmes were spotted yukking it up at a party, and Shields has forgiven Cruise, enough apparently to attend the wedding in Italy. Maybe she can bring Oprah, who won't be attending, one of the expensive towels Cruise plans to give out – even though O endured Cruise's couch-trampolining antics last year. Meanwhile, erstwhile BFFs Victoria and David Beckham are still, says People, scratching their pretty heads over a gift. And Posh is choosing between "six or seven" different outfits to wear to the big event. Finally, in case you really wanted to know, E! Online's Marc Malkin reports that Tom will be wearing some pricey drawers -- he got six pairs of GrigioPerla briefs for $315 the other day in L.A.

OJ: I Would've Made a Bloody Mess

Can you believe this guy? Just when you thought he'd disappeared, there he is: OJ Simpson is set to tell FOX in an interview later this month "how he would have committed the murders if he were the one responsible for the crimes," according to a network statement. For some reason, Simpson has decided to tell the world what he would've done in the slayings of Nicole Brown Simpson and Ron Goldman, which took place in 1994 and for which he was convicted in civil court. "I don't think any two people could be murdered without everybody being covered in blood," says Simpson in a clip of the interview. The two-part sit-down airs Nov. 27 and Nov. 29.

Could Paris Hilton be stealing Harry Morton's affections – and getting Lindsay Lohan mad as hellfire in the process? Life & Style says that hotel heir Morton slept over at hotel heiress Hilton's house recently, and that Lohan hit the roof when she found out ... Nicole Richie took to MySpace yesterday to refute rumors that she had gastric bypass surgery reversed, thus explaining her (very slight) weight gain. She called the reports "ridiculous" and pointed out that the surgery is only recommended for people 100 lbs. overweight or more ... Queen Elizabeth II graced the premiere of the most recent James Bond installment, "Casino Royale," with her royal highness. It was just the third Bond premiere she's attended.