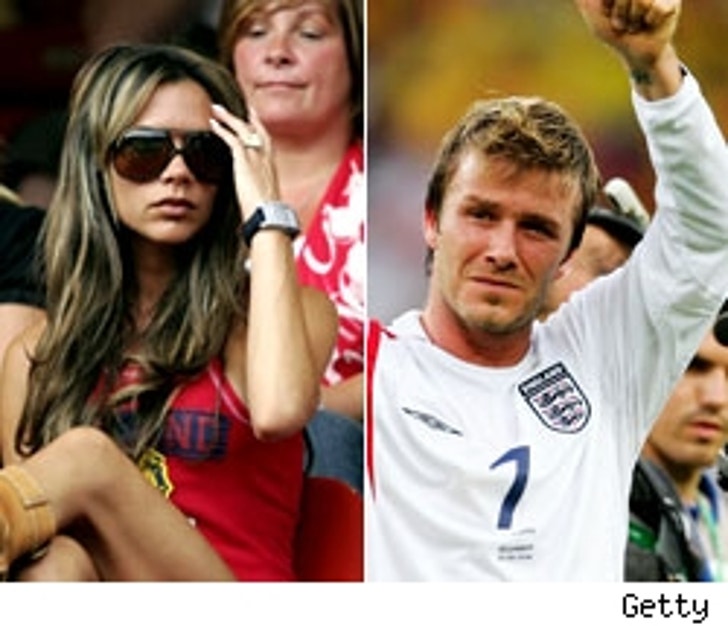 Not five days ago, David Beckham was washed up, a has-been, derided by the British press as a mere pretty boy without any soccer substance.

His wife, Victoria "Posh Spice" Beckham, was a paparazzi curiosity, noticed for her revealing and normally unfathomable fashion choices, if at all.

And yet, last Saturday, with one swerving swing of a soccer boot and a much-photographed episode of retching, the Beckhams have once again become media darlings.

David went from zero to hero for scoring the only goal in England's 1-0 win against Ecuador, despite vomiting on the field from dehydration. Victoria has raised her image considerably by making the England team's WAGs (wives and girlfriends) a kind of spectating Spice Girls, a new celeb species all its own.

The unlikely resurrection of the Beckham family points up how desperately short the World Cup – for all the hype it gets as the world's biggest sporting event – is on celebrity wattage. The British – and German, and Argentinian, and Italian, and American, even – media, desperate for some off-the-field action that doesn't involve grown men with their chests painted bright colors, have followed Victoria and her female retinue everywhere, and details of their shopping trips and bar bills have become legend.

Could it have been just happenstance that Victoria Beckham was seated at the Ecuador match beside the comely Cheryl Tweedy, the girlfriend of England fullback Ashley Cole, who is a pop star in the UK today much in the same way Posh was ten years ago? And the frequent replays of the Beckham goal inevitably included a shot of Posh bouncing up and down in celebration (and, yes, wearing an outfit of questionable taste for the mother of three young children).

Indeed, if David Beckham does in fact want to come spend his golden years in the U.S., as he has hinted, he picked a good stage to show himself off – this year's World Cup has attracted triple the ratings of the 2002 tournament for ABC and ESPN, and the big matches have yet to be played.

Of course, the bright glow of adulation could quite easily and cruelly bend back to scorn if England fails to get past Portugal in its quarterfinal on Saturday.