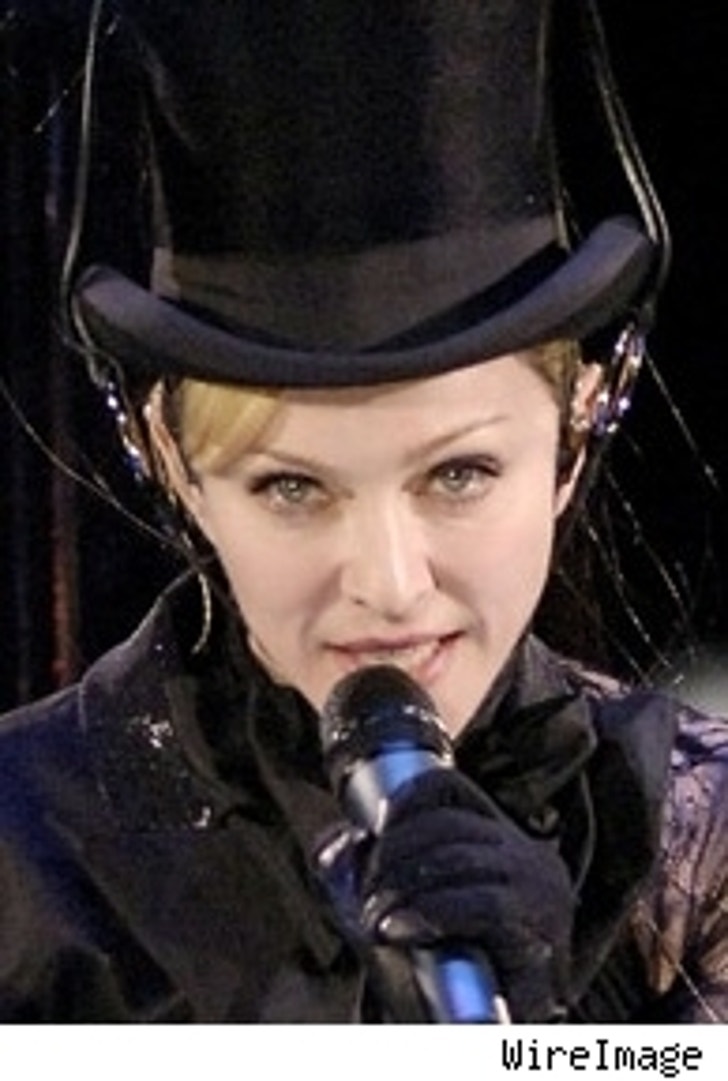 Despite facing the wrath of the Vatican for mock-crucifying herself on stage, Madonna was a gigantic hit last night with Roman audiences during the latest stop on her "Confessions" tour.

And while she was at it, Her Madgesty couldn't resist making a political statement about the war raging in the Middle East.

La ragazza materiale was hounded by fans outside her hotel and on the Via Condotti, according to the Italian dailies, and the fervor didn't stop there – many of the 70,000 fans of the pop queen camped out for hours outside the Olympic Stadium to get their spot near the stage. Lenny Kravitz, film director Pedro Almodovar, and Italian soccer star Francesco Totti were just a few of the celebrities who came out to see the show.

Meanwhile, during the concert, the always-provocative singer painted a large Star of David and the Muslim star and crescent onto the torsos of her dancers, uniting them in an armlock to make her own comment about the current Israeli-Hezbollah conflict. 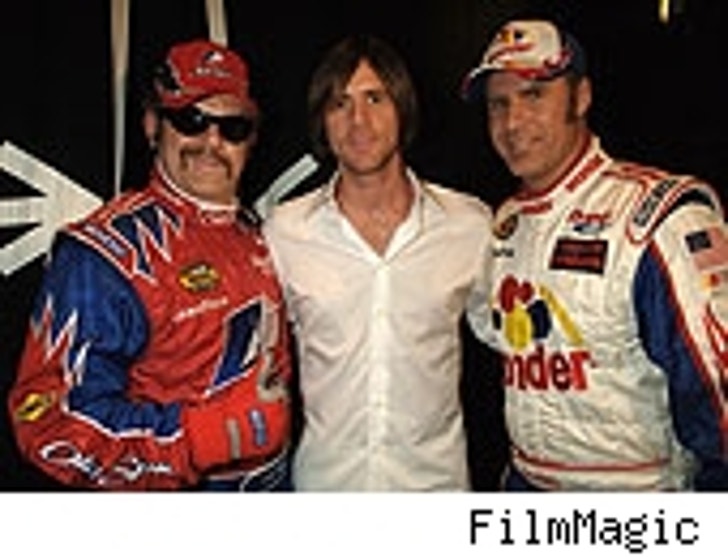 Yes, coast-dwellers, NASCAR is bigger than you could've imagined: The stock-car-racing comedy "Talladega Nights" crossed the box-office finish line way ahead of its rivals this past weekend, and became the second-highest original comedy opening ever, after "Bruce Almighty."

The movie's stronger-than-expected weekend has taken star Will Ferrell's stature to a completely different level, says Variety, and Sony has already bought the next pitch from the "Talladega" team of Ferrell, John C. Reilly, and director Adam McKay. Ferrell's previous high was $31.1 million for "Elf."

NASCAR fans apparently came out in droves for the film, with particularly strong numbers in the South and Southeast. Arriving in second place for the weekend was Paramount's "Barnyard," with $16 million, a good showing considering that audiences were still digesting "The Ant Bully" and "Monster House" from the weekends before.

"Pirates of the Caribbean" and "Miami Vice" came in third and fourth place, and new horror release "The Descent" finished in fifth with $8.8 million. 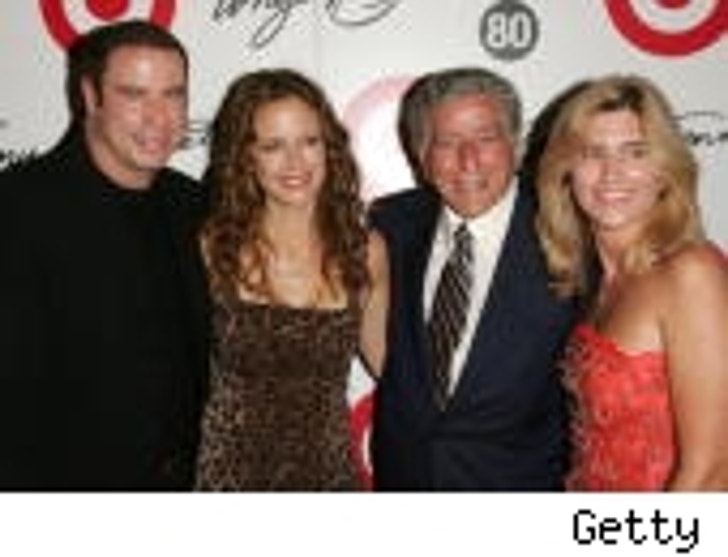 Actor and avowed Scientologist John Travolta gave Tony Bennett just the 80th birthday gift he'd no doubt been waiting for all of his previous 79 years – an art book by Scientology founder L. Ron Hubbard, according to Rush & Molloy. And though Travolta says that Bennett sang him "Fly Me to the Moon" as a surprise from Mrs. Travolta, Kelly Preston, for his own birthday party, Bennett remembered it differently: "He sent me a personal letter and asked me to be there." Hmmm. (Other, non-Scientologist celebs came out to fete Mr. Bennett last week, including Robert DeNiro, Bruce Willis, and Katie Couric.)

Meanwhile, in other Travolta-related news, Jennifer Lopez backed out of playing Sue Ellen Ewing in the film version of "Dallas," says Page Six, not just because she didn't like the script, but because she just wasn't feeling it with Travolta. The project's first director, Robert Luketic, also left the project, citing "creative differences." 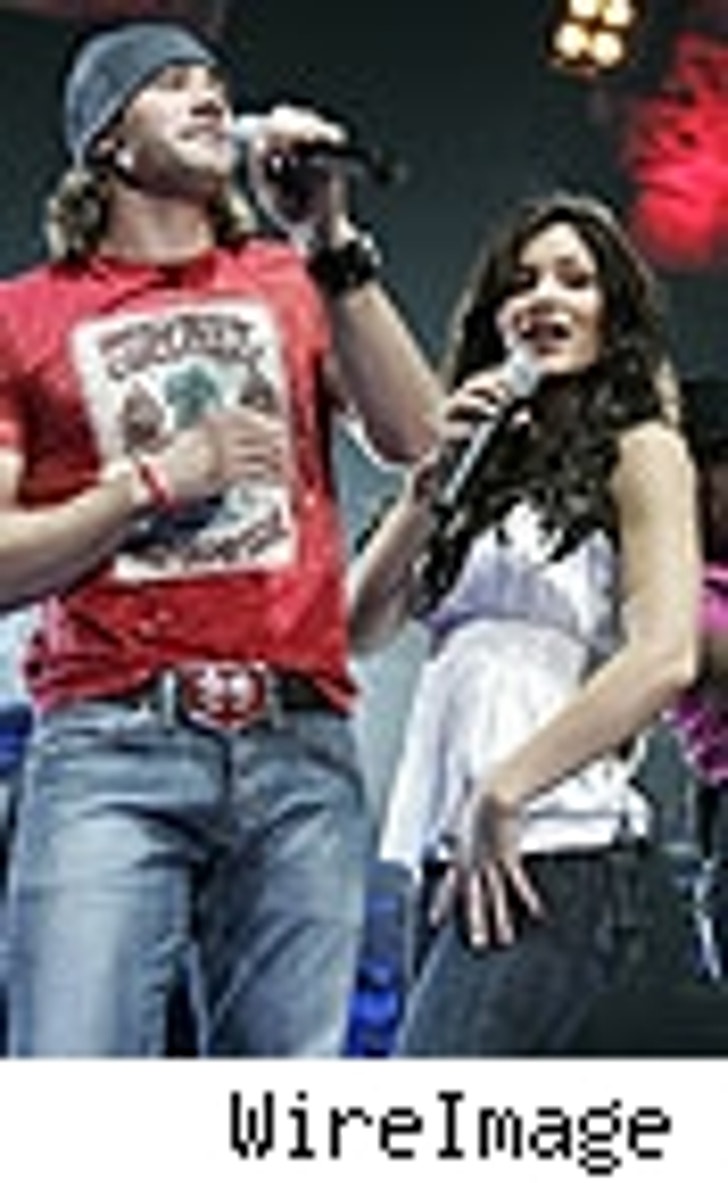 Simon Fuller, the man who created "American Idol," is introducing a new twist to his pet project – a songwriting competition that will be incorporated into the show and that will produce a song that the next "Idol" winner will sing.

In an interview in the Los Angeles Times, Fuller – who also produced Fox's megahit "So You Think You Can Dance," acknowledges that the format of the show has made it difficult to find good songs for the finalists to sing because there's no telling who's going to be in the final pairing. But with his new innovation, the choices will be broadened, and will add a new competition to the mix.

The competing songwriters' confections may also be performed in a Fox special by former Idols and finalists.

The formerly reclusive artist known as Prince is following up his surprise appearance on "American Idol" with an even higher-profile gig. Sources cited in the New York Post say that His Purple Majesty will be the halftime entertainment at next year's Super Bowl in Miami . . . Jack Nicholson is having to demolish Marlon Brando's beloved Mulholland Drive estate, called Frangipani, because the house has been beset by mold, according to the Times of London. Nicholson paid about $6 million for the estate after Brando's death two years ago. . . Jude Law couldn't get into Bed (the New York club) last week, say Rush & Molloy, after doormen wouldn't believe that he was Jude Law without ID confirmation. He finally convinced someone he was actually a movie star and went upstairs to check out Lady Sovereign.

Add To: My AOL, MyYahoo, Google, Bloglines
Sign up for:
AOL Alerts