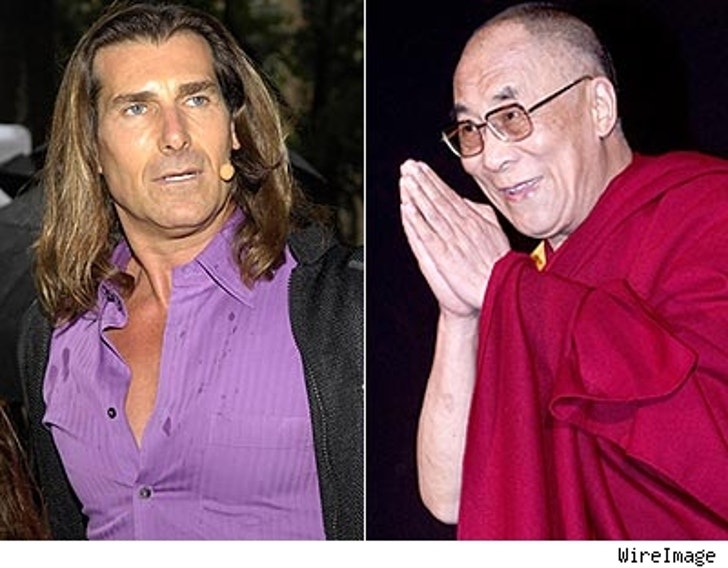 The Dalai Lama came through Hollywood this week to spread the peaceful word. Now if it had been to publicize a new cross-promotion campaign featuring Fabio ("I can't believe it's not Buddha"), we might have paid attention. Instead, we were preoccupied with the likes of these mere mortals.

During a press conference this week at the Toronto International Film Festival to promote his newest film, Bobby, the returning director, writer and co-star bemoaned his one-time fate at the hands of Disney which, in exchange for financing his 1996 flick The War at Home, insisted he also do D3: The Mighty Ducks... for free. "It was a devastating experience," he said of the inevitable D3 critical drubbing. Well cry me a Malibu river. As someone who's been around the Hollywood game for ages (since, in fact, making a debut at age 17 in the TV movie Seventeen Going on Nowhere), you know the rules. For free or for $20 mill, a BAD movie is a bad movie. KEEP UP THIS WHINING (extra up deleted) and we'll have to start referring to the Sheen clan as two and a half men.

Perhaps the only thing that can do more harm to a rapper's reputation than a rescinded felony charge is going back on their word, Word. After proclaiming in 2004 that his "Black Album"-Fade to Black documentary and CD combo was all part of a magisterial farewell, the Z-man went on a World Tour, collaborated with girlfriend Beyoncé and more. Now there is news of a November, Kanye West co-produced album entitled "Kingdom Come." On the upside, the rapper admitted to Entertainment Weekly that this was the "worst retirement, maybe, in history." On the downside, there's always the chance he could revert for his next coming-out-of-retirement party to his God-given name of Shawn Corey Carter, and release a Christmas album.

What's next? Rush Limbaugh trying to shed some pounds on NBC's The Biggest Loser? It's bad enough that MSNBC talk show host Carlson lost out on Dancing with the Stars to decrepit fellow TV interviewer Jerry Springer. But then, the Artist formerly known as Bowtie had to rub salt in the credibility wounds by tripping the light fantastic on Thursday's edition of The Tonight Show with Jay Leno with none other than Kiwi cutie Jessica Rose, a.k.a. Lonelygirl15. This intersection of a Boob Tube Boob and a YouTube Rube was the cherry on Carlson's melted Sundae, and for many channel surfers, ensured that the future sight of him taking politicians and newsmakers to task will forever rate a solid "1."

The malt beverage, imported from Australia , is called Star Ice. Not Black Sheep Ice. So why then is It Girl Public Relations now gleefully proclaiming that it has been tapped to connect the slim line bottled drink to Hollywood nightclub patrons, WITH partner JACKSON AS THE MAIN SPOKESPERSON. Hey, if your outfit is called Twit Girl PR, maybe. But jumping into the Lindsay-Paris-Jessica-Nicole quadrant with [only - TAKE OUT] MJ's 50-year-old sister covering your back is about as logical as putting up a billboard in Brentwood for Gary Coleman's instant cash service. With apologies to Janet, think of this as a "Marketing Malfunction."

The Governator may want to start referring to himself as hot blooded, thanks to this week's tell-all book by one-time girlfriend Barbara Outland Baker. Titled "Arnold and Me: In the Shadow of the Austrian Oak," it details how Arnold did indeed inhale just about every female admirer in sight during his early bodybuilding days. Although Schwarzenegger has already tried to damage control the arrival of the 344-page paperback by the now 58-year-old Baker, an English Professor (!), there's no chance of being able to tap dance around it with a "it depends what your definition of groupie is" defense. Might as well just book the Oprah appearance now and take the Republican National Committee off speed dial.