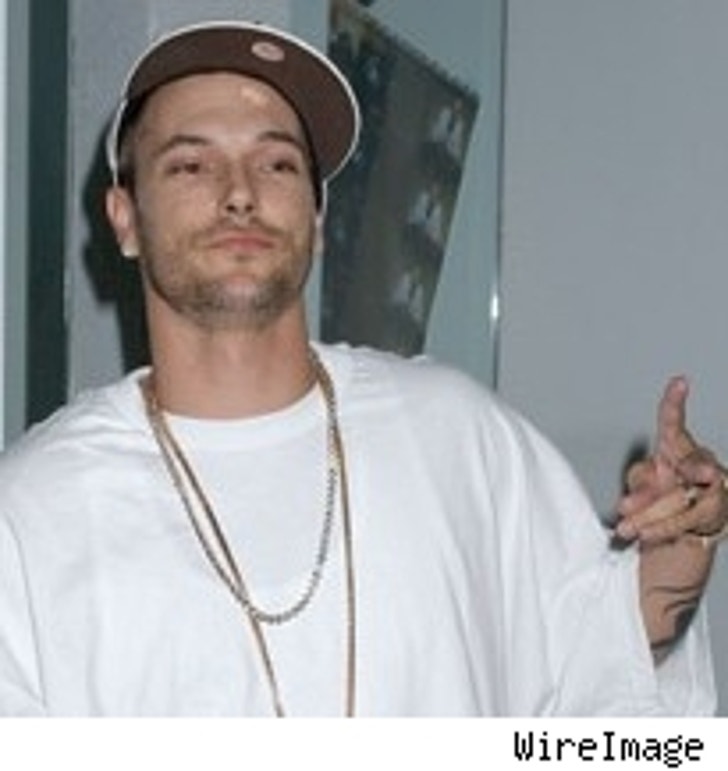 Uh, K-Fed, who wears the pants in this household again? The world's luckiest aspiring rapper (and former dancer) is apparently feeling some pangs of jealousy, and he's reportedly forbidding wife Britney Spears from using male dancers in her new video.

Brit, according to In Touch Weekly (via MSNBC), hired Matt Felker, who appeared in her steamy video for "Toxic," to slither with her in her next project. But K-Fed, who met Britney when he himself was a back-up dancer for the pop princess, has "insisted" that his wife fire Felker as well as the other boy dancers, and replace them with women.

Meanwhile, K-Fed angered both journos and fans at an event at the recently-opened Kitson Men store in LA, when he declined to talk to reporters outside, and then refused to have his picture taken with various admirers, according to PerezHilton.com. Federline's bodyguards wouldn't allow the fans near him.

Michael Scott, Anna Nicole Smith's Bahamian lawyer, has withdrawn as counsel for the former Playmate, saying that he and Smith and Howard K. Stern disagreed about legal strategy. Indeed, Scott said that he was particularly unsettled by Smith's decision to exchange vows with Stern on a boat in the Bahamas (and have them photographed for dissemination in celebrity magazines) even before burying her son Daniel, who died Sept. 10. Daniel remains in a Nassau funeral home while awaiting further instructions from the family.

"It was not really an amicable parting," says Scott to the Associated Press, adding that there were "strong differences of opinion between myself and Howard [K. Stern] over strategies." A birth certificate issued in Nassau lists Stern as the father, though photographer Larry Birkhead is challenging Stern's paternity claim.

Everything Donald Trump is a little outsized, of course, including the American flag he's hoisted over his Mar-A-Lago club in Palm Beach. According to this morning's Page Six, the town of Palm Beach says that the Stars-and-Stripes, at 15-by-25 feet and rippling atop an 80-foot pole, is 15 times larger than code allows. Mayor Jack McDonald says that the flag is "a little bit out of scale with the neighborhood," to which Trump replies, in the Palm Beach Post, "Obviously, permits are not necessary to put up an American flag." His reps are trying to sort out the issue.

More Strife in Pittsburgh for Sienna

Sienna Miller just needs to get out of Pittsburgh for a while – and maybe permanently. The actress, who issued an apology last week for comments she made about the city in Rolling Stone magazine, was refused service in a bar called Young's Tavern in Pittsburgh because she didn't have ID. According to bar owner Penny Folino in the Pittsburgh Post-Gazette (via Page Six), Miller, when she was denied drink, "ripped off her hat and said, 'I am Sienna Miller. I am a famous actress!'" Miller then stormed outside. Says Folino, "I'm sorry, we can't bend the rules for anybody."

Party Favors: David Bowie Takes On SpongeBob ... Who's On CSI? Daltrey ... It's A Pricey World After All

Rock royalty David Bowie said on his blog that he would be lending his voice to popular Nickelodeon cartoon "SpongeBob SquarePants" as the character "Lord Royal Highness." "It's happened. At last. I've hit the Holy Grail of animation gigs," wrote Bowie, who has a six-year-old daughter ... Who frontman Roger Daltrey will make a guest-starring appearance on "CSI" on Thanksgiving. It only seems fitting as each "CSI" features a different Who song as its opening theme ... Disney is now trafficking in $75 T-shirts. The company opens its first high-end apparel store, Disney Vault 28, today, at Downtown Disney, the collection of shops and restaurants in Anaheim.