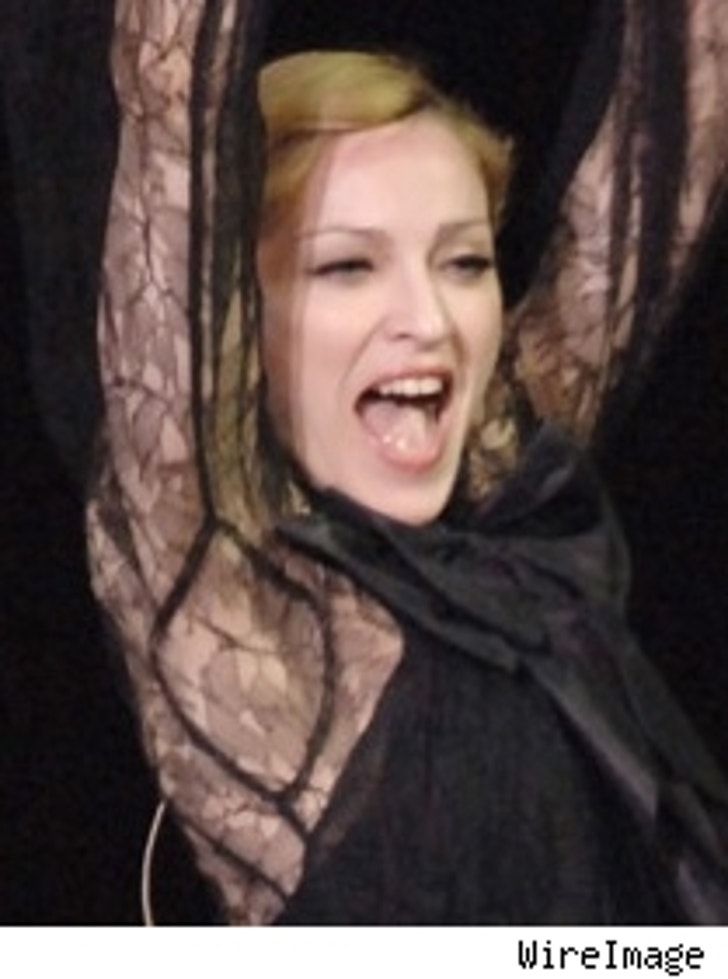 Madonna told Oprah yesterday that she was surprised by the media blitzkrieg she's faced since adopting a Malawian baby, and says the media is, naturally, to blame.

The Queen of Pop taped an interview yesterday on O's show that will air today – even though Oprah, as Rush & Molloy report, really doesn't like talking with her guests via satellite. But that's just how important it was for Oprah to get the first interview with Madge since her controversial adoption. And, according to an audience member who saw the interview, Madonna says that she met baby David's father Yohane Banda and looked him in the eye and got oral and written approval from him to adopt his child.

Meanwhile, FOX 411 reports that little David is happily settled in at the Ritchie-Ciccone household in London. Madonna's other kids, Lourdes and Rocco, "adore" David, and husband Guy Ritchie is "very happy" to have David in the family. Yohane Banda, for his part, tells Time magazine that he is resigned to giving up his child forever: "I don't want my child, who is already gone, to come back. I will be killing his future if I accept that."

Not everyone has it out for "The View's" resident Miss Smartypants Elisabeth Hasselbeck – ok, maybe almost everyone, including the producers of "Law & Order: SVU," who recently had a character named "Elizabeth Hassenback" raped twice and murdered. And yesterday on "The View," the real Elisabeth got mad about it.

On the show, as the New York Post reports, Hasselbeck recounted her conversation with executive producer Neal Baer of "L&O: SVU" and how she called him out for the unnecessarily proximate reference to her in the episode and his rather noticeable fake tan -- and then she threatened to boycott all "L&O" cast members from the show. When Baer offered an apology, Hasselbeck said she replied: "You don't sound sorry, it's not about feelings. . . and I want you to know I think it's socially irresponsible and I want to have you hear it from me before I vent on 'The View.' " Baer hung up on her shortly thereafter.

Rumer Willis is an impressionable teenager, and she ought to be home studying rather than out partying with the likes of Lindsay Lohan – or so says her pillar-of-authority stepfather Ashton Kutcher. A "source" tells Life & Style Weekly (via MSNBC) that "education is very important to Ashton, and he's afraid Rumer will think partying is better than studying." But, says L&S, Rumer isn't listening to her 28-year-old stepdaddy. "Rumer can't stop gushing about how cool Lindsay is. [She] feels honored by Lindsay's attention."

Maybe Barbra Streisand is just really trying to make sure she knows where superfan Rosie O'Donnell is at all times. As The Smoking Gun reveals in the rider for her current concert tour, Babs is requiring metal detectors at every door, on-call security staff, and even a police-dog sweep of the venue before she takes the stage for soundcheck. And not only does there have to be all this security, but plain-clothed guards have to be "neatly dressed in dark jackets, blazers, or sweaters." Amongst the other curiosities in Barbra's rider are 150 folding chairs for her staff and five – count 'em, five – living room sets, all of which have to be fabric covered, but not in vinyl.

George Clooney and the Coen brothers are set to team up again for their third film effort, a comedy called "Burn After Reading" about a CIA agent who loses the disk on which his memoirs are saved, reports the Hollywood Reporter. The trio have previously made "O Brother Where Art Thou" and "Intolerable Cruelty" together ... Strokes guitarist Nick Valensi and British wife Amanda de Cadenet have had twins, reports People. The twins are the couple's first kids, and de Cadenet has a child from her previous marriage to Duran Duran's John Taylor ... Actress-swim champ Esther Williams is in the hospital for treatment of a minor infection, and will stay there through the rest of the week. Williams, who is in her mid-80s, is expected to recover fully.