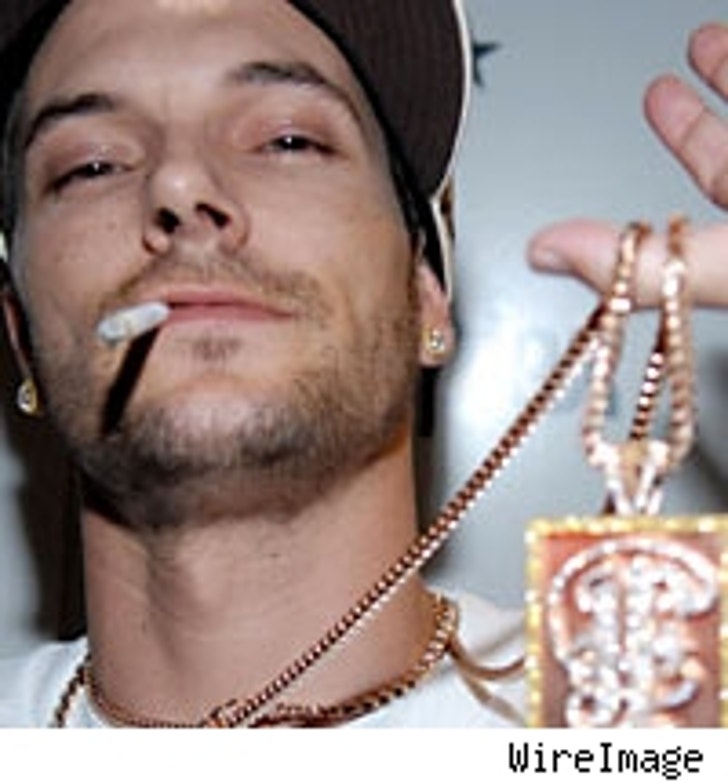 Ladies, Kevin Federline is available and willing – and he's letting the whole world (or the small crowd at his concert) know.

The self-proclaimed Fed-Ex gave his first post-breakup concert in Chicago at the House of Blues last night, and a TMZ spy says that the rapper made his appeal to the women of the Windy City, proclaiming before his minor masterpiece "Dance With a Pimp," "You know I am about to a free man, baby." He also made several other references to "the ladies" and that the Chicago "ladies" were "sexier than he remembered."

But there wasn't that much Feder-genius to be had, sadly, as the man of the hour only performed for about 35 minutes, and had to supplement his own slender offerings with other people's musical property, like Kanye West's "Gold Digger." And, no doubt disappointing the legions of non-fans who went just to hear him wax lyrical about Britney, Fed-Ex made only glancing references to his estranged wife.

Easy, girl! Denise Richards threw a photographer's laptop off a hotel balcony yesterday in a fit of anger – and ended up injuring an 80-year-old woman in a wheelchair.

The actress was upset about the presence of the paparazzi on the set of her movie "Blonde and Blonder" in a suburb of Vancouver, and accosted the snappers, nabbing their laptops and tossing them off the balcony of the hotel. Unfortunately for Richards, the flying computers hit the octogenarian in the arm, and the woman suffered "only minor injuries," said a spokesman for the Royal Canadian Mounted Police to People.

No charges have been filed, though an ambulance was called. The Mounties interviewed Richards and co-star Pam Anderson about the incident, and the film's production company agreed to pay for the damages.

Do Not Look At Luke

Luke Wilson is being called a "diva" on the set of his new thriller "Vacancy," and co-star Kate Beckinsale isn't having any of it. Page Six reports that the "Old School" star is making diva-ish demands like not wanting anyone in his line of sight except the director, including Beckinsale, and refusing to do off-camera reversal shots (where he's off-camera but Beckinsale is talking to him), using a stand-in instead. (Of course, the Post seems to be confusing Luke with his brother Owen, calling Luke a "blond funnyman with the distinctive nose.") The situation got bad enough that, at one point, when Luke needed to shoot his own reversals, Beckinsale sent out a picture of herself with a note reading, "Read your lines to this – it will be better for both of us." The pair's reps won't acknowledge any tension, and a friend of Wilson's calls the story "baloney."

Smash comedy moviefilm "Borat" might be banned by the Russian government, because a government agency has deemed it "disparaging in relation to certain ethnic groups and religions." The local distributor for Fox says he is unaware of any other film being banned in Russia besides pornography ... Sir Michael Caine thinks that David Beckham is too young to be knighted, and that his wife Victoria "just goes along for the ride." Beckham has been rumored to be in line for a knighthood the next time the Queen does her thing. "I've been Sir Michael for about five or six years now. [David] seems a bit young to me, I wasn't a Sir until I was 66!" he tells the Sun ... Mariah Carey sent two mink coats that she got from a Russian oligarch, but because she doesn't wear fur, she sent one of them to PETA, oddly enough, says Page Six. The other one she sent to Mongolia to keep someone there warm, presumably, but the coat has gone missing.