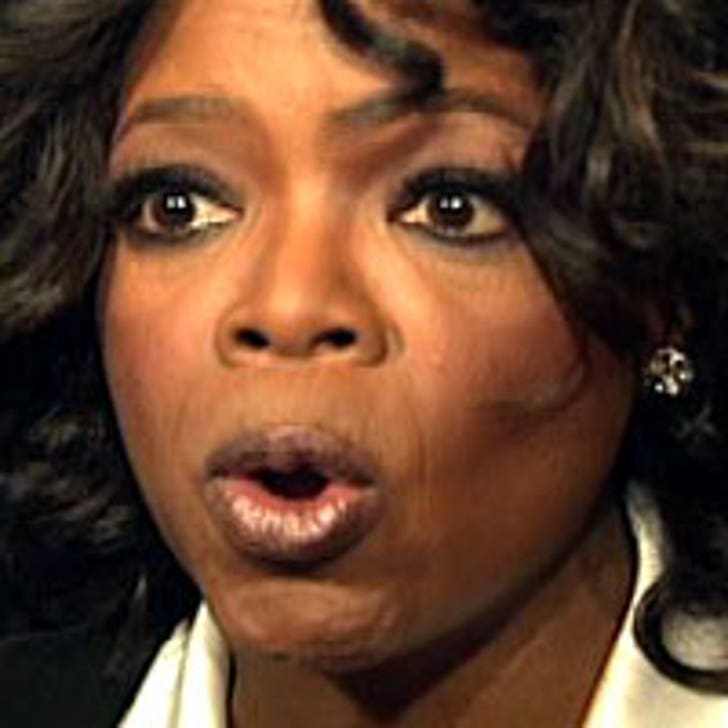 Oprah Winfrey will not be amused at Jamie Foxx's recent riff on those Oprah - BFF Gayle King gay-love rumors (which the friends have studiously and repeatedly denied).

At a tribute to Will Smith on Sunday, as Rush and Molloy report, Foxx told Will, "I was talking about you the other day. I was laying in bed with Oprah, and I turn over to Gayle and I say, 'You know what?'" The "howls" of laughter muffled the kicker line, but the damage was done. Foxx says he hopes Bravo cuts the joke from its broadcast.

After welcoming little David Banda into his home with open arms (and a throbbing crush of media scrutiny), Madonna hubby Guy Ritchie thinks they might want to rethink adopting another Malawian tot, as has been widely rumored. A source in the British tab The People (via MSNBC's The Scoop) says, "Although he loves little David as his own, he thinks they should be concentrating on their own relationship at this time, not adding a new one." What's more, Ritchie is reportedly "just not interested" in helping Her Madgesty out with her Kabbalah, in particular to create a website to help give advice to other members of the tribe.

Beyonce and Jay-Z to Tie the Knot Next Weekend?

Yes, we've told this story before – Beyonce and Jay-Z cause the gossips to titter by teasing that they're going to get married on some island or another, and then they don't. Well, this time, according to Page Six, it really really might happen. "Beyonce is throwing Jay a four-day birthday party, but it's really a wedding," says one source. Guests were told to have their passports ready by Friday for a party on a yacht in St. Barts. But then attendees will go to Anguilla for the wedding at tony resort Cap Juluca. No word from the rap mogul or the pop princess on their plans.

So Gwyneth Paltrow really doesn't hate being an American. In fact, today, she goes all Lee Greenwood and tells People that she's so "proud to be an American" and she was "so upset to be completely misconstrued and I never, ever would have said that." "That," of course, was a comment published in a Portuguese newspaper in which she allegedly said that British people are more intelligent and civilized than Americans. But Gwynnie, who says the out-of-context remarks were taken from a press conference she gave in Spanish, says that what she was trying to point out is that Americans live to work and Europeans work to live. "Obviously I need to go back to seventh-grade Spanish!" says Paltrow, though PerezHilton.com points out that she's given other interviews denigrating the American way by comparison to the Brit way.

Sienna Miller just couldn't wait to get on the phone with her "sweetie" (not sure if that was Jude or not) and used her mobile in customs at JFK, says Page Six, even though there are about a thousand signs forbidding it. Also, Miller was carrying two purses, rather than the one normally allowed ... Eddie Murphy, fresh off his comments in Europe that he doesn't know who former flame Mel B's baby daddy really is, has started dating Tracey Edmonds, the ex-wife of superproducer Kenneth "Babyface" Edmonds ... A Fender Stratocaster guitar used by Jimi Hendrix went for $168,000 at a Christie's auction yesterday, trumped only by the $192,000 winning bid for the handwritten lyrics to "Maxwell's Silver Hammer" penned by Paul McCartney. The same guy -- a bookstore owner from Texas -- bought both items.