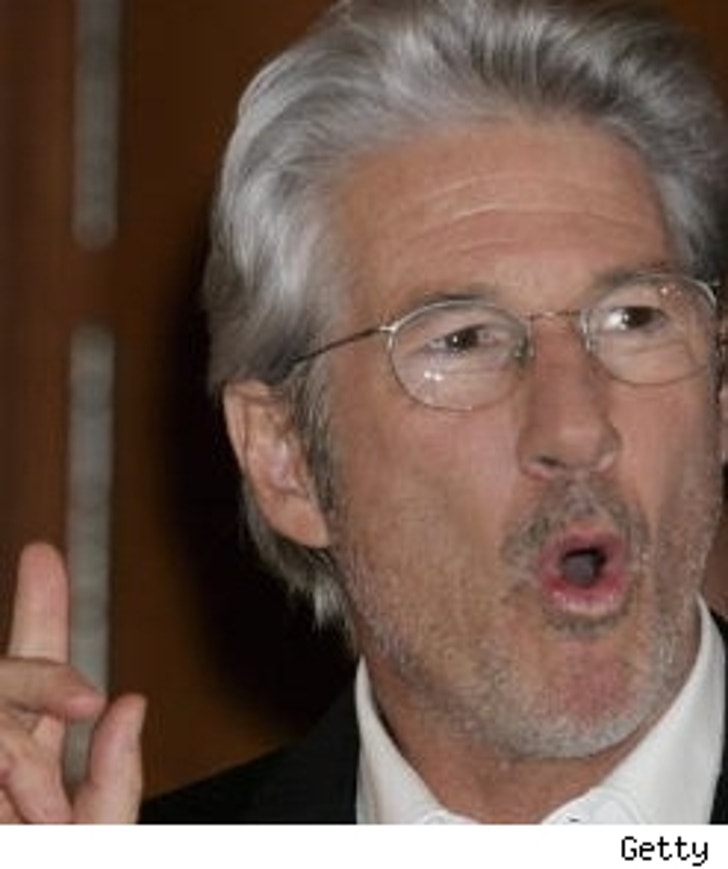 Sylvester Stallone thinks that Richard Gere's still mad at him for starting that whole gerbil-in-the, well, you know, story.

Stallone tells AintItCoolNews.com (via Rush & Molloy) that Gere continues to harbor a grudge (if not a rodent) because Gere believes it was Sly who started that ridiculous urban legend about Gere and the gerbil. Here's the deal: Gere and Stallone were on the set of 1974's "The Lords of Flatbush" and the two actors got into a tiff over lunch one day -- something about chicken grease, Sly's thigh, and a hot dog -- whereupon Stallone elbowed him in the side of the head.

The tension between the two actors became so fevered that Gere got kicked off the film, which still angers him today, apparently: "To this day [he] seriously dislikes me," says Sly, who adds, for the record, that he did not start the rodent rumor. Gere's rep had no comment.

Did Tom Lure J.Lo and Jim into the Church?

Could Jennifer Lopez and Jim Carrey be the latest high-profile converts to Scientology by Tom Cruise?

Lips flapped when J. Lo and funnyman Carrey were very visible guests at TomKat's Italian wedding extravaganza, with many wondering where their friendships might have started. But now, says Page Six, it appears that the "mystery link" might be the Church of Scientology. Carrey is taking the introductory and beginner's courses right now, says a source, and Lopez has started talking the Scientology talk via her BFF Leah Remini, an avowed Church member.

Problems may emerge, however, as Lopez's husband Marc Anthony is a devout Catholic (though that didn't stop Katie Holmes). J. Lo's rep had no comment, and Carrey's flack says he's not taking classes.

Brad Pitt tried to go all stealthy in a New York restaurant the other day – and it worked. Page Six says that the other day, the male half of Brangelina was in sci-fi-themed eatery Mars 2112 with son Maddox, where Brad gave the hostess the pseudonym "Jack M.," probably expecting to be winkingly "unrecognized." The woman actually didn't recognize him, which amused Pitt.

Meanwhile, at the after-party for "The Good Shepherd" at Time Warner Center, Pitt played good waiter to Angelina Jolie, keeping her quenched with martinis and letting her do the necessary socializing with Robert De Niro, Matt Damon, and Harvey Weinstein, among others.

Rosie O'Donnell is now breaking bread with Republicans? The outwardly lefty O'Donnell recently had dinner at the New York apartment of well-known Republican fundraiser Georgette Mosbacher, says Page Six. When Mosbacher said that she was lacking donations for a rehab facility for wounded combat vets, Rosie offered $300K on the spot, which surprised Rosie's wife Kelli and her boss Barbara Walters as much as it did Mosbacher. Said Mosbacher, "There's hope for bipartisanship." ... Retiring game show host Bob Barker, who turned 83 yesterday, will give $300,000 to help an elephant from the Los Angeles Zoo to be housed in an animal sanctuary. The pledge will match donations to send Ruby, a 45-year-old African elephant, to a sanctuary in San Andreas, Calif. ... Julia Roberts is producing and possibly starring in a feature adaptation of the bestseller "Happiness Sold Separately," about a suburban wife and her withdrawal from her cheating husband, reports Variety.