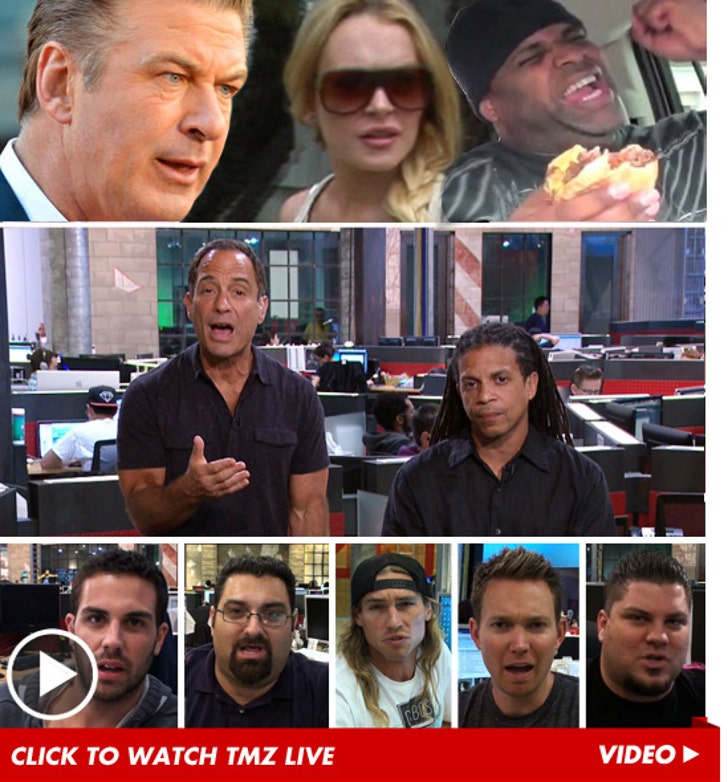 TMZ Live
Alec Baldwin's homophobic rant against a reporter makes us wonder ... why HE isn't getting slammed like Paula Deen? Sounds horrible to say, but is America more okay with verbal attacks on gays than Blacks?
Plus, Lindsay Lohan should have ZERO complaints about rehab after the news she got today.
And, hilarious YouTube food critic Daymon "Daym" Patterson has landed his own show on the Travel Channel ... and he joins us to explain how he did it. Daym, DAYM, DAYYYYYYYYM!

(0:00) Alec Baldwin attacked a reporter on Twitter by calling him a "queen" ... so why isn't he getting the same treatment Paula Deen is getting?
(10:00) Lindsay Lohan -- getting a legal break while in rehab.
(13:00) Kanye West -- still angry ... but is Kris Jenner calling the shots?
(15:00) Kylie and Kendall Jenner's parents are gonna be renting them a mansion in Malibu for the summer. There goes the neighborhood.
(18:00) Daymon "Daym" Patterson -- the greatest YouTube food critic of all time (yeah, we said it) joins us!
(24:00) Kim Zolciak -- smoking while pregnant ... is she putting her baby at risk?
(28:00) Paula Deen is getting dropped by a company an hour -- and it might be the biggest overreaction of all-time.
(32:00) Alec Baldwin explains his rant -- but Harvey's not buying it.
(34:00) Candid video of Michael Jackson playing with his kids is released.
(36:00) The floor is yours!
(41:00) Track star Lolo Jones is under fire for comparing a Trayvon Martin witness to Madea.