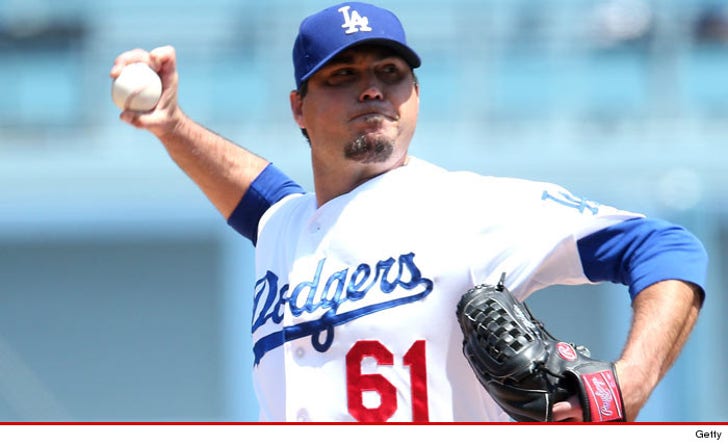 A Minnesota bartender claims L.A. Dodgers pitcher Josh Beckett hurled the N-word (with an R) at her ... but the Dodgers say they've been investigating the claim and there's NO evidence to support it ... sources connected with the team tell TMZ Sports.

The bartender says Beckett -- along with pitcher Clayton Kershaw, Orel Hershiser and 3 other Dodgers broadcasters -- were at the bar at the Grand Hotel Minneapolis on April 28th when Beckett allegedly dropped the N-bomb.

In a complaint she filed with the hotel, Mary Rohr says, "He used the N-word towards [sic] me while hanging on his teammate, Clayton Kershaw, and then asked for another cocktail," the bartender said in a letter to hotel management.

She insinuates Beckett was drunk and she was cutting him off, claiming, "I offered him a water and he began cursing at me."

Rohr says she confronted Kershaw when Beckett was in the bathroom, and he said, "Well, he's from Texas."

Sources connected with the Dodgers tell TMZ Sports ... they take any such allegation seriously and launched a full investigation, but so far her story seems "absolutely false."

We know Beckett told the team he absolutely did not use the N-word.

There are problems with Rohr's story. For starters, Clayton Kershaw was nowhere NEAR Minneapolis Monday ... we've learned he never set foot in Minnesota that day. Now we're told Rohr has changed her story and is saying the guy LOOKED like Kershaw but it was actually Dodgers pitcher Paul Maholm.

Dodgers sources say they've interviewed various people connected with the team who were in the bar -- and NO ONE heard Beckett get angry and use the N-word.