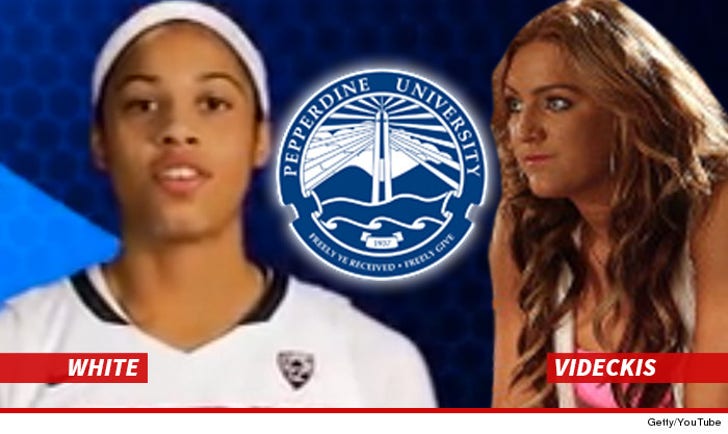 Two female college basketball players have sued Pepperdine -- claiming the University is running them off the basketball team because they are involved in a lesbian relationship ... TMZ Sports has learned.

The women behind the suit are Haley Videckis and Layana White -- who each transferred to Pepperdine from other school because they believed they would have a better shot at the WNBA.

But according to the suit, several officials at Pepperdine -- a Christian-based university in Malibu -- began to suspect the players were in a lesbian relationship earlier this year ... and started looking for an excuse to boot them off the team.

According to the suit, the women claim the basketball coach, Ryan Weisenberg, gave a speech on the topic of "lesbianism" in April ... in which he said, "Lesbianism is not tolerated on this team. It is the reason why teams lose."

Long story short, Layana claims she has eligibility issues with the NCAA and Pepperdine won't help because of her sexual orientation. Haley claims she has recovered from a minor tailbone injury, but the school won't clear her to play even though her doctor has signed off.

The women are suing for discrimination, harassment, retaliation and more -- and are seeking unspecified damages.

6:00 PM PT -- A rep for Pepperdine issued a statement to TMZ Sports saying, "We take allegations of this kind very seriously. We conducted an immediate and thorough investigation and found no evidence to support these claims."

"The University remains committed to a diverse and inclusive environment."