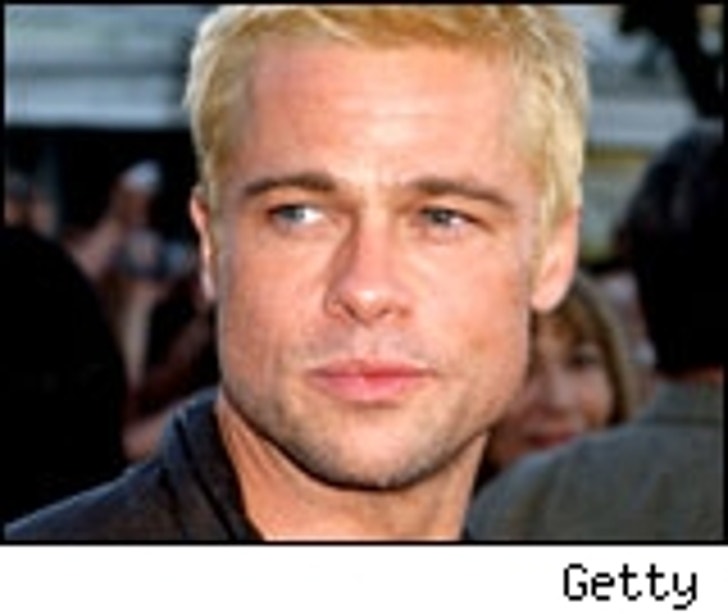 Brad Pitt's lawyer, John Lavely, has sent around a letter threatening legal action against anyone who publishes pictures of the star taken while he was on the balcony of his Los Angeles home.

Pitt's publicist, Cindy Guagenti, tells TMZ that the pictures were taken illegally on Pitt's property, but definitely did not include any nude shots. "I have a call into Brad's lawyer but the papers did not say (anything) about nudity," Guagenti said. "They were on his property shooting and that is illegal."

This isn't Pitt's first tangle over photos. He sued Playgirl magazine in 1997 over nude photos the magazine published with the headline, "BRAD PITT NUDE!" Pitt alleged that the photos were illegally snapped by a trespassing paparazzo as Pitt layed out while vacationing with then-girlfriend Gwyneth Paltrow in the West Indies in 1995.

Pitt won that case; a judge issued a restraining order against the mag preventing it from shipping any more copies, and eventually ordered Playgirl to recall all the issues.

Pitt even had problems with photographers earlier this year. A man was arrested on the set of the film, 'The Assassination of Jesse James by the Coward Robert Ford,' back in September. The photog was found hiding in a building on the Western's set and was arrested for mischief and interference.

But Pitt isn't the only star who's been tussling with paparazzi lately. In fact, it appears to be becoming something of an epidemic in the Hollywood community. The month of June alone featured three infamous star-meets-paparazzi incidents.

On June 2, a paparazzo reportedly struck Lindsay Lohan's Mercedes in LA while in pursuit of a photog, and was arrested on assault charges.

The next day, Cameron Diaz sued the National Enquirer for more than $10 million, alleging the celebrity tabloid libeled her in a story that claimed she cheated on boyfriend Justin Timberlake by kissing an MTV producer.

And then on June 20, Tom Cruise had a slightly more unusual run-in with a photog. The actor was squirted with a water gun by a fake reporter while at the London premiere of 'War of the Worlds.' The fake reporter and his crew received something much much worse than a lawsuit: a chastising from Mr. Cruise himself.

"That is incredibly rude," Cruise told the man. "I'm here giving you an interview, and answer your questions and you do something really nasty. You ought to be ashamed of yourself."

In fact, this isn't even the first time this year that attorney John Lavely sent around a letter like this. Earlier this month, Lavely threatened suit against anyone who published topless photos of another of his A-list clients: Pitt's ex, Jennifer Aniston.

Aniston ended up suing photographer Peter Brandt, alleging that he violated the star's right to privacy. They are scheduled to appear in court again on Feb. 16, 2006.

Calls by TMZ to Lavely were not returned.

Brad's had so many looks to be captured throughout the years -- heck, he's practically the male Madonna. Check out our video and see if you agree with our "Brad HOT Meter."