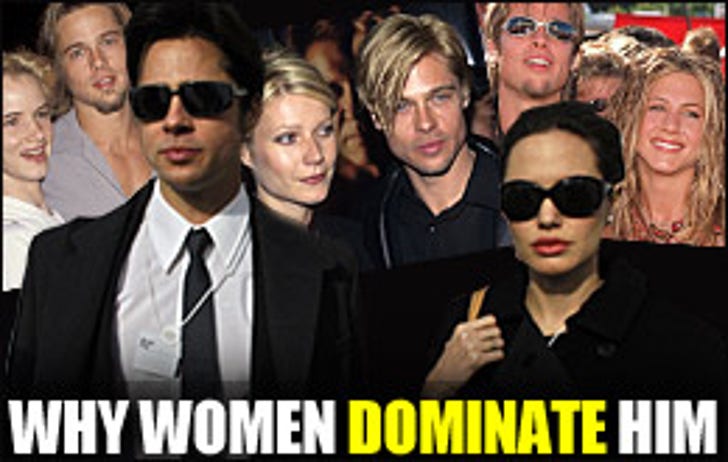 As rumors swirl about Brad Pitt's weekend marriage to Angelina Jolie, TMZ.com has examined Pitt's former looks and loves, and it's apparent -- the famous actor is profoundly influenced -- physically and otherwise -- by his real life leading ladies.

In the early 90's, after Pitt hooked up with the wild actress Juliette Lewis, his physical appearance became decidedly bohemian, mirroring hers...

Fast forward to the mid-90's, when Brad and Gwyneth Paltrow became an item. Not only did Pitt radically change his look, he practically became Gwyneth's mirror image. He even assumed Gwyneth's less-than-perfect posture, slouching at events.

As we entered the millennium, Brad married Jennifer Aniston. Not only did he cast himself in her image, they even shared the same highlights for their wedding ceremony.

Psychotherapist Candice Slobin has a theory. "There's some essential element of his own self-identity that may be missing." She adds, "He's absorbing something into his own identity that has not developed on its own." But Slobin also points out, "It is not necessarily a negative pattern if what he is absorbing from these women is life-enhancing."

Psychotherapist Joanna Poppink has another explanation. "He's an actor," she says. "So he is used to studying people, and by morphing, this adds to his mystique."

Do Pitt's chameleon-like changes make him a "girly man"? Slobin says no. "There is no absolute standard to masculinity. It may just be that he really likes woman and likes what they have to offer." Slobin calls him "an adaptable man.