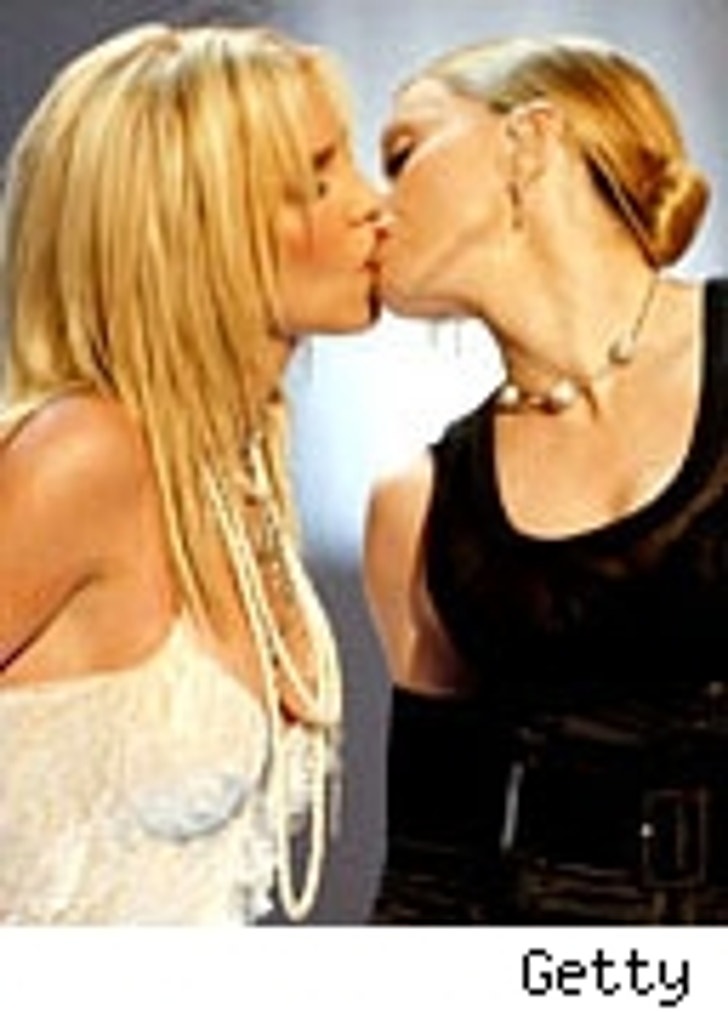 Not long ago, they were locking lips on MTV. Now, Madonna has ended her friendship with Britney Spears because Brit has publicly turned her back on Madge's beloved Kabbalah -- and she wants the wedding present she gave Britney and K-Fed back.

Plus, Jacko, Kidman and other top stories.

Not long ago, they were locking lips on MTV. Now, Madonna has ended her friendship with Britney Spears because Brit has publicly turned her back on Madge's beloved Kabbalah -- and she wants the wedding present she gave Britney and K-Fed back.

According to a report on MSNBC this morning, Madonna is miffed that her fellow pop diva has so openly ditched the trendy mystical religion that has been "adopted" by many Hollywood A-listers; on her personal web site, Britney recently wrote, "I no longer study Kabbalah, my baby is my religion." What's more, Spears has been reportedly consulting a "Christian life coach" to help her through her reported troubled marriage (which she denies) to Kevin Federline -- not exactly the Kabbalah way.

But after spending months teaching Britney the system and apparently spending a fair sum to help bring her into the fold, Madonna is displeased with her protege: "She feels she has wasted time, money and precious gifts on Brit," says a source quoted by Virgin.net. One of those "precious gifts" is a twelfth-century book on Kabbalah that Madonna gave the Spears-Federlines for their wedding, and now she'd like it returned, according to Walls. 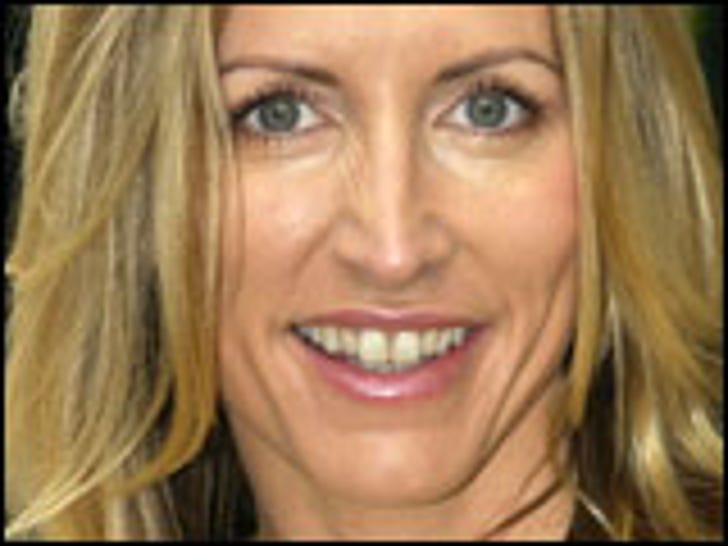 Heather Mills McCartney faces another round of salacious allegations about her past, as a British tabloid digs up four-year-old rumors -- denied and discredited at the time -- that the future Lady McCartney was once a very expensive call girl who plied her trade with rich Arabs.

As Rush & Molloy report this morning, the News of the World tabloid said Sunday that Mills McCartney was in her 20s when infamous Saudi arms dealer Adnan Khashoggi supposedly paid her more than $10,000 for sex, and that a Saudi prince paid almost that much for a three-way encounter. Two former escorts were cited by an English tabloid as former "colleagues" of Mills McCartney, and a Khashoggi private secretary confirms the stories.

Her lawyer, Stephen Taylor, issued a statement Tuesday morning saying that Mills McCartney, who denied such claims when they surfaced four years ago, plans to bring legal proceedings against the News of the World as soon as her divorce from Sir Paul is complete and that she "intends to sue at that stage all parties, including individuals, who are intent on damaging her reputation."

The statement adds that Mills McCartney has been recovering from surgery and that the coverage of her divorce and the recent press has caused her "further distress and illness."

Another British paper -- the rather more journalistically refined Independent -- writes that all the negative press against Sir Paul's estranged wife, including the recent unveiling of old pornographic pictures of McCartney Mills in a German photo book, is "a deliberately orchestrated attempt to discredit the former model, who has always had a difficult relationship with the press." Sir Paul, for his part, has denied any involvement in such a smear campaign. 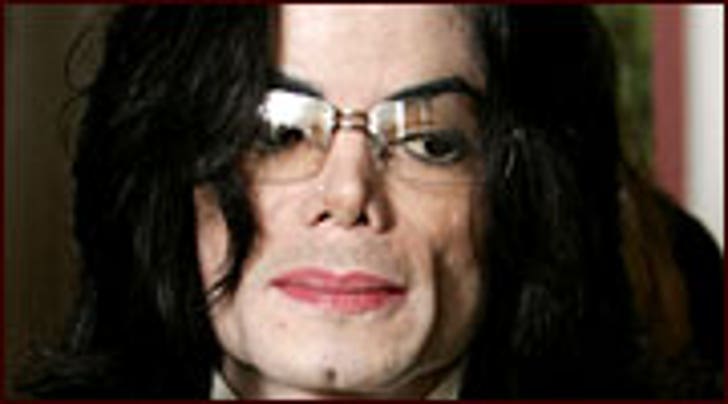 Despite a subpoena requiring his presence in Los Angeles Superior Court next Monday for a case with former associate and alleged pornography peddler F. Marc Schaffel, Michael Jackson won't be appearing in court at all.

Roger Friedman of Foxnews.com reports this morning that Jackson's lawyer Thomas Mundel "ripped up a subpoena" presented by Schaffel's attorney Howard King, and then announced at a London deposition that his client would not appear in court at all. Schaffel is suing Jackson for $4 million, and Jackson is countersuing Schaffel, alleging that he stole art from him and charged him fees he wasn't owed.

Friedman also says that Jackson's recollection of events is deeply vague, and that he is defending himself in the case by portraying Schaffel as a producer of gay pornography. Furthermore, Jackson is describing himself as a resident of Bahrain, and his lawyer says that he is now "the wealthiest homeless person in the world." 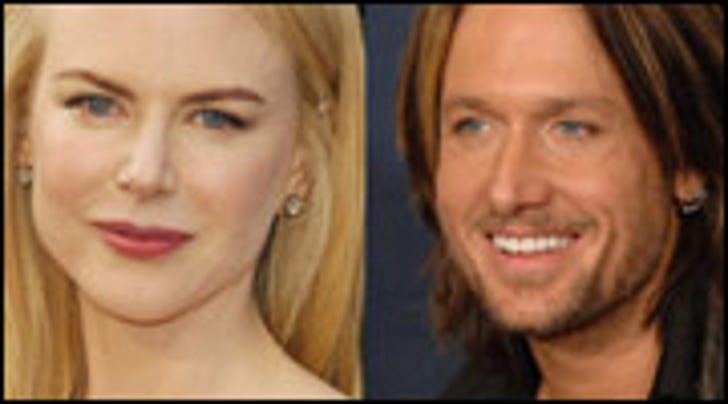 Though she never fully embraced Scientology while married to Tom Cruise, Nicole Kidman has now re-adopted Catholicism in her preparations to marry country singer Keith Urban.

The actress, according to MSNBC's Jeannette Walls, has become more involved with the religion as she prepares for her wedding. "For Nicole, you know this is a spiritual homecoming, coming back to the church and her faith in her old parish," says Jesuit Father Paul Coleman in the Catholic News Service. It described Coleman as "a longtime friend of the Kidman family who advised them on the annulment of Kidman's marriage with Tom Cruise."

Meanwhile, Kidman doesn't just stay skinny -- she works at it. According to a waiter at New York's Il Buco restaurant, cited this morning in Lloyd Grove's Lowdown column, Kidman dined over the weekend with Urban and, though the restaurant is known for its rich pastas and succulent meat dishes, ordered only a cheese course. 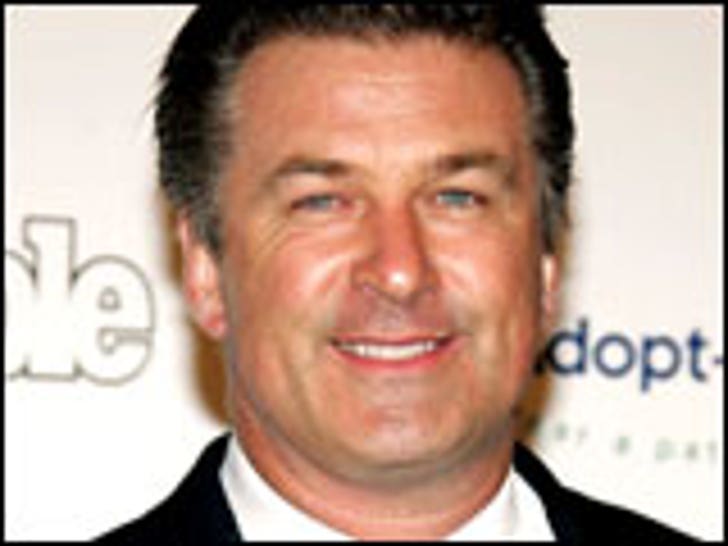 When Patricia Field, the costume designer for the upcoming film "The Girls' Guide to Hunting and Fishing" starring Sarah Michelle Gellar and Alec Baldwin, quit the production late last week, she blamed Alec Baldwin's behavior for her departure.

But Lloyd Grove reports this morning that Baldwin, never one to hold back his ire, isn't taking the allegation lightly. He calls Field "a fruit-salad head" and a "whack job, 24-7," among other things. "When Pat left, virtually everybody on the film was relieved. She is a cranky, miserably unhappy woman." Gellar defends Baldwin, telling Grove, "Alec has been a doll, and anything else you've heard is entirely one-sided and untrue. Alec has been a dream co-star."

Field, for her part, declined to comment on the fracas.