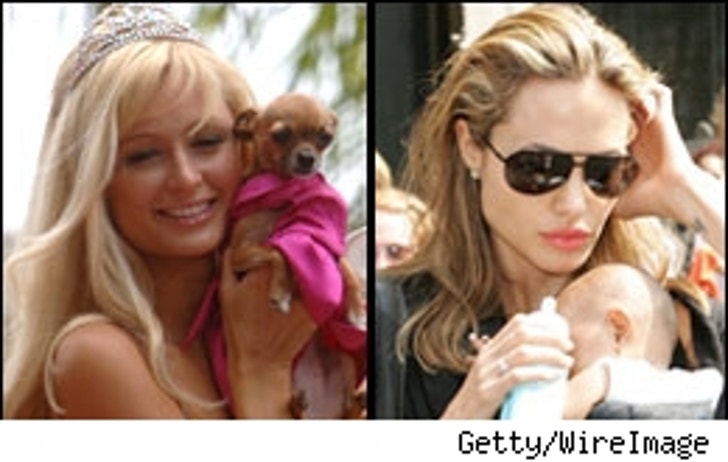 It's the Brangelina charity effect.

Thanks to the media mileage Brad Pitt and Angelina Jolie have wrung out of their Africa charity work, celebrities today are falling over themselves to show the world how public spirited they are.

Latest example: Nicole Kidman, who spent the days before her wedding to crooner Keith Urban visiting Sydney's Children's Hospital with her own kids. The happy couple is reportedly asking guests to donate to charity rather then buy gifts.

In addition, Cher in recent days has drummed up money for troop helmets in Iraq, while K-Fed has thrown his substantial celebrity weight behind the fate of ... pennies.

While the new round of celeb heart pouring is an outgrowth of Brangelina's work in Africa, other celebs have been big in the free-money circuit for years. Big donators include: Oprah Winfrey, who gave $52 million in 2005 to charity; Sandra Bullock, who donated $1 million twice, once to the Red Cross following 9/11 and the second to Tsunami Relief; and Paul Newman, who has donated nearly $200 million in after-tax profits of his "Newmans Own" products. There's also Bono who, in our opinion, should be reaching sainthood by the end of the week.

Then there's Paris Hilton, who somehow seems not to have received the charity memo.

Our favorite socialite was recently accused of leaving an Australian children's charity high and dry. Paris reportedly pledged to organize a star-studded benefit concert in Los Angeles to benefit Paradise Kids. The charity claims Paris said she would have friends Backstreet Boys and Blu Cantrell perform, and at one point even Missy Elliott's name was mentioned. So far, two years have passed and Paris has yet to return with the big-name acts. We called Paris' rep and he said he was researching the matter. At press time had not gotten back to us.

This isn't the first time Paris has gotten in trouble for snubbing a charity. At the Elton John Aids Foundation post-Oscar bash she failed to pay for a ticket for entrance to the party. A rep later told the press that Paris had instructed her accountant to cut a check for $10,000 for the foundation.

To help Paris clear up her bad charity karma, we checked to see how she could help others if she followed Angelina's lead and donated one third of her earnings.

According to Forbes magazine, Paris made $6.5 million in 2004. If she gave one-third of that to charity, roughly $2.1 million, here's where the money could go.

* She could build 429 one-room school houses in a developing country, according to Free the Children.

* The North Star Foundation says they could specially train 858 dogs to be companions for autistic children.

* According to Habitat for Humanity's website, they could potentially build either 35 houses in the United States or up to 2,681 houses in some third world countries.