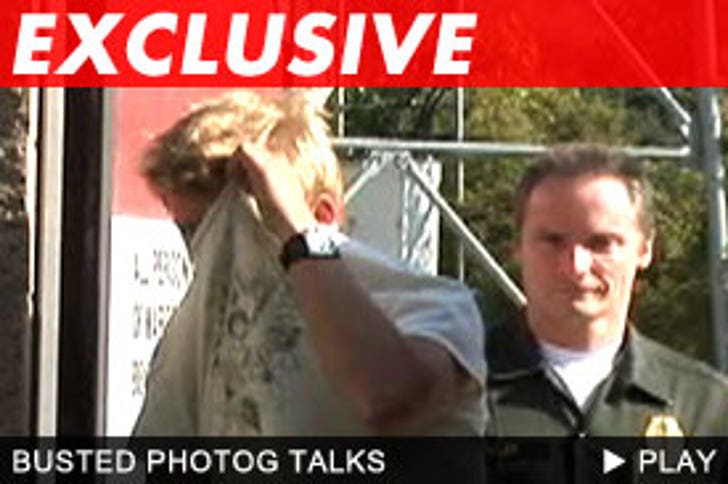 The paparazzo arrested yesterday at a day care center attended by Maddox Jolie-Pitt tells TMZ that he did not trespass on the grounds of the center nor did he jump any fences surrounding the facility, and that the police "wanted to make an example out of someone."

TMZ talked to Clint Brewer, who did not want his face shown on camera, last night as he left Lost Hills police station. The 25-year-old freelance photographer said he was detained there by sheriff's deputies for six hours. He says police impounded his Volkswagen Touareg SUV and over $100,000 worth of equipment inside, and that he won't be seeing the stuff until at least July 16, when he has to appear on court on a misdemeanor charge of trespassing.

Hordes of celebrity photographers and videographers have been staking out the Jolie-Pitt compound, its surroundings, and its residents ceaselessly since the couple returned from Namibia with baby Shiloh Nouvel. Brad Pitt's security chief, Rich Malchar, issued this statement yesterday: "School officials and myself feel that some of these paparazzi are like predators who will recklessly take and sell photos of innocent children for money."

The actual incident for which Brewer was arrested by the Los Angeles County Sheriff is still somewhat unclear, as it was reported yesterday that the lensman jumped a fence at the day care center, and then that he was hiding in bushes at the facility trying to take pictures of young Maddox when he was apprehended by the a member of the day care's staff.

Brewer claims that there is no fence at the day care- at all- and that he didn't take any pictures of Maddox, the proof of which is in the camera that the police confiscated.

He says that what he was actually arrested for was parking his car on private property, not for trespassing on the grounds of the facility. According to the written complaint that Brewer showed TMZ, the arrest was made for a "602(N)P.C./Trespassing; Driving Veh. On Private Property without Owner's Consent."

Brewer says he was driving up the Pacific Coast Highway to the Jolie-Pitt residence in Malibu when he saw the family going towards the day care center, at which point he followed them and "went to have a look but didn't see anything."

The Jolie-Pitt security asked him to stop shooting, and called the police, who, according to Brewer, "turned up and wanted to make an example out of someone and has [sic]," after which they took him to the station for booking.

Before TMZ spoke to Brewer, he walked out of the police station with his shirt covering his face- classic photo-avoidance maneuver- an ironic pose for someone whose livelihood is earned on the other side of the lens.