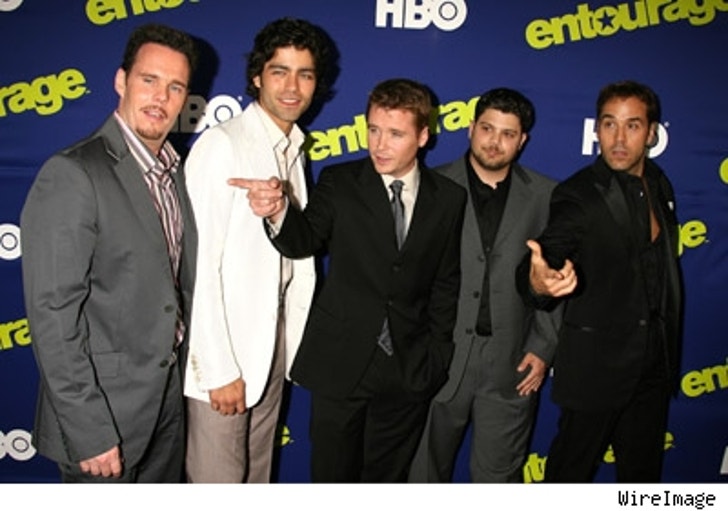 It was yet another tumultuous couple days for Vinny and the boys on last night's episode of "Entourage."

Before you could say "ugly green ogre," Vince sent boyhood pal Dom packing with "a Hummer and an apartment" for stealing a priceless Shrek doll and now he has to make a momentous choice between playing drug kingpin Pablo Escobar and donning the wetsuit in "Aquaman 2."

As usual, of course, Team Chase did plenty of spending and name-dropping along the way, prompting us to wonder about that helicopter ride to Santa Barbara, the animation king, and all those scripts that Ari tossed aside like so many former assistants.

ART: Vince decides that he doesn't want to deal with traffic to get up to Santa Barbara for the wine soiree at chez Rubenstein, so he ferries the guys in style in a chopper. How much for the ride – and how much time would they actually save?

LIFE: According to Island Express Helicopters, an LA helicopter charter company, a round trip from Santa Monica Airport to Santa Barbara would be roughly $5,500, before any landing fees or taxes. And the journey is roughly 50 minutes, about half of what it would take from Beverly Hills to Santa Barbara – but without any traffic, which can add hours to the trip, as anyone who's gotten stuck on the 101 freeway can attest.

ART: To get the lead role in "Medellin," Vinny has to suck up to the "animation king," a Hollywood power player named Phil Rubenstein who brought "Shrek" and "Madagascar" to the big screen. Who is this Phil Rubenstein anyway?

LIFE: Well, he doesn't exist in the real world, but he's awfully reminiscent, at least professionally, of a certain Jeffrey Katzenberg, who really did produce "Shrek" and "Madagascar" as one of the principals of DreamWorks SKG, the studio he founded with Steven Spielberg and David Geffen. And like the fictional Rubenstein, Katzenberg's got plenty of coin: He and his partners sold DreamWorks to Paramount Pictures late last year for $1.6 billion. Oh, and by the way – a quick check on eBay turned up a high bid of $19.99 for a mint-condition Shrek doll.

ART: Ari flaunts the prestigious upcoming projects that Vince will be turning down when he does "Medellin," including "Flight," directed by Darren Aronofsky, and "Sandman," described as "'Being There' meets 'Lawrence of Arabia,'" helmed by David O. Russell. Will we ever see either of these projects in a theater near us?

LIFE: Probably not. According to the Internet Movie Database, Aronofsky's ("Requiem for a Dream") next project is "The Fountain," a science fiction-ish epic starring Hugh Jackman and Aronofsky's wife Rachel Weisz, which comes out later this year. David O. Russell ("Three Kings") will be directing Vince Vaughn in a comedy called "The H-Man Cometh," about a radio talk-show host who begins to take on his listeners' neurotic qualities.