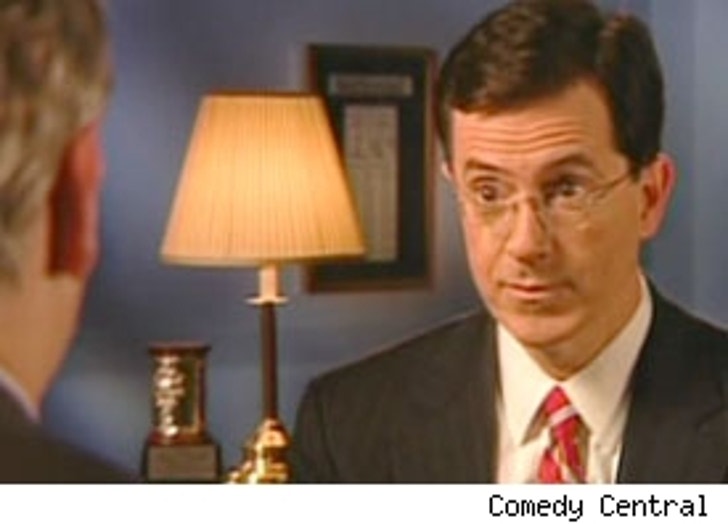 Stephen Colbert is what Bill O'Reilly would be if he had a sense of humor. For two seasons, Colbert has satirized the right-wing political pundit for the amusement of Comedy Central viewers. Colbert has been so successful that his word "truthiness" was voted the 2005 Word of the Year by the American Dialect Society. He's even spawned his own political party.

All of this makes it that much harder to understand why politicians continue to be caught off guard by this "fake" political pundit. Colbert's "Better Know a District" segment has caught more then a few representatives off guard. Take Rep. Lynn Westmoreland, a staunch supporter of displaying the Ten Commandments in the House and Senate. When Colbert asked Westmoreland to recite the commandments, the confounded Congressman got stuck at number three. Recently, Colbert interviewed Congressman Robert Wexler, who said he enjoys prostitutes and cocaine because "it's a fun thing to do." Wexler later told the The Palm Beach Post that he was playing along with the joke and appeared on the show at the urging of his younger staffers.

And it doesn't stop with members of Congress. Colbert's interview with film maker Robert Greenwald was recently showcased on a web site that is collecting donations for Tom DeLay's defense fund. The site mistakenly thought that Colbert was completely sincere in his attack on the author, asking him such hard-hitting questions as "Who hates America more, you or Michael Moore?" The site trumpeted that Robert Greenwald "crashed and burned" during the interview.

We wonder if these politicians and their followers have the same public relations advice as Britney Spears. Let's hope for the sake of comedy they don't wise up.