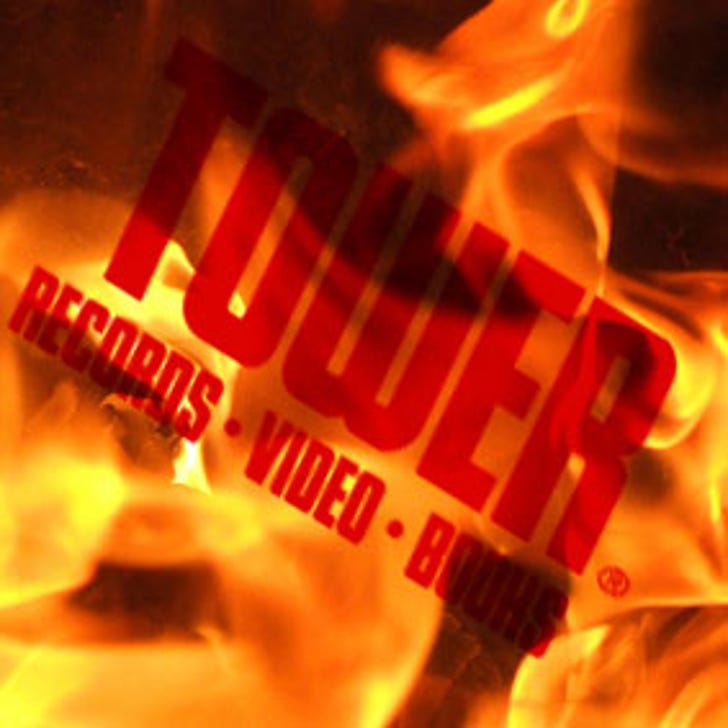 Sometimes, as the music business goes through yet another paroxysm of panic, one has to wonder: Really? Did they not see it coming at all?

Take for example today's Los Angeles Times piece about Tower Records, who is literally so broke that the record labels won't ship it any more records.

(That's when you know a patient is terminal: When even the doctors are like, "Cigarette?")

"Universal Music Group, Warner Music Group Corp. and EMI Group sources confirmed privately that each of the companies had stopped sending albums to the Sacramento-based chain, which has struggled with declining sales as digital technologies have changed the way consumers buy music."

Struggled? How about, "put it's head in the sand entirely"?

As the Times' piece notes at its conclusion, "This year the company installed in-store kiosks that would eventually allow customers to burn compilation CDs of current and out-of-stock songs. Last month the company launched a digital store where listeners could download individual tracks for 99 cents apiece."

At Warner Music, as CNNMoney reported yesterday, "sales of music in digital formats, such as mobile phone ring-tones or through online stores such as Apple Computer's iTunes and Napster, more than doubled to $92 million and now account for 11 percent of revenue."

The only other entertainment retailer as badly off as Tower appears to be Blockbuster, which Sumner Redstone shrewdly spun-off to suckers unaware of how screwed the company really was.

Then again, maybe not so shrewdly, since today a Blockbuster shareholder filed a class action lawsuit against Viacom's chieftain, alleging that Redstone lied about the company's health when he ditched his stock two years ago.

Last summer, Blockbuster was in nearly the same mess as Tower - so strapped for cash the studios were taking out insurance against DVD shipments lost to non-payment. But at least Blockbuster already had a digital store last summer, albeit one that, as Variety reported last week, has "gained only 100,000 Web customers in the [second quarter of 2006] and stills trails Netflix by nearly 4 million subscribers."

Tower and Blockbuster are bit like two dinosaurs looking up at the sky:

"Pretty!" replies Tower, pausing to ask innocently, "Why's it getting dark out so early?"