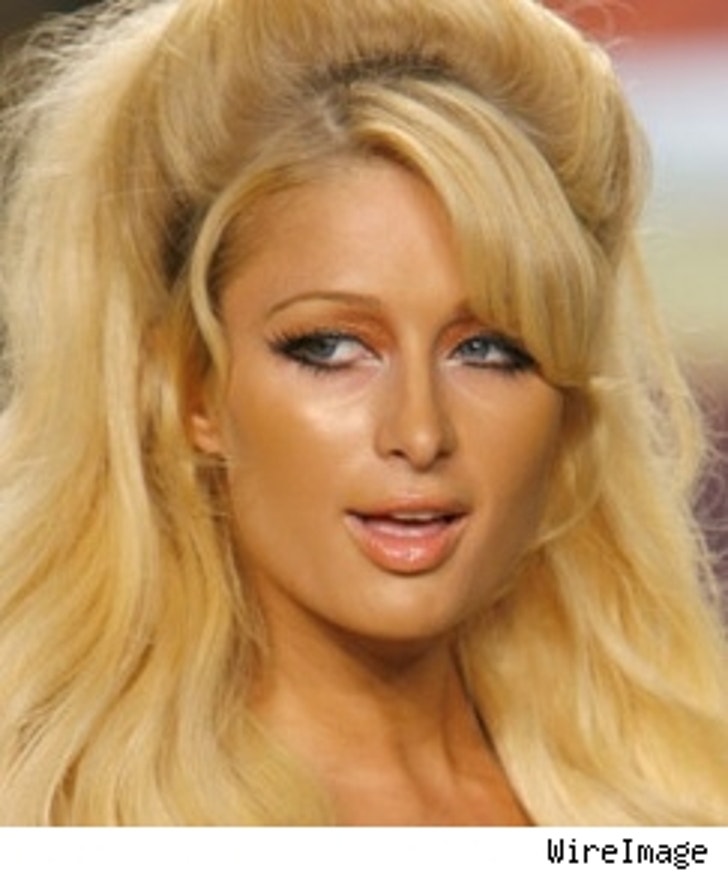 Paris Hilton may be a little, um, forgetful from time to time, but there's one lesson her daddy taught her that she always remembers: If you capitulate to a blackmailer's demands, "then you're gonna be paying for the rest of your life."

In police investigations related to a robbery of "Girls Gone Wild" producer Joe Francis, the lodging heiress says that she's not an entirely reliable witness, but reveals that "private tapes" were taken from her home and that mystery callers have been trying to get her to pay up for them.

Hilton had some knowledge of what happened to Francis' house in 2004 (though nothing self-implicating), and Los Angeles Police Department detectives are heard trying to extract it from her in the tapes, which will air on Saturday night on "Dateline NBC." According to Page Six, the clearly put-upon Hilton says, when interrogated, "Like I really ... I don't remember. I'm not like that smart. I like forget stuff all the time." Still, when it comes to her own tapes, Paris says she refused to give in to the alleged extortionists, who haven't been identified.

It's so long to bubble-gum roles for Angelina Jolie: the distaff half of Brangelina has been cast in the lead role of Ayn Rand's iconic novel "Atlas Shrugged" for Lions Gate Films, according to Variety this morning. The actress will take on the challenging, conflicted character of railroad executive Dagny Taggart in the Rand adaptation, a film that other producers have tried to bring to the big screen for years -- Faye Dunaway was once considered for the same role.

And it's just the latest in a run of very weighty, thesp-y upcoming roles for the one-time Lara Croft. She'll be in "Beowulf" and Robert DeNiro's "The Good Shepherd," as well as tackling the difficult job of portraying Mariane Pearl, the widow of murdered journalist Daniel Pearl. How about something that Maddox, Zahara, and Shiloh can watch their mommy in? Oh, right – Jolie's also lending her voice to "Kung Fu Panda."

Meanwhile, the Jolie-Pitts have created a new charitable foundation that will aid humanitarian causes around the globe, and their first give will be $2 million – half to Global Action for Children, and the other half to Doctors Without Borders.

Blackberry-wielding supervixen Naomi Campbell doesn't just smack down her employees – she's also taken down the asking price on her duplex apartment in Manhattan, according to the New York Post's Braden Keil. The Park Avenue pad has been re-priced at $4.95 million, down just a bit from the $5.25 million she listed it at in June.

The condo is plenty big (three bedrooms, four baths), but what really caught Keil's attention in the listing was the professiona-grade kitchen (probably not a priority for supermodels) and, in particular, the knife collection mounted on the kitchen wall, which should cause potential assistants no end of fear.

Apparently Michael Jackson has taken a liking to small, furry men in green hats and pointy shoes: A report in today's Irish Daily Mirror (via MSNBC) says that the erstwhile King of Pop has been spending a lot of time in the Emerald Isles, and would like to open up a leprechaun-inspired theme park

Reports have circulated that Jacko might be looking to be an estate and settle in Ireland, and, indeed, Jacko-spotting has become something of a sport among the Irish: one newspaper even has a Wacko Watch Hotline for readers to call in sightings. Where the cash-poor Jacko would get the money to pay for all of this is unclear, since the park would cost about $635 million to create.

Well, that explains the dance-floor chemistry: Mario Lopez is dating his partner on "Dancing With The Stars," Karina Smirnoff, says Us Weekly, which adds that the pair have been together since August ... Connie Chung says everyone who's nitpicking Katie Couric in her first weeks as the new anchor of "The CBS Evening News" should "leave her alone!" And, she tells Lloyd Grove, even though Couric's getting paid a lot more than she ever did when she shared the job with Dan Rather, Connie says you go, girl: "Roll up the Brinks truck!" ... Faced with budget cuts imposed by NBC, "Saturday Night Live" has given the pink slip to three performers, including longtime cast members Chris Parnell and Horatio Sanz, as well as Finesse Mitchell. Tina Fey and Rachel Dratch have left to do "30 Rock." The five cast members won't be replaced, leaving Lorne Michaels with just 11 players.