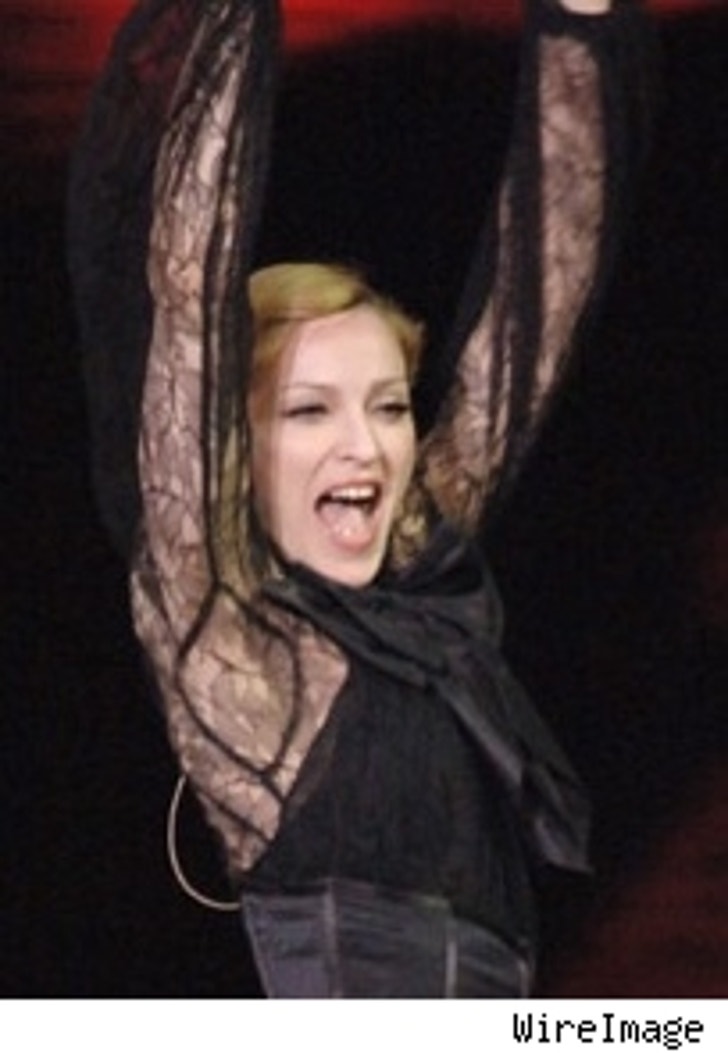 Madonna has finally spoken out about the controversial mock-crucifixion scene in her "Confessions" world tour, and she thinks that if Jesus were a global pop icon he would hang himself from a big, lighted cross on stage as well.

As NBC vacillates over whether it should air the provocative portion of Madge's show in its broadcast special in November, Madonna decided to respond to all the criticism, saying in a statement that putting herself up on the cross "is no different than a person wearing a cross or 'taking up the cross' as it says in the Bible ... it is my plea to the audience to encourage mankind to help one another." And then: "I believe in my heart that if Jesus were alive he would be doing the same thing."

Whatever Jesus might do, Madonna is certainly raking it in: The "Confessions" tour has brought in $193.7 million from its 60 shows, making it the highest-grossing tour ever by a female artist, surpassing the $192.5 million Cher made over 273 shows during her nearly three-year "Farewell" tour of 2002-2005.

Hugh Grant Gets Snippy With Snapper

Once again, Hugh Grant has decided that he doesn't appreciate the attention of photographers. Lensman Bradley Case was taking shots of Grant in London yesterday when the actor said to him, according to Rush & Molloy, "You're nothing but a stupid t***. If you don't f*** off, I'm gonna cut your b***s off." After his tirade, alleges Case, Grant actually slapped him "hard across the face." The photog is planning to press charges. No word from Grant's rep about the incident, but it's not the first time that he's had a run-in with the paparazzi: Earlier this year, Grant allegedly tapped a lensman with a manila folder in New York during an altercation near Central Park.

Leo Gets Smaller Place For Mom Than Himself?

Leonardo DiCaprio is getting a place for his mom – a nice gesture, to be sure – but he's got a very specific size in mind for his mama's pad. "I'm purchasing a new place for my mother, but it has to be more than 1,400 square feet," he tells Page Six. Well, Mrs. DiCaprio might wonder what's up when she sees her son's new place – Leo himself is in contract to get a $5 million penthouse in Hudson Blue, a swanky new development under construction in the Village, and those apartments definitely appear to larger than 1,400 square feet.

Now that he's turned 60, Donald Trump is thinking of his golden years, and yesterday he opened his first condo development aimed at "active adults" like himself. "I'm the poster boy for active adults. I'm 60, my wife is 30 and I just fathered a son. Doesn't get more active than that," said the billionaire in reference to his own "active" lifestyle. The $112 million, 141-unit building has one-, two-, and three-bedroom units that go for $500,000 to $1.2 million. And as is his custom (and prerogative), Trump has modestly named the development Trump Park Residences.

It might not be exactly period-appropriate, but they're cute: Sofia Coppola says that her brother Roman put a pair of pink Converse sneakers into a closet in her latest movie, "Marie Antoinette." The kicks appear for a split second amongst a lineup of French period footwear, and the LA Times wonders if there won't be a kerfuffle with Manolo Blahnik, who did the other shoes in the film ... First there was Dr. Melfi, and then Huff, and now HBO is bringing Gabriel Byrne to its network as a therapist who seems cool and collected with his patients but turns out to be testy and self-doubting when he sees his own patients. The half-hour drama is called "In Treatment" and is based on a popular Israeli series of the same name.