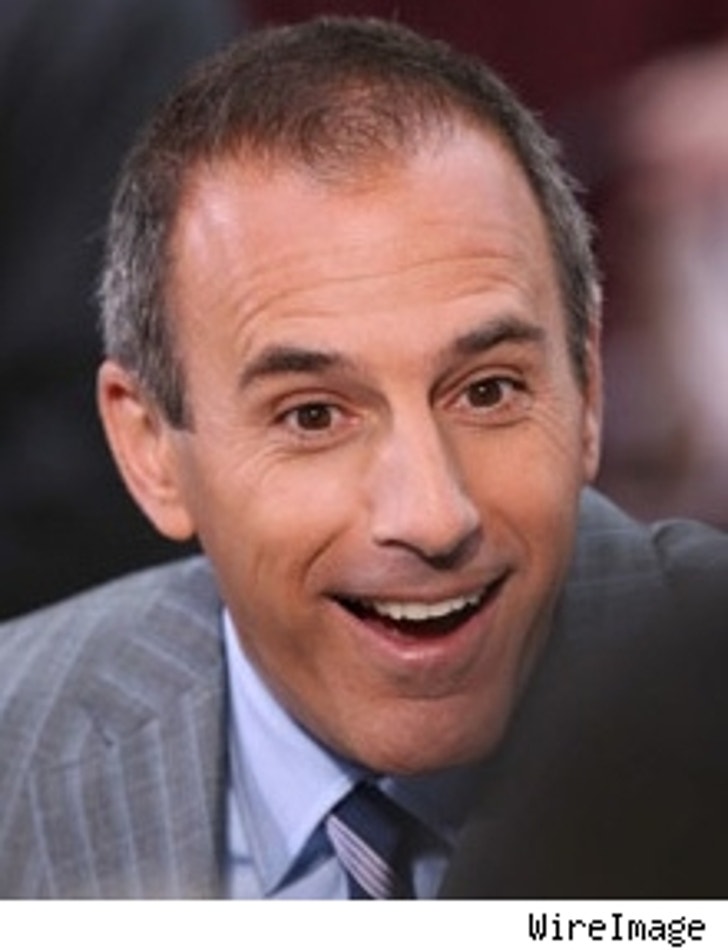 So are they or aren't they? As they await their third child together, Matt Lauer and his wife Annette are trying to keep their marriage from dissolving completely.

On Sept. 13, Annette Roque filed a petition in Manhattan Supreme Court seeking a split from her husband, but, according to Rush & Molloy, the former model is withdrawing the petition, and a rep for the couple says today that they're "not getting divorced." Last spring, the Lauers separated, then reconciled. It is unclear when the Lauers will welcome their impending arrival.

K-Fed To Get $10 Million After Split

If you were K-Fed, would you be taking care of the babies? Page Six reports today that Kevin Federline's walk-away package, in the event that he and wife Britney Spears ever split up, is $10 million – much more than has ever been reported. "Britney was leaving Kevin but then got pregnant again," according to a "frustrated family friend." He would have gotten his $10 mil – but has apparently stuck around at least to reap the professional fringe benefits of his rather more famous wife, like cameo appearances on a TV show and a rap album.

Tori Preggers -- Will It Fix Feud With Candy?

Tori Spelling, as many had suspected, is pregnant with her first child, and according to several reports today, she's three months into bringing baby along.

But it's still too early to tell whether the impending arrival will have any warming effect on the glacial rift between Tori and her mother Candy, who have had a very public tiff over the past year over everything from Tori's wedding to her inheritance to a tribute to her late father Aaron at the Emmy Awards.

According to People, the former "Beverly Hills 90210" star already plays stepmom to her husband Dean McDermott's 8-year-old son by ex-wife Mary Jo Eustace. McDermott also has a 1-year-old adopted daughter with Eustace. A friend of the couple says, "They're so excited."

Barbara Walters' interview last week with Crocodile Hunter Steve Irwin's widow Terri was a very big get for Walters and her network ABC – but at what price? According to Rush & Molloy, "sources inside and outside" ABC News are wondering whether a "licensing fee" that the network paid to the Irwin family of as much as $1 million is ethically acceptable. An ABC exec insists that the fee was more like "mid-six figures."

Still, a rep for ABC News says it's all on the up-and-up. "We do not pay for interviews. Period," says Jeff Schneider. "We paid a fair license fee for hours of exclusive material of Steve Irwin. Compensating rights-holders for their video is something that is a standard industry practice."

Though some ABC staffers were "taken aback" by the shell-out, Rush & Molloy also report that CBS offered even more for the same interview, which would have been done by Katie Couric. Even though CBS was willing to shell out a hard mil, the Aussies declined because Barbara Walters is better-known Down Under – because they get "The View."

The "Lost" boys and girls are finally back tonight, and the question that all the rabid fans of the show want answered, according to USA Today, is: Who are the Others, and what do they want with Jack? ... Actors Bradley Cooper and Jennifer Esposito, who've kept their romance very much under the radar, are engaged, says People. The marriage will be the first for both ... Jim Carrey and Cameron Diaz' much-hyped reunion flick, "A Little Game Without Consequence," has been shelved, says the Hollywood Reporter, making it the third movie in a row for Carrey to stall or shut down completely. Problems with the script are thought to be the culprit.