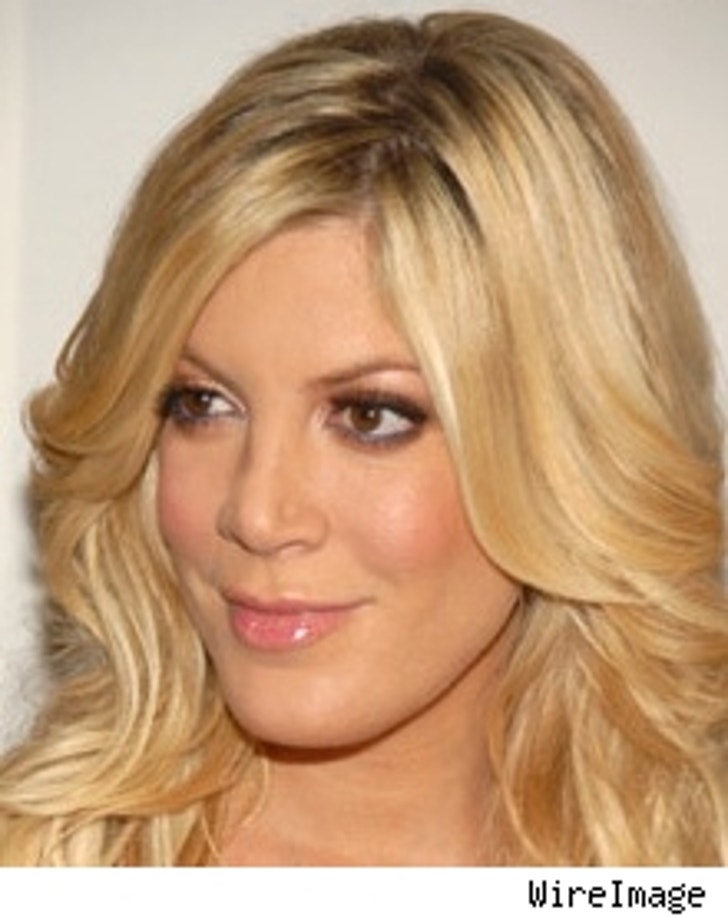 On the (very) short end of the inheritance from her late father's $500 million estate, Tori Spelling has now resorted to selling photos of her pregnancy to OK! magazine -- for a cool $250,000, according to a report in Page Six this morning.

But there are signs that a detente between Tori and her mom Candy may be in the offing. According to People.com, Candy is "ecstatic" that Tori is pregnant with hubby Dean McDermott. "If Aaron were here, I know how thrilled he would also be to share in such a happy occasion," Candy also told People. It's no secret that Tori and her mom haven't been speaking ever since Tori's dad, TV mogul Aaron Spelling, died in July. Tori told the press that she was upset that she heard about her father's death from a friend, and ever since then, the tensions have only been escalating, culminating in a tense Emmy Awards-night faceoff. Maybe a little grandchild will change the way Candy thinks of her daughter -- but will it make her cough up some cash?

Vanessa Minnillo may be romantically linked to Nick Lachey, but that doesn't mean that the MTV hottie doesn't attract the attention of other guys. Page Six reports that the "TRL" hostess was at an NHL party sponsored by FHM magazine the other night at New York club Marquee when she was "noticed" by two of the Carolina Hurricanes, Eric Staal and Eric Cole. Nick was nowhere to be found. Does this mean when Lachey's away, Minnillo will play?

If you'd taken bets on the fall TV season, you would've done well to bet against NBC and CBS. Both networks have given votes of no-confidence to two of their most expensive shows. NBC exiled its thriller "Kidnapped," which had been shown on Wednesdays at 10 p.m., to Saturday nights starting Oct. 21. They might as well have exiled it to Siberia, since that's a notoriously bad time slot. For its part, CBS took the star-studded "Smith," which featured such heavy hitters as Ray Liotta and Virginia Madsen, off the schedule and suspended production of future episodes. It even took the ominous step of removing it from its website. Meanwhile, ABC is in the catbird seat, with a revived "Desperate Housewives," the big Thursday winner in "Grey's Anatomy," and a fledgling hit in "Ugly Betty."

Donald Trump may not drink, but that's not stopping him from slapping his name on the high-end Trump's Super Premium Vodka, the first cases of which arrived at New York's Kennedy Airport yesterday. A one-liter bottle of the stuff will sell for about $30 ... Say goodbye to Tower Records -- but maybe you'll get a deal on some CDs. The famed music chain, which has been around since 1969 and currently has 89 stores in 20 states, was sold yesterday to liquidation company Great American Group for $134.3 million. Great American told the Associated Press that going out of business sales will start as soon as possible, and the company plans to sell all the store's locations and lay off around 3,000 employees.