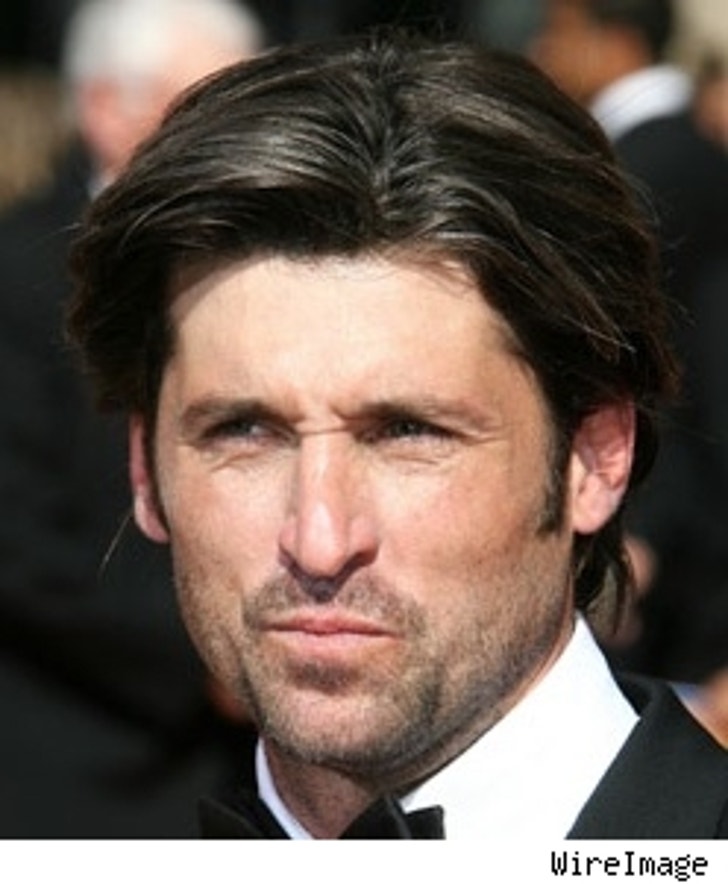 Patrick "Dr. McDreamy" Dempsey's pretty mug might've needed a little emergency care after a dust-up with his "Grey's Anatomy" co-star Isaiah Washington. According to Rush & Molloy, the simmering feud between Washington and Dempsey came to a head this week on set, when Washington said "some disgusting things" and got in Dempsey's face during shooting.

In fact, the National Enquirer had reported that Washington had choked Dempsey and shoved him, though other sources denied this. In the Enquirer's account, what started as an argument over lateness on set turned into a full blow-up. Dempsey's rep tried to downplay the incident, saying, "In any close-knit family, sometimes people argue. But everybody made up and went back to work." Neither Washington's nor an ABC rep had a comment.

Why all the commotion? It might stem, say sources, from Washington's frustration that Dempsey has become the poster boy for the show. According to Rush & Molloy's source, Washington "has issues. There's an underlying jealousy."

Her publicist may have denied it, but it looks like Madonna really did adopt a child in Malawi – and now the baby's father has come forward to confirm the news. Yahome Banda tells the Associated Press that the Queen of Pop visited the Hope Orphan Care Center in Mchinji, where his son had been living, and that Monday the little boy, whose mother died after giving birth to him a month ago, was taken to the capital Lilongwe where Madonna and entourage were staying.

Banda says that he's been told that the child, who will join Lourdes, 9, and Rocco, 5, in the Ciccone-Ritchie brood, will come back to Malawi frequently, and that even though he's losing his own son, he's glad: "I am very, very happy because, as you can see, there is poverty in this village, and I know he will be very well looked after in America."

Citing his "vulgar" lyrics, Chinese officials canceled rapper Jay-Z's debut in Shanghai later this month. "Some of Jay-Z's songs contain too much vulgar language," a promoter named Sun Yun was quoted as saying in the Shanghai Daily, and as a result the scheduled Oct. 23 gig at the Hongkou Stadium has been unceremoniously dropped. Of course, the standard of vulgarity for the Chinese appears to be fluid: the Rolling Stones and Black Eyed Peas have been allowed to perform in the country.

Tara Reid has been under the knife more times than she'd like to admit – but now, the actress tells Us Weekly all about the ordeals she's been through with her boob job as well as a botched liposuction procedure. As for the breast augmentation, Tara says that she had it done to even out her breast size ("the right one was always bigger than the left") and that she got C-cups rather than the big Bs that she wanted. And she even admits that potential suitors were grossed out by the implants.

Katie Holmes has found a Karl Lagerfeld-designed Chanel gown to wear for her impending nuptials, according to Star magazine (via MSNBC). During her myriad (and well-photographed) excursions with Victoria Beckham, the future Mrs. Cruise scoped out Lagerfeld's wedding dresses ... "Entourage" creator Doug Ellin's next show will be about a rich guy and his buddies – except this time, the rich guy is really, really rich, because he's a hedge-fund manager. "They make Vince look like a peasant," says Ellin in Variety ... Online betting site bodog.com is pegging the future nuptials between Johnny Depp and Vanessa Paradis – which are rumored to be happening sometime soon according to British tabs – as a dead heat. So bet accordingly.