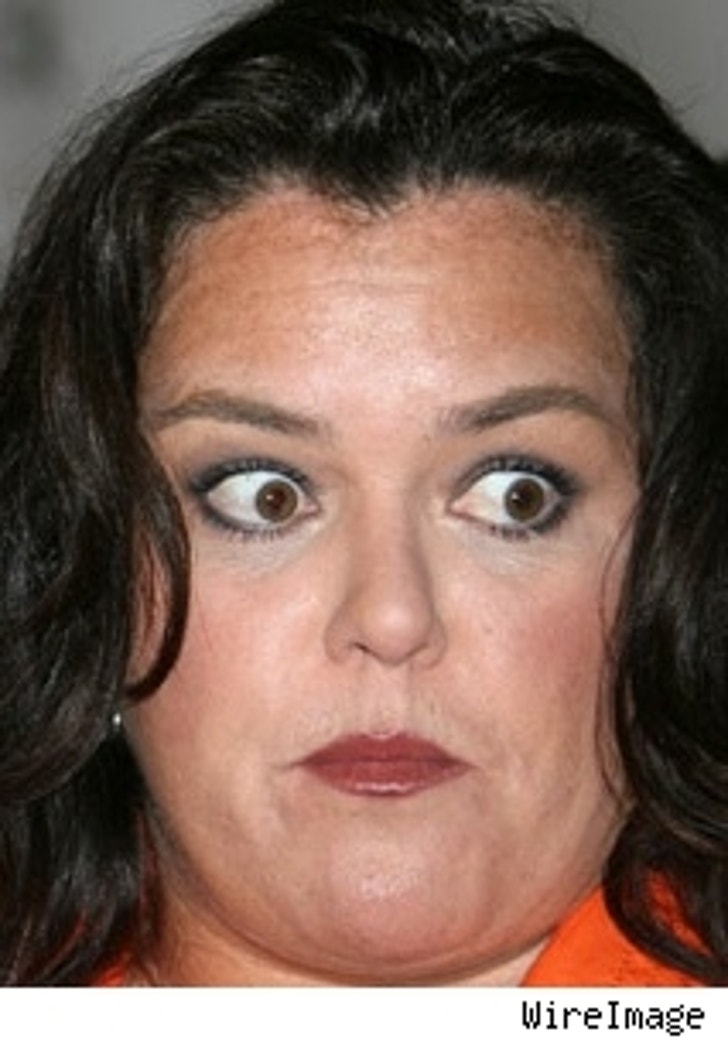 Wonder how Babwa's going to feel about this: Rosie O'Donnell is in talks to star in her own primetime drama from the creators of "Nip/Tuck," and she'd star as the caustic, diarrhea-of-the-mouth-plagued lottery winner Dawn Budge, whom Rosie memorably portrayed in a much-buzzed-about guest-starring turn.

And, says the New York Post, the show is already generating such word-of-mouth that Nicole Kidman wants to be in the pilot. We're not certain that any scene could top the one in which Rosie pays Julian McMahon's character 100 grand for a schtupping, but we've learned not to doubt Ro. Says O'Donnell's rep, "They're in talks to do a show that would film in New York. I don't know about Nicole."

Lindsay Ditches Tinseltown – For a While

Could Lindsay Lohan be the next celeb to make her own personal voyage to Africa? Sounds a little like it: The raven-haired starlet says she needs a break after a rather tumultuous year, in which she loved and lost, got publicly scolded by her boss, and generally got herself photographed and chronicled more faithfully than anyone west of Paris Hilton. "I might take a vacation – take a year off," said Lohan recently, according to MSNBC. "I want to travel and learn more about other cultures. The more I've grown up, the more I want to do that." So says the actress, all of 20 years old.

He may be heir to a multi-billion-dollar fortune, but apparently Brandon Davis can't quite keep his finances straight. After publicly humiliating Lindsay Lohan for "only" making $7 million in his infamous "Firecrotch" video, the grandson of oilman Marvin Davis bounced a $10,000 check he gave to "Girls Gone Wild" creator Joe Francis and, according to Page Six, owes money to record producer (and fellow Paris acolyte) Scott Storch, as well as Palms casino owner George Maloof.

The Post obtained a copy of the check, which was returned for "insufficient funds," though Greasy Bear himself says that the check had bounced because he was "switching banks" and that he paid Francis back in cash, which Francis says isn't true. A rep says that there's "no truth" to the rumors.

It's nearly axiomatic by now: Put a horror flick up around Halloween, and it'll score. It certainly held true for "The Grudge 2," which despite critical drubbings all round (for those that could see it), scared up $22 million in its opening frame. The film, starring Amber Tamblyn as the sister of Sarah Michelle Gellar's character from the first "Grudge," and haunted by the same angry spirits. Martin Scorsese's "The Departed," meanwhile, had another strong weekend with $18.7 million, putting it in range of passing "The Aviator" as Scorsese's highest-grossing film ever. And Robin Williams' political comedy "Man of the Year" debuted in third place with $12.6 million.

Scarlett Johansson will take up the mike to record an album of Tom Waits songs, says FOX News' Roger Friedman. The Sexiest Woman Alive (this year) has signed a deal to make her first record, called "Scarlett Sings Tom Waits," which will be released next spring on Atco ... Leonardo DiCaprio sees all green when it comes to his cars – he is rarely seen driving in anything but hybrid cars – but his long-haul transport is still a gas-devouring private jet. Last week, DiCaprio, his mother, grandmother, and galpal Bar Rafaeli took a jet to Rome from Paris prior to the premiere of "The Departed" there, says Page Six ... Janet Jackson's boyfriend Jermaine Dupri is upset that Janet's album "20 Y.O." has sold so dismally in its first two weeks of release (dropping from no. 2 to no. 9 in its second week on the SoundScan chart), and he's blaming Virgin Records, the label at which he himself is an executive. Rush & Molloy say he's threatening to quit.