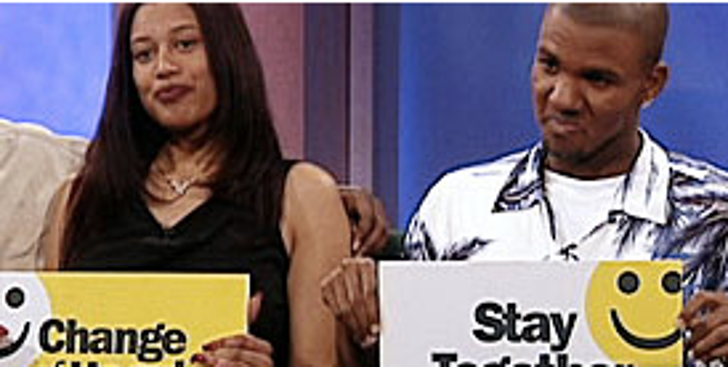 Is The Game a cry baby with nothing to offer in the sex department? That's what one of his ex-girlfriends seems to think.

TMZ dug up an old episode of the popular dating show "Change of Heart" from 2000, where the platinum selling rapper, unknown at the time, takes one of the worst beatings of his life from a former lover ... keep in mind he's been shot several times since.

The Game, then 21 years old, claims he called up the show to test the strength of his love for then-girlfriend Sadita. What ensued was 30 minutes of pure humiliation.

First, Sadita exposes The Game's secret emotional side to the world claiming "All he do is smother me or cry like a baby. That's all he does." Then, she put his appearance on blast, claiming that she can't stand looking at his ugly nose. Later in the episode, The Game's "Change of Heart" date, Arana, described an intimate moment between two, saying, "He made a comment that he was going to show me what he has later on." Sadita quickly replied, "Which is NOTHING!" Ouch. That's a kick to the manhood, isn't it?

Next target was The Game's ride -- or rather, lack thereof. "He's a scrub, he doesn't have a car, and I feel like I always have to drive him around" Sadita said. The Game aggressively responds, "I've got a suspended license ... but when I did have wheels, it would roll straight over hers and his bucket."

Our favorite moment has to be when Sadita attacks The Game's ambition and potential. "He has nothing going for himself." Smart move Sadita. Smart move.

The final humiliating moment occurs during the moment of truth, when JT and Sadita are forced to choose whether to stay together, or end the relationship. JT professes his love for Sadita and flips a card that says "Stay Together." Too bad Sadita has a "Change of Heart."

The Game's new album, "Doctors Advocate," hits stores November 14. No word on what Sadita is up to these days.