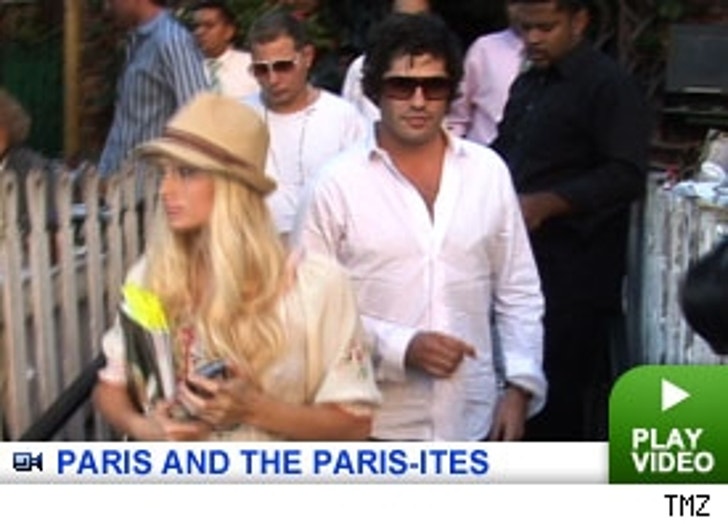 A variety of Tinseltown species -- legends, funnymen, starlets, greasily dissolute oil-fortune scions -- were spotted by our very own G-Hollywood this weekend in the most primal of states, right around feeding time.

First, we caught Paris Hilton and her perpetual wingmen Brandon "Greasy Bear" Davis and Scott Storch emerging from that obscure culinary hideaway the Ivy after a spot of lunch, and Paris momentarily forgot what her car -- "Oh right, the enormous silver Range Rover" -- looked like. Later, Benji Madden of Good Charlotte eschewed vehicular transport altogether, though we suspect he was more than happy to show off his female companion's rather prize gams to the passing traffic. Then, Sharon Stone came out of Mr. Chow with a conspicuously immutable expression on her face, which she used to great effect to ignore the pleadings of assembled autograph seekers.

And we spotted a random panoply of stars at one of the season's most glittering events, the Carousel of Hope Ball at the Beverly Hills Hilton, hosted by Greasy Bear's grandma herself, Barbara Davis, which raised an astounding $70 million for juvenile diabetes research. From Jay Leno to Warren Beatty to Usher to Jeremy Piven, there was plenty of star wattage to spare for our cameras. And no doubt pounds of rubbery chicken breast to spare as well.