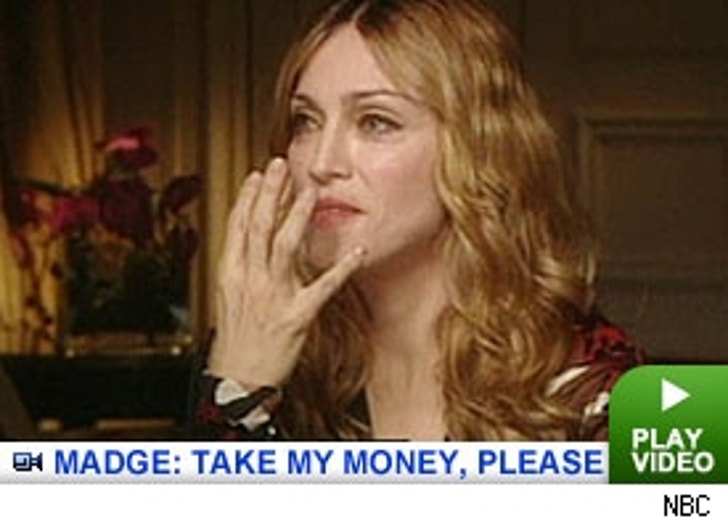 Madonna claimed this morning that she initially tried to give her recently -adopted baby's father money, so he could raise the boy himself, but he turned her down. And this, said Madge, she took as a sign that she should adopt him herself.

The Queen of Pop told Meredith Vieira on "Today" that she "couldn't really understand" Yohane Banda's decision not to take her money, especially because he had "moved to another village and was kind of getting on with his life." When he declined the money, Madonna said she regarded it as "my sign that ... it was my responsibility to look after [David]."

Madonna also defended her decision to get little David indoctrinated into the Kabbalah fold early. "I believe in Jesus and I study kabbalah," she said. "So, I don't see why he can't, too." And as for David himself, Mama Madge said that the kid (like his adoptive mother) has "a terrible temper," that he's "flirtatious," and "hysterically funny."

The demise of Reese Witherspoon and Ryan Phillippe's marriage was said by TMZ sources to be "cumulative," and Phillippe's growing affection for Aussie actress Abbie Cornish, as Us Weekly reports (via Page Six), may have played a hand. An Us source says, "Ryan admitted it was true and said, 'We need to just end this.' Reese literally had no choice." Phillippe and Cornish, as several sources have reported, grew close in Austin, Tex., as they filmed the indie production "Stop Loss." Regardless, the split continues to take its toll. "We're a little bit devastated and heartbroken," Ryan's mom Susan said.

Jenna Jameson Too Hot for Marines

Porn star Jenna Jameson's ample, um, armaments are apparently a little too offensive for those buttoned-up Marines. The sex star's boyfriend, ultimate fighter Tito Ortiz, was asked by Marines in San Diego to be a guest of honor at a birthday ball, but was then disinvited when Marine honchos found out that he would be bringing Jameson with him, says Page Six. Maj. Jason Johnston sent Ortiz an email, saying, "There is some serious consternation here about having your girlfriend attend our ball. Of course I, and a lot of Marines, are very excited about it ... many of our commanders feel it might be inappropriate."

Anna Nicole Smith has been hospitalized with pneumonia at the same Bahamian hospital where her son Daniel died in September and where she had her baby Dannielynn. The former Playboy Playmate, according to attorney Wayne Munroe, contracted "a slight case of pneumonia" brought on possibly by "a sudden change of weather" in the Bahamas. Munroe says the hospitalization was more a precaution because Smith had just given birth. Meanwhile, the lawyer adds that Smith has filed suit against G. Ben Thompson, the South Carolina developer with whom she had a previous relationship, over the ownership of the waterfront mansion where she's been in seclusion since Daniel's death.

Britney Spears has been working hard to get into fighting shape for her career rebirth, and she celebrated dropping down to a size 6 by spending nearly $10,000 in one hour at Barneys in Beverly Hills, according to In Touch Weekly (via MSNBC). No tracksuits were bought, says the mag, but "soft, clingy" sweaters were ... The New York Post's Adam Buckman has seen the "Mel Gibson" episode of Law & Order, which will air this Friday, and the fake Mel sounds very much like the real Mel, at least when it comes to his anti-Semitic rage. "They suck the money out of this town," says the character, played by Chevy Chase. "They send it to Israel so they can make bombs and matzoh!" Do you think the real Mel knows what matzoh is? ... Alec Baldwin, not generally known as a supporter of Republicans like California Gov. Arnold Schwarzenegger, has asked to have his narration removed from a documentary called "Running with Arnold" about the Governator because he thinks that the filmmakers have gone too far by associating Schwarzenegger with Nazi rallies.