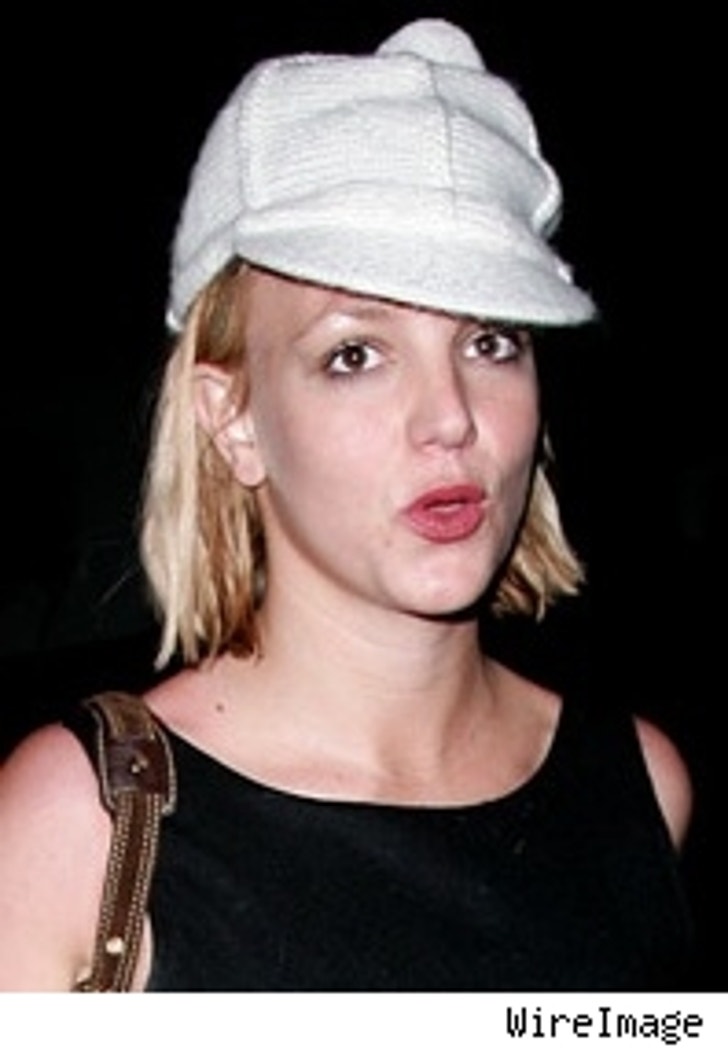 Britney Spears really doesn't want K-Fed feeding off her anymore, so much so that she's willing to give away the first photos of her baby Jayden James for free – just to avoid having to satisfy little-known clause in the couple's pre-nup guarantees that Fed-Ex will get a portion of any proceeds from selling snaps.

According to Women's Wear Daily's Memo Pad column, the pop princess has decided to offer the pictures free, but not to the usual outlet for her photos, People. Instead, she'd like to follow in TomKat's footsteps and get them into a more highbrow monthly or bimonthly. People, for its part, says it would be "more than happy" to have the snaps.

Meanwhile, according to several ticketing websites, two of K-Fed's gigs, last night in Cleveland and tonight in Atlantic City, have been cancelled. The gigs in Federline's native southern California are still good to go, but they're not scheduled until just before Thanksgiving.

Cameron Diaz wants a new nose. Actually, Cameron Diaz needs a new nose, or so she says. "I'm getting it fixed," says the actress, not known for a particularly protuberant schnozz, a la Jennifer Grey, to W magazine (via People). "I can't take it. I cannot breathe at all." Diaz explains that she broke her nose for the fourth time while surfing a few years ago and that as a result, one side of her nose is "totally shattered," and that her septum (the thing that divides the two sides of your honker) is like "a train derailed." Well, if the notoriously paparazzi-unfriendly Diaz was looking to deflect attention away from herself, this particular rhinoplastic admission wasn't the way to do it.

Actress Pamela Anderson and her husband, Kid Rock, have suffered a miscarriage, reports Us Weekly. Anderson's rep confirms that the actress suffered the miscarriage last week in Vancouver during the filming of her movie "Blond on Blonder." An Us source says that Anderson "was not far along" in the pregnancy, and that "it was early enough." The source also says that the actress didn't go to a hospital, and that the stress of filming contributed to the miscarriage. Anderson has two kids from her marriage with husband Tommy Lee: Brandon, 10, and Dylan, 8.

P. Diddy claims that he and girlfriend Kim Porter have had sex for as long as 28 hours, according to an interview he gave to Giant magazine (via Rush & Molloy), because of the same kind of "Tantric discipline" that Sting once boasted about. Of course, Sting later admitted he was joking about having sex for seven hours ... Kathy Griffin is so stoked about her mansion in Brentwood, she leaves it all the time. "This is why I am on the road for months at a time, so I can live here," said the comic to her guests at her 46th birthday party, according to Page Six. "I love this house more than any person or thing, except maybe my dogs." ... Eminem has signed a deal with powerhouse agency ICM, and will return to Hollywood in full force. He recently turned down an offer of $8 million to star opposite Samuel L. Jackson in a Doug Liman film called "Jumper," but will be in a new remake of the western "Have Gun, Will Travel."