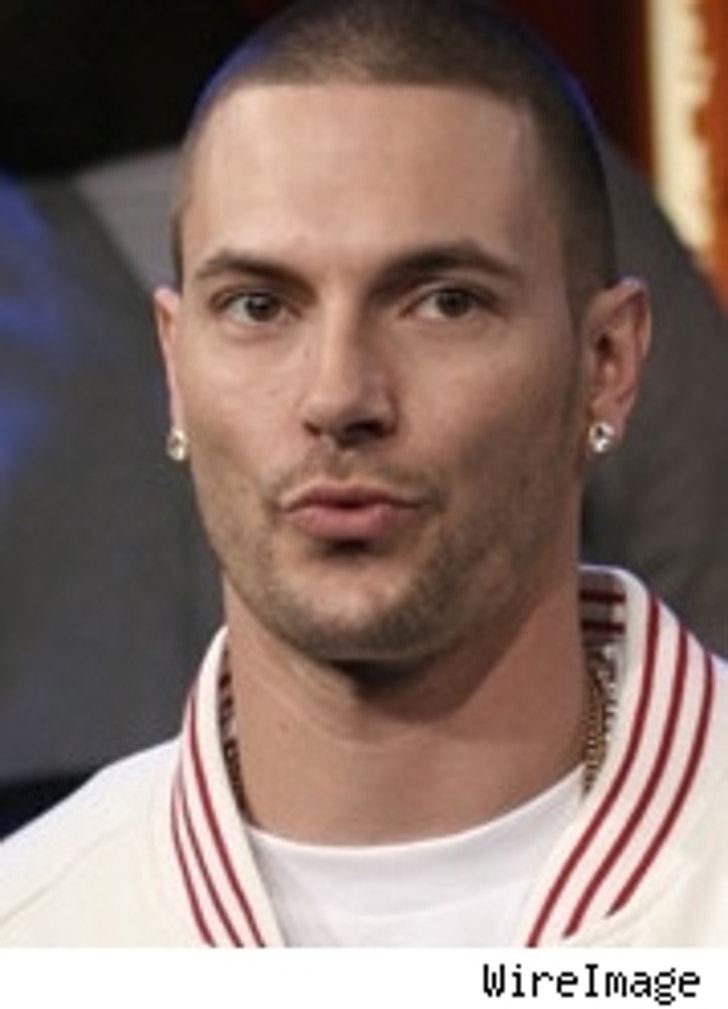 Kevin Federline is hawking just about anything he can get his hands on to make a buck – including scintillating footage of people taking pictures of him from cameras installed in his truck.

The Fed-Ex already made $2 million, as Page Six points out, from selling his home video footage for the UPN show "Chaotic," but of course that actually had Britney Spears in it. Federline's pitch for his truck cam material? "I got some pretty funny video footage of them just tripping all over themselves like dominos."

Meanwhile, could Britney be the new Whitney? USA Today points out that that both pop megastars are getting out of horrible relationships, looking mighty fine, and revving up for musical rebirths next year.

Katie Holmes and Victoria "Posh Spice" Beckham were seemingly celebdom's new BFFs after their appearances in Rome together, but now they're taking a break, and, according to Page Six, it's because Posh's severe dietary ways were just too much for Katie. According to one source, "Victoria maintains her tiny frame because she only permits herself to snack – not eat – on edamame, pretzels, and occasionally sushi." And Beckham apparently hasn't drunk water because "she doesn't like the taste." Whatever Katie's doing, it's keeping her man Tom Cruise happy – Rush & Molloy say that the pair were "Velcro'd" to each other at a recent New York event.

Jude Law and Sienna Miller, the world's most indecisive couple, have finally "split up for good," according to a source in People. "It's a mutual decision. They have definitely come to the end of the road," says a pal of the actor. Reps refused to comment on the split, but it's certainly not the first time the pair have split, and it might not be the last. Apparently Jude's devotion to his children (which he had with Sadie Frost, not Miller) and his continued closeness to Frost caused issues in the relationship. The couple met on the set of "Alfie," and they were engaged on Christmas Day 2004.

"Borat" took the box office crown once again this weekend with $29 million (in a much wider release) to remain the no. 1 movie for a second straight weekend, according to studio estimates, giving it a ten-day gross of $67.8 million, and putting it on course to pass $100 million by Thanksgiving. "The Santa Clause 3" and "Flushed Away" stayed in second and third place, while Will Ferrell's new comedy "Stranger Than Fiction" ended up being the best of the debuts, with $14.1 million. The gentler side of Russell Crowe also ended up being much weaker at the box office: "A Good Year" finished with just $3.8 million to land in 10th place.

The creators of "24," Joel Surnow and Bob Cochran, have come up with a new real-time medical comedy called "The Call," which focuses on best friends who are also paramedics, and who "save people's lives while screwing up each other's" according to the Hollywood Reporter ... Procol Harem's megahit "Whiter Shade of Pale" has given rise to a lawsuit between former members of the '60s band who want their chunk of the royalties from the 1967 song. ... Former CNN anchor Daryn Kagan has left the network and today begins telling "inspirational" news stories on her website, DarynKagan.com.