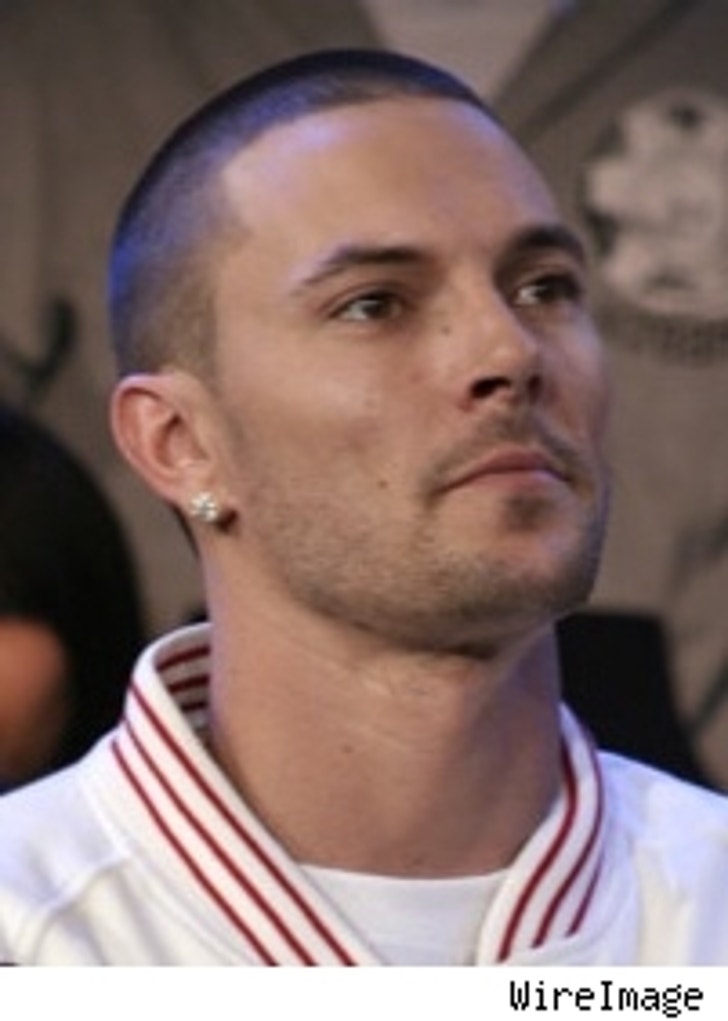 It seems that the days of wine, roses, and private jets are long gone for Kevin Federline -- now he's just another putz with a record contract and a bad haircut. Instead of flying to Miami, as would have been his custom just days ago, Federline took the loser cruiser -- a bus! -- to South Beach, where he cheaped it out at a lower-rent restaurant than his caviar tastes have been used to, then did a little (window) shopping on Lincoln Road.

Indeed, says Page Six, K-Fed took his posse of six out to the stores, but didn't (or couldn't) buy them anything, and then, when it was time to roll with the big spenders at the nightclub Mansion, everything was – now this is more like it – free. He continues his budget tour of Miami today, and, presumably, as the "host" of a party at Mansion, won't have to shell out for anything.

Even though she wasn't, presumably, invited to the wedding, Tom Cruise's ex-wife Nicole Kidman was nice enough to send a gift, says People. Even though it isn't clear what the gift was, Kidman did append a note wishing them "a lifetime of happiness together." Cruise and Kidman, of course, were married for nearly ten years.

Meanwhile, the bridal party took over a restaurant in Rome called Nino, which is apparently one of Tom's favorites, according to People. The meal was off-menu, multi-course, and guests included Brooke Shields, Jim Carrey, Jenny McCarthy, Jennifer Lopez, and Marc Anthony, which strikes us as one of the more random collocations of celebrity "friends" ever. Cruise's "Mission: Impossible 3" director, J.J. Abrams, described the night as "fantastic."

Look out the next time you see Ellen Barkin and Ron Perelman at the same restaurant, or you might get drenched. The "Sea of Love" actress recently soaked her ex-husband, whom she now reportedly "loathes," with a glass of water when he approached her table at New York's Waverly Inn, then tossed off a searing one-liner to Perelman's date on her way out.

In front of all and sundry, Barkin, according to Page Six, warned Perelman as he walked toward her table not to come any closer. When he didn't oblige, she gave him a proper drenching with a full glass of water. Unfortunately, she also hit a nearby waiter, who luckily took her side in the very public melee between the actress and the Revlon chairman. "You don't have to apologize," said the waiter. "I read the papers." And as she left the joint, Barkin walked up to Perelman's date and said, "I feel sorry for you that you have to [bleep] him tonight." Barkin's rep had no comment, and a Perelman pal says that he was just heading toward the bathroom and called the attack "unprovoked." No word on the waiter's tip.

Cindy Streit, owner of the etiquette business who was the recipient of that plastic bag of poo at a dinner party in the film "Borat," says she filed a complaint yesterday with California Attorney General Bill Lockyer, requesting an investigation into possible violations of the California Unfair Trade Practices Act.

She says, as do other unwitting dupes involved in the making of the film, that they were told the movie would only be shown outside the US. Streit's lawyer, Gloria Allred, says that the film production company "Springland," said it would only be a documentary for Belarus TV and no other outlet. Fox calls the allegations "nonsense."

"Dancing with the Stars" runner-up Mario Lopez sniffs that he was the better dancer in the competition. As he tells the New York Post, "If figure if this was truly a dance competition they would have voted for the better dancer," adding that he couldn't have lost to a "better guy" than champ Emmitt Smith ... In the Dept. of You Can't Make This Sh*t Up, Snoop Dogg has introduced a line of dog apparel and toys, says Us Weekly, including chew toys that play Snoop songs, and a Doggfather hoodie sweatshirt ... LeBron James was at Manhattan hotspot PM the other night, but, like any self-respecting professional athlete might, didn't want booze by the bottle, so he was asked to move out his banquette, says Page Six. No matter, King James just headed over to Jay-Z's club 40/40 instead.