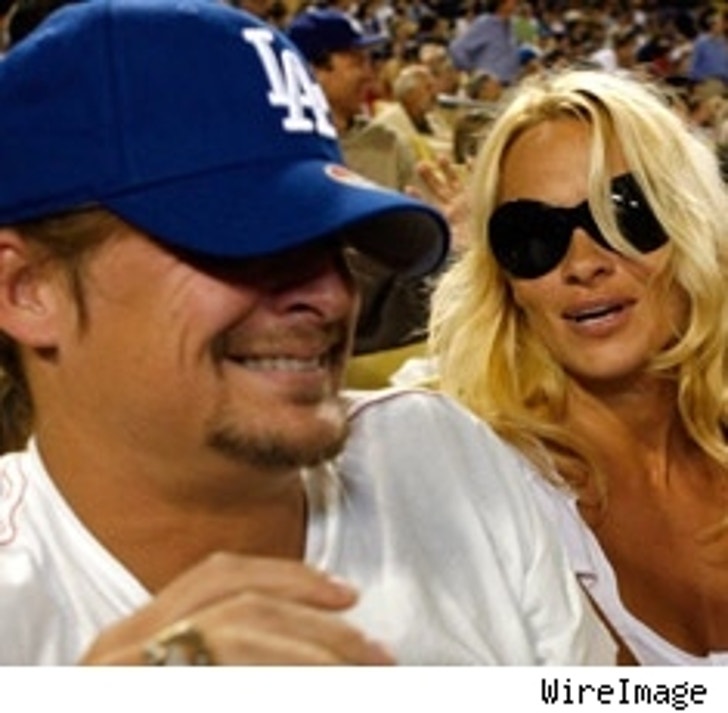 Now it's his turn: Kid Rock's friends say that he had to end his marriage to Pam Anderson because he was sick and tired of taking care of their kids -- while Pam would stay out 'til all hours.

Yesterday, it emerged that Pam couldn't deal with her rocker hubby's anger and insecurity issues, including a public blow-up at a private screening of "Borat," as Page Six reported. Today, friends of Kid (real name: Bob Ritchie) tell the Post that once he moved to L.A. from Detroit to be with Pam, Bob found himself constantly at home with his son (and Pam's two boys with Tommy Lee), while Pam was out carousing almost every night.

Ritchie's friends also say that he suspected that there wasn't really a miscarriage, as Pam claims, because he had never heard from her or anyone else that she was pregnant. Whatever the case, say the rocker's pals, "Pamela doesn't have the money in the relationship – he does." Pam's reps say she is "a wonderful mother" and "absolutely had a miscarriage."

Oprah's Movin' On Up To an Even More Deluxe Apartment

The Queen of All Media, Oprah Winfrey, has ditched her fancy duplex apartment in Chicago's Water Tower Place and will be moving to a new 5,000-sq. ft. pad on what's called the richest block in Chicago on East Lake Shore Drive, reports the Chicago Sun-Times. It's got even better views of Lake Michigan than she had before. O's apartment building once housed the late John Candy, and Meg Ryan also stayed there while in town. It's just down the street from the famed Drake Hotel, and was on the market for $6.2 million. No word on what O actually paid.

Could there already be trouble in paradise? After a week or so of constant sisterhood (i.e., partying until the wee hours, shopping, displaying their, ahem, goods for all the world to see), Britney Spears and Paris Hilton have their first official rift: Brit has backed out of co-hosting the Billboard Music Awards with Paris without giving a reason, just days before the show.

The newly-BFF pair were scheduled to share hosting duties at the show, airing live next Monday night, but Us Weekly reports that Brit pulled out late yesterday afternoon. Hilton might still host the show solo, though just in case she doesn't, Fox has another comely young starlet waiting in the wings ... Brad Garrett.

So we rolled our eyes at "Apple" and raised our eyebrows at "Suri" and "Shiloh." But now "Thijs"? That, folks, is the newest addition to the Matt Lauer – Annette Roque brood, according to People. The baby (a son) was born yesterday morning, and weighed 7 lbs., 4 oz., and parents and child are doing well. The name is pronounced "Tice" and is a common Dutch name (Roque is Dutch). The baby will join brother Jack and sister Romy in the household, though the child is surely already girding himself for a lifetime of frustrating and humiliating trips to the DMV and the dentist's office.

Tom Cruise and Katie Holmes have snapped up a six-bedroom "cottage" in the Dormans Park community outside London, says Us Weekly (via Rush & Molloy), to go with their house in Beverly Hills and their mansion in Telluride ... Page Six reports that on the set of "The Sopranos," Steve Schirripa (Bobby Bacala) was in the middle of a scene with James "Tony Soprano" Gandolfini, in which Bobby is supposed to head-butt Tony, except Gandolfini forgot to move out of the way, getting himself a bloody nose in the process. The nose is unharmed. The final episodes unfurl next year. ... Crikey! The hugely popular Australian children's group, The Wiggles (yes, if you have kids, you know), is expected to announce that their lead singer "Yellow Wiggle" Greg Page will depart the band after undergoing a double hernia operation last December and experiencing health issues since ... Nick Lachey and Vanessa Minnillo are house-hunting in L.A., says Life & Style (via MSNBC), and Minnillo is telling pals that she might quit her New York job to be out West with Nick.