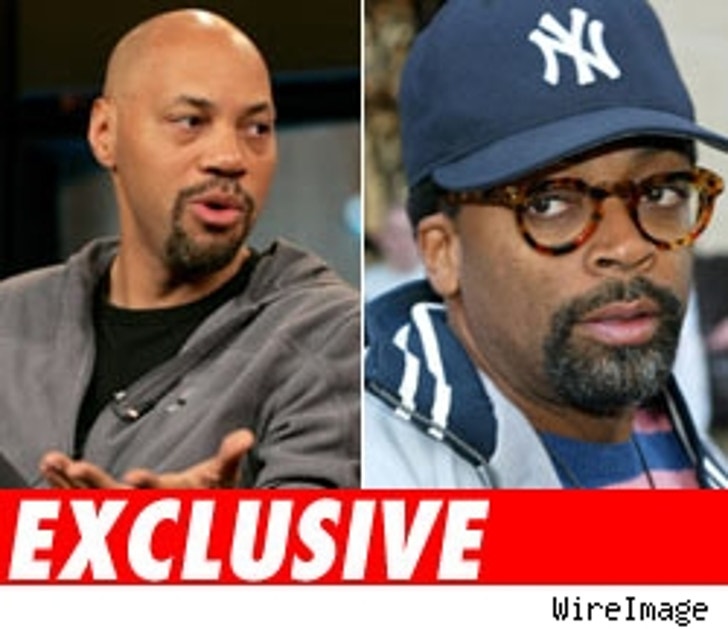 After Michael Richards' racist invective at an L.A. comedy club opened a new discussion about race relations in America, Universal Pictures is getting into business with a pair of pragmatists who don't fear a frank discussion of the N-word.

TMZ has learned that director Spike Lee is coming aboard a new film from Imagine Entertainment about the run up to the L.A. riots of 1992, and the aftermath, with a script written by John Ridley ("Three Kings" and "Undercover Brother").

It's been fourteen days since Richards harangue went viral, but over 14 years since a predominantly white jury acquitted four cops who were videotaped beating motorist Rodney King. On parole for a robbery conviction, King led cops on a high speed chase, then finally pulled over. Videotape showed him resisting arrest, with the LAPD tackling, tasering and beating him. The acquittal of the officers proved too much to bear, and it uncorked a spree of looting, arson and murder; 55 people were killed in L.A. on April 29, 1992.

If Ridley's propitiously timed article, entitled, "The Manifesto of Ascendancy for the Modern American Nigger" (now in the December issue of Esquire magazine) is any indication, his script probably won't give L.A. rioters a free pass based on shared skin color.

"...That which retards us is the worst of 'us,' those who disdain actual ascendancy gained by way of intellectual expansion and physical toil, who instead value the posture of an 'urban,' a 'street,' a 'real' existence, no matter that such a culture threatens to render them extinct. 'Them' being niggers. I have no qualm about using the word nigger. It is a word. It is in the English lexicon, and no amount of political correctness, no amputation into 'the n-word' -- as if by the castration of a few letters we should then be able to conceptualize its meaning without feeling its sting -- will remove it from reality. So I say this: It's time for ascended blacks to wish niggers good luck. Just as whites may be concerned with the good of all citizens but don't travel their days worrying specifically about the well-being of hillbillies from Appalachia, we need to send niggers on their way."

Lee has already weighed in on the L.A. riots in a previous film, albeit obliquely: The opening credits of his 1992 movie, "Malcolm X," show footage of the Rodney King beating.

More recently, the director has been interested in present-day social justice and race relations, exploring the abandonment of impoverished black New Orleans after Hurricane Katrina, as seen in his HBO documentary, "When the Levees Broke: A Requiem in Four Acts." Interestingly, the subject of black looting was again raised.

In "When the Levees Broke" Lee repeatedly interviews a 42-year-old woman named Phyllis Montana LeBlanc, a resident of N'awlins Lower Ninth Ward. "There were two things I asked Spike when we first met," LeBlanc told Newsweek, "First I asked him, 'Are you going to tell the whole story and make it clear that all black people aren't poor, ignorant looters?' And then I asked if I could cuss." She laughs. "When he said yes to both, I said, 'Hot damn, we've got a deal!'"

Universal didn't offer immediate comment other than to confirm the deal after checking with a spokesman for Lee.